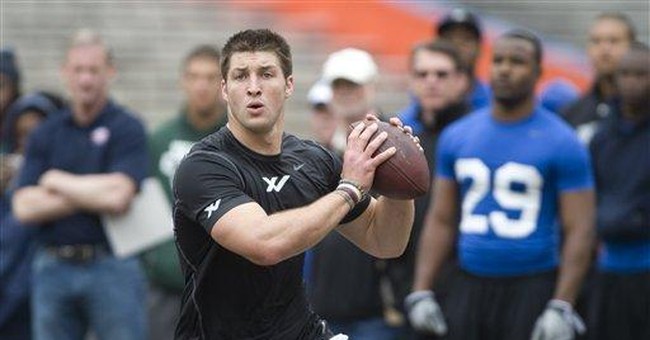 President Obama has never been one to tread lightly while insulting people's sports' sensibilities. It's just so awful that he exposes so much in the revelation of his elitist worldview while doing so.

From a purely campaign-based strategy viewpoint one would think that this path is counterproductive. After all you do want people's votes right?

"I've got to tell you, I don't like the idea of a quarterback controversy at the start of the season. If I was a Jets fan, I'd be pretty nervous," Obama said on a local sports talk show in Columbus, Ohio this week.

Evidently he's got the time.

Yes on a day when we learned that 163,000 new jobs had been created, while 365,000 new unemployment claims were simultaneously filed, and 150,000+ actually dropped OUT of the work force, I'm just thrilled to know, he's able to yuck it up with The Torg.

Sanchez "led them to the playoffs two years in the row," he said, "There's going to be a lot of tension in that situation."

Why Mr. President? Does having an exciting superstar sit as a back-up to someone who squeaked his team into the playoffs the last two years ever so threatening? Does Joe Biden scare you that much. (Of course we all know that Joe Biden was the biggest insurance policy against anything nefarious happening to our nation's top executive these last three years. I can't even say it without laughing, "President Biden?")

It is true, however, that Tebow wasn't able to lead his team to two playoffs in a row. After all he'd only been given the starting job for less than one season, but he turned a 1 & 4 Denver Bronco disaster into a Division winning, playoff team that beat the vaunted Pittsburgh Steelers on 316 yards passing.

Mark Sanchez did go to the play-offs two seasons in a row. But couldn't lead his college team to any higher than number two in the BCS ranks and quit after his junior year.

Tim Tebow won the BCS Championship in college in 2006. He was named college football's top player in 2007. He then returned to the college ranks for his senior year and led his team to the BCS Championship win in 2008. All this with supposedly a flawed throwing mechanism.

I'm quite sure that the results that Mark Sanchez has produced would guarantee him a starting spot for the upcoming season in the mind of President Obama. After all he's a "pretty smart" person, and one of those people who work "pretty hard."

Top that off with his very mediocre results and you have a classic Obama cocktail of "success."

Tim Tebow on the other hand, grew up as an abortion who lived. (The doctors in the Philippines literally told his mom to cut him up in the womb.) He didn't have the most talent of everybody out there. But instead learned how to honor his teammates, his family and his God, by putting the right priorities in order, and all he knows how to do is not make excuses for his play, but just to go out and win.

Now President Obama would have you believe that Tim Tebow wouldn't have gotten where he was without listening to everyone around him. But the truth be told if that had happened, he would've dropped out of football years ago.

Jets fans aren't nervous about Tebow Mr. President, their ecstatic. Here is a guy who doesn't blame others. He doesn't complain about how no one will work with him, or find a million excuses for his lack of results while on the job.

He just shows up, does the best he can the whole time he's there, and goes home and sleeps like a baby at night. How are you sleeping Mr. President?

President Obama doesn't like Tim Tebow being on the Jets because he might cause a quarterback controversy. Hardly...

It's true he had help from team mates, but the difference is, Tim Tebow knows how to use whatever situation he's in, to motivate, lead, take his team on his shoulders and set the example if necessary.

President Obama is learning how to play golf and knows how to... uh... campaign, and blame others for his lack of results.

So Mr. President why don't you become teachable, shut your flapper for once, and learn something about how life works.

Then when you've accomplished one tenth the stuff that Tebow has, maybe you can lecture someone about how to run a team, score a touchdown, create a job, run a small business, or sign the front of someone's paycheck.

Until then, I'm throwing in with someone with proven results... even if his throwing mechanism isn't perfect!