Why The Left Always Resorts To Brute Force 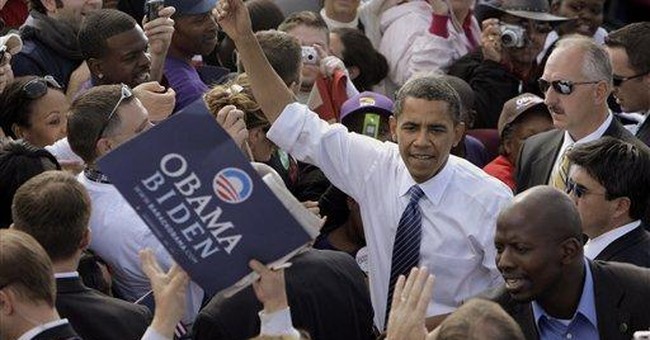 One of the perhaps most confusing sub-texts of the 2008 election has been the curious and in some cases surprising support that the candidates have and have not received from evangelical Christians. But if one looks at the record, and not merely the high rhetoric one thing for certain should be easily distinguishable - Barack Obama's record of votes, his view of government, and the ideas to which he aligns himself do not match the values, principles, and truths for biblical Christians.

Understanding this to be the case, and knowing that biblical Christians have a responsibility to act as wise stewards when casting their votes (render to Caesar, in our nation 'We the People' are Caesar etc.) it become imperative to speak with clarity on the issue.

For these few weeks my column will examine the most egregious examples of where Obama's record violates values, principles, and biblical truth.

After Barack Obama got rhetorically bludgeoned this week with the consequences of his own words to a working class guy from Toledo, the nation got a peek into his soul. It was not pretty and it should serve as a preview of what we can expect from Barack Obama towards those who disagree with him. It has been unattractive, unbecoming of someone running for President, and certainly riddled with hypocrisy and double standard.

Think about it. Just two days before Barack Obama eagerly walks up to a working "Joe," fields a question about his policies, and gives his answer.

Only two days later Obama, Biden, the DNC, and many in the mainstream leftist establishment (you call them the media) go wall to wall on the attack against... the man who asked the question, not the one who gave the answer.

Of course it was one of the worst answers ever given by any presidential candidate in history. I mean people in free countries generally decided a generation ago that when Government has sole discretion over the supply of money, where it goes, and who gets it (especially when disconnected from effort, work, or accomplishment) that the only ones who end up doing better are those running for office. If you get enough people so brain washed and brain dead that they "think" that they can live off the great government udder, then those who give access to such will enlarge their power, capital, and position. These people are Marxists. Conversely if you empower people to provide, care, and steward themselves and their families - the need for government begins to fade. These two principles and world views will always be at war with each other on the fundamental basis: Marx says let the state provide for you, the Bible says if a man does not work--he should not eat.

The Left, and especially Obama, are completely ignorant of the fact that the majority of Americans think Marxism is not just less attractive but immoral. It offends the decency and sensibilities of many a man and woman who work upwards of ten, twelve, sixteen, hours a day and find themselves punished for such hard work. (Also based in the Biblical truth found in the "Parable of the Talents.")

So when a working man, who does work twelve to sixteen hours a day, asks Senator Obama about the dream of his future, his hopes to someday, if he works hard enough, to be able to actually buy the company he works for, Senator Obama rhetorically pats him on the head and tells him to take his marxist plan and be thankful for it, the working Joe (gasp) disagrees.

Had the issue ended with that interchange on YouTube Barack Obama would've forgotten all about this working class guy and his dreams. But it didn't because to Barack Obama's great surprise his answer that government knew better how to "spread the wealth around," and the implication for working class people, that they would now be crushed under the economic plan Obama has put forward caused a lot of people to take pause.

McCain seized on Obama's gaffe and the working Joe became the star of the debate.

Yet here is the most troubling aspect of all. The Obama camp unleashed the hounds, not against his opponent's plans, records, or words from the debate. No. They rolled bulldozers into the life and background of a man who has worked in a blue collar job for most of his adult life, and began to look for any and every piece of suspect baggage that they could throw up to the media.

The next morning Biden openly sneers at working class people on the morning talk shows. In the debate Obama pretended as though Joe might not have even existed when he prefaced a response to McCain with, "Joe, if you're even out there..." And the one stayed on target at his next two rallies publicly and openly mocking a plumber's ability to ever make more than $250,000.

Isn't the American dream summed up in the idea that if you work as hard as possible that you can break through to new earnings? Isn't it the American ideal to base your economic rise or fall on the shoulders of your own efforts? Shouldn't the desire for social justice inform you that it is immoral to take what one has earned and give it to one who did not? (And please don't start with compassion... Genuine compassion is when someone who has earned it voluntarily gives it because he is so moved to help his brother in need. Mandating such violates the heart and the conscience.)

Team Obama's entire media operation became a heat seeking missile aimed at one target--destroy the working class person who dares to think, work, plan, and save for the benefit of their family, community, and nation. And do so especially if in the asking of honest questions you expose the leftist candidate in a presidential race to be the secret godless-worldview-marxist Barack Obama is.

One lesson learned from this week: when the left feel weakened they will level you with brute force, if necessary, to keep their stranglehold on the lifeline to our pocketbooks.

It is also clear that scripture teaches instead to treat those who disagree with us far different than that!