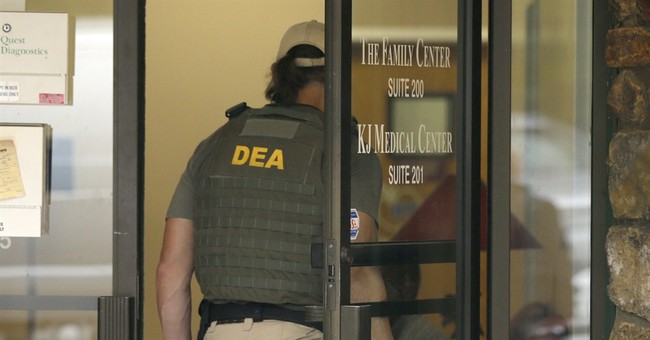 Joseph Rivers, an aspiring artist from Michigan, had his dreams shattered by federal agents. On a train to California, where he was going to start a video production business, he had his $16,000 in life savings seized by the Drug Enforcement Agency under the mere claimed suspicion that it was going to be used as drug money. A hunch or suspicion is enough for some law enforcement agents to seize someone's property and hold it until they prove themselves innocent.

As the Albuquerque Journal, which first reported Rivers' case, quoted the DEA agent in charge: "We don't have to prove that the person is guilty. It's that the money is presumed to be guilty."

This is the process of civil asset forfeiture, and some conservatives are now fighting back.

This summer, Rivers was in Washington, D.C. as a panelist on civil asset forfeiture reform for a summit put on by conservative groups Americans for Tax Reform and Right On Crime.

"There was nothing I could do," Rivers said. "I tried to ask him why, and he never really gave me a reason other than that he believed it was involved in illegal activities."

We are in the age of law enforcement reform. Incidents of alleged police misconduct from Ferguson to New York to Baltimore have put the national spotlight on the myriad number of ways that police can and have abused well-intentioned laws in order to insert themselves into the lives of innocent civilians.

After the tough-on-crime 90s, the conservative side of the political spectrum has often been presumed to be more friendly to law enforcement. With a proliferation of groups like the Institute for Justice and Right on Crime, and the launch of criminal justice reform projects at conservative mainstays like the Heritage Foundation and FreedomWorks, that tide has turned.

"It's a civil liberties issue, it's a due process issue, but first and foremost, it's a property rights issue," Jason Pye, director of justice reform for FreedomWorks, said. "This is legal plunder. What they're doing is wrong, and we need to fix this... I've been surprised at how activists have embraced this issue."

"People were watching Miami Vice, and criminals had nicer cars and houses than they did. So we passed these laws, and it turns out it doesn't only affect Colombian drug lords," said Grover Norquist, president of Americans for Tax Reform. "They assert that they're only going to go after the bad guys... but it trickles down to hit all sorts of people."

The U.S. Department of Justice's asset forfeiture fund was valued at over $1.8 billion in 2013, according to the Institute for Justice. State and local governments often don't publish information on their seized assets, but data from the joint federal-state Equitable Sharing program shows that states profited to the tune of over $658 million in 2013 alone - and because of the lack of data, that's far from the true number for assets seized by state and local authorities.

This isn't trivial. Civil asset forfeiture has become a moneymaking scheme for state and local agencies.

"Law enforcement agencies should be adequately funded," said John Malcolm, director of the Heritage Foundation's Center for Legal and Judicial studies. "But they should be funded through the general appropriations process, not through forfeiture."

This is one of the reforms panelists agreed would make a difference: redirecting forfeiture funding to general funds rather than being able to use them as a way to directly fund law enforcement agencies. In a Heritage Foundation publication, "How Civil Asset Forfeiture Turns Police Into Profiteers," they outline a few other needed reforms: raising the burden of proof for asset forfeiture, reaffirming the presumption of innocence, requiring reports on forfeiture assets for those that don't have them, eliminating the joint federal-state Equitable Sharing program, and others.

"This is an assault on property rights," Norquist said. "It unites folks on the right and left, and it's one of those issues in the next several years that we can get something done."