Bush Derangement Syndrome Was About A Culture War 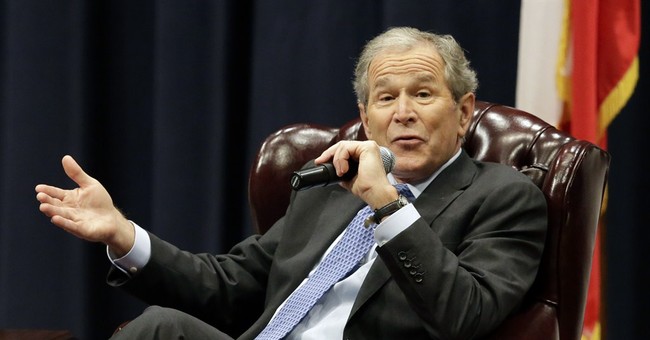 "Finally I can know what it's like to have a President smarter than me."

This was said by a very intelligent friend of mine after November 4, 2008, when Candidate Obama became President-Elect Obama. It was, for the college-educated cosmopolitan set, a triumph of rationality, of the reality-based community, over the flyover states, over the Red Americans, over the redneck cowboyism that ruled America from 2001 to 2008.

This is what came to mind when reading this piece by Vox's Ezra Klein on "Obama Derangement Syndrome" - and specifically, when Klein says that "Bush Derangement Syndrome" was really a policy disagreement, while the Obama version is a reactionary sentiment about how the President is not "one of us", be that a Christian, an American, or a country-loving patriot.

The notion that President Obama is, finally, a smart man in charge of the country is why Klein's argument is wrong. The derangement of progressives in the Bush era was decidedly not about his policies. Yes, they thought that the war in Iraq was wrong, that the tax cuts of EGTRRA & JGTRRA were unjust, and that his proposed reforms to Social Security would have been a disaster. But they also thought he was a reckless, dumb cowboy whose rich oil-money friends stole an election and whose entire presidency was illegitimate.

George W. Bush was a Texan with an accent and without a cosmopolitan affectation, who was prone to mispronouncing words, jumbling sentences, and being less-than-elite in his off-the-cuff remarks. Progressives still insist that President Bush was just a dummy more than one full presidential term after he left office. Slate's Jacob Weisberg made a regular habit of discussing Bush's perceived mental inadequacies. And lest we think this was indeed a reaction to the actual policies of the Bush Administration, attacks on his intellectual capabilities were a feature of the Gore campaign against Bush in 2000. And there was a famous internet hoax that purported to have academics "prove" that President Bush had the lowest IQ of any president ever.

This is before even touching on the circumstances by which George W. Bush became president. We may debate what "really" happened until the end of time, but because of the controversy over the 2000 election, some corners of the progressive movement refused to acknowledge the very legitimacy of the Bush presidency. Believe me: I was in the British punk rock scene at the time. The "Not My President" shirts - playing on both what kind of American culture that Bush represented and the idea that he stole the election and wasn't actually a legitimate president - were ubiquitous.

Progressives like Mark Crispin Miller of Harper's derided the press for refusing to acknowledge that Bush's crony friends "stole" not one, but two presidential elections elections and didn't belong in the White House.

Progressives hated President Bush's policies. But they also hated President Bush. He was a slow-talkin' Texan with mediocre grades in schools (that he only got into thanks to his rich family) who appealed to the lowest common denominator and spoke with a moral certitude that divides the world into black and white with no gray in between. Their hatred of what he represented as a cultural figure - flyover country and red state America - began before the polls opened in November 2000. Obama Derangement Syndrome is, yes, partly about who Obama is and what he represents, outside of his policies. But to whitewash progressives' Bush opposition during that presidency is to deny the facts of a very, very recent history.