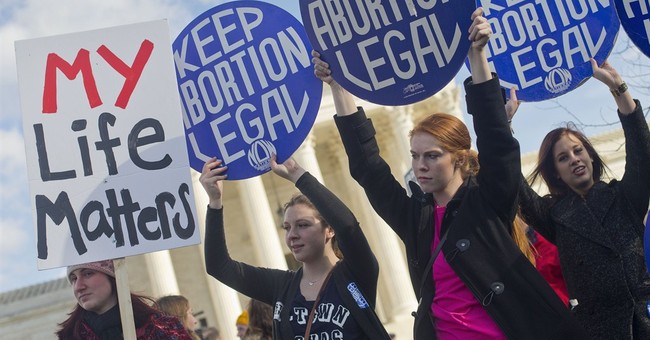 "I think all of us should have a respect for innocent life. With regard to the freedom of the individual for choice with regard to abortion, there's one individual who's not being considered at all. That's the one who is being aborted. And I've noticed that everybody that is for abortion has already been born. I think that, technically, I know this is a difficult and an emotional problem, and many people sincerely feel on both sides of this, but I do believe that maybe we could find the answer through medical evidence, if we would determine once and for all, is an unborn child a human being? I happen to believe it is."

This was then-candidate Ronald Reagan's response when asked, at a debate hosted by the League of Women Voters in Baltimore, Maryland, whether a president "should be guided by organized religion" on public policy issues such as abortion (http://www.presidency.ucsb.edu/ws/?pid=29407). As always, the Gipper managed to tackle a complicated, controversial issue with honesty and aplomb.

It's been 35 years since that debate, and President Reagan would undoubtedly be pleased to know that the medical evidence he alluded to is becoming more definitive each year with regard to the humanity of the unborn, and consequently, the grotesque cruelty of abortion (

According to a new report from the Government Accountability Office, the federal government has subsidized the world's largest abortion provider to the tune of $1.5 billion over the last three years (http://www.gao.gov/products/GAO-15-270R). Had a group of pro-life congresspersons not requested this data, the American people would likely still be ignorant of the extent to which their tax dollars are being used to fund a practice that many believe to be morally abhorrent. Congresswoman Diane Black said the following in response to the report:

"This report confirms what we suspected all along: hard-earned taxpayer dollars continue to be used to promote abortions. The GAO study found that Planned Parenthood Federation of America alone – the nation's largest abortion provider – spent about $1.5 billion in combined federal and state funding during this reporting period. This is shameful and we have a responsibility to stop it. As a nurse for more than 40 years, I know that abortion is not health care. In light of this report, Congress should act swiftly by passing the Title X Abortion Provider Prohibition Act, which would help cut off federal funding of organizations like these that promote the destruction of unborn life.

[And] let's not forget, this is information the Obama Administration never wanted us to have. The only reason this report exists is because pro-life Members of Congress specifically demanded it. Greater transparency and accountability is needed to expose how taxpayer dollars are being spent when it comes to abortion. By exposing the facts and shining a light on this egregious misuse of federal dollars, I believe we can successfully mobilize the support needed to defund the big abortion industry once and for all." (http://www.lifenews.com/2015/03/25/report-shows-americans-forced-to-send-1-5-billion-to-planned-parenthood-abortion-business/)

Planned Parenthood resorts to all manner of prevarications and deceptions to downplay its role as an abortion provider, but it is an undeniable fact that they are an ideologically-driven organization dedicated to advancing a radical pro-abortion agenda. When they decry evil Republicans' attempts to deny critical "family planning" services to low-income women, they are not talking about adoption services or birth control — they are talking about in-clinic abortions, the abortion pill, and efforts to spread their anti-family, anti-child agenda to the women of the world. When they scream that abortion only accounts for three percent of Planned Parenthood's total expenditures, they ignore the fact that a whopping 98% of the services they provide to pregnant women are for abortions. Bottom line? It is incontrovertible fact that — whatever other services they claim to provide for women — Planned Parenthood is the single largest abortion provider in America and the single largest abortion promoter in the world (http://thehill.com/blogs/congress-blog/politics/153699-exposing-the-planned-parenthood-business-model) Their goal is a world where individuals can enjoy sex without restraint or consequence, a view shared by President Obama, who once said the mistake of an unwanted pregnancy is a "punishment" that he wouldn't wish on his own daughters. (https://www.youtube.com/watch?v=jszkPtsFH-k)

Of course, you can't eliminate a pregnancy without eliminating the unborn child. Therefore, the abortion that Mr. Obama advocates and that Planned Parenthood provides actually results in the "punishment" of an innocent party. Ronald Reagan perceived the injustice of this fact 35 years ago, and the truth of his observation is as irrefutable today as it was then.

Until we repudiate the false notion that we can have sex without consequence and abortion without injury, organizations like Planned Parenthood will continue their government-assisted campaign to sexualize our children. The American people can quibble all they like about the government's rightful role in public life, but what is crystal clear is that no American should be made to subsidize the murder of unborn children. If ever there was a bright line, this is it.

This report should serve as a rallying cry for the millions upon millions of Americans who believe that life begins at conception and that society has a responsibility to protect its weakest and most vulnerable members, including the unborn. Given America's current dire financial straights, it is horrific that we are allocating such massive sums of money to such a macabre cause. Enough ink has been spilled fretting over America's bankrupt financial situation, but our moral situation is just as dire. In the end, it is our culture, not our economy, that truly has the power to destroy us.