Free Speech and The Book of Mormon 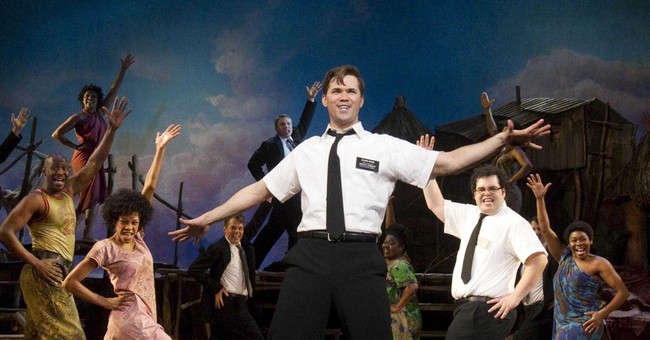 If you have any doubt as to whether Americans respect the First Amendment, all you have to do is take a cab to the Eugene O'Neil Theater at 230 W. 49th Street in New York City and watch Broadway's hottest musical, The Book of Mormon.

Written by Trey Parker and Matt Stone (of South Park fame), along with Robert Lopez (the musical talent behind the Broadway smash hit Avenue Q), the play is a raucous, raunchy musical satire of the Mormon religion. Set in Salt Lake City and the African country of Uganda, The Book of Mormon tracks the journey of church elders Kevin Price and Arnold Cunningham from the mother church's Missionary Training Center in Salt Lake City to a remote jungle village in Uganda. The objects of their evangelism are anything but sympathetic to their message, and faced with the trials and travails that accompany Africa and its "heathens," Price becomes disillusioned with the myth that is Mormonism and loses his faith. For straying off the path, he is tormented by the Mormon "Hell Dream." Elder Cunningham – a nerd with a penchant for lying – emerges as the unlikely hero when he converts the village to saving faith with a version of the religion that is even more fantastical than that recounted in their holy book.

The play is not for the faint of heart. The performance is irreverent, sacrilegious, offensive, and filled with scatological humor. Nothing is sacred, nothing is off limits. Mormons are Morons. Joseph Smith is a joke. Brigham Young and the angel Moroni are buffoons. Jesus is portrayed as worse than an idiot. Christians, Jews, and even gays, are subjects of ridicule.

The show has won nine Tony awards, but who's counting? Vogue says, "It's the funniest musical of all time." The New York Times calls it, "The best musical of this century." (It's early, after all.) The audience on Saturday night loved it. They clapped and cheered and smiled as they left the theater with scarcely a care in the world.

Now suppose – just suppose – that instead of Mormonism, the play made a mockery of the Muslim God Allah, that Mohammed was mocked and ridiculed and Muslims were portrayed as mindless bigots. What do you think the reaction would be in the Big Apple? Would the play open on Broadway? Would it be welcome in any venue in the City that Never Sleeps? Would the audience be looking over their shoulder as they left the theater? Would the Old Gray Lady, a.k.a The New York Times and Vogue be offering kudos?

If such a play did open on Broadway, you can bet that the theater would be surrounded by a phalanx of police accompanied by bomb sniffing dogs. You'd have to go through a metal detector and maybe a pat-down to get in. And how long do you think it would be before a fatwah was issued against the authors and performers? The Charlie Hebdo affair would look like child's play by comparison.

You can bet the farm that Parker and Stone – famous as they are for being iconoclasts – won't write that script. Too many consequences. That story would be tasteless and insensitive. The politically correct class would be apoplectic. There would be an outcry over the defamation of The Religion of Peace. Unlike the Mormons, who are meek and mild and respectful of the First Amendment, there are too many Muslims who wouldn't take the offense lying down.

The First Amendment is a beautiful thing isn't it? It's the cornerstone of a free society. It gives us the right to speak as we please and worship as we choose – or not at all. But don't kid yourself. Not everyone values equally the right to all forms of worship and expression. So don't hold your breath waiting for the creators of South Park to parody the Koran. If someone should have the temerity to do so, however, they shouldn't expect critical acclaim from the folks at Vogue magazine and The New York Times.