Ken Blackwell
|
Posted: Jun 15, 2018 8:45 AM
Share   Tweet
The opinions expressed by columnists are their own and do not necessarily represent the views of Townhall.com. 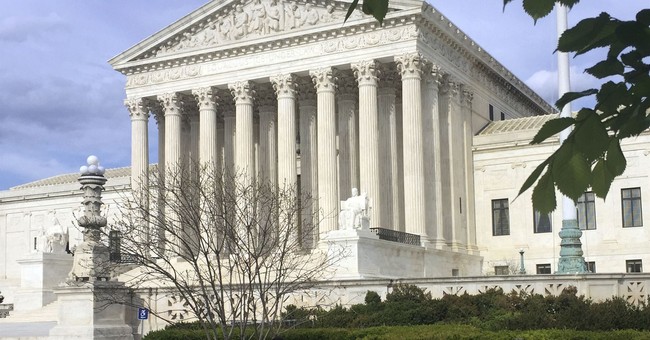 Democrats have long relied on inaccurate election rolls to aid their candidates. They want to count every vote, legal or not. So, after Ohio’s government cleaned up its registration lists it was hit with the usual claims of left-wing bias. Now the Supreme Court has ruled for the state.

Ohio Secretary of State Jon Husted said the “decision is a victory for election integrity” and Ohio’s system could “serve as a model for other states to use.” Playing an important supporting role was the Trump Justice Department, which shifted to defend Ohio—the Obama administration naturally attacked the state’s effort. The president deserves credit for appointing Justice Neil Gorsuch, who provided the deciding vote.

In Husted v. Randolph Institute the state had dropped a voter who failed to cast a ballot in several elections and respond to a notice requesting that he affirm his eligibility. There was no evidence of racism, prejudice, unfairness, or malice. Nevertheless, liberal groups sued, claiming that relying on the failure to vote violated federal law. Ohio prevailed in the District Court but lost at the appellate level.

Justice Samuel Alito authored the majority opinion, which focused on statutory interpretation. He explained that the relevant federal statute “simply forbids the use of nonvoting as the sole criterion for removing a registrant, and Ohio does not use it that way.” Which means that the state did not violate federal law.

The justice cited the dissent’s “alternative interpretation of the Failure-to-Vote clause, but that reading is inconsistent with both the text of the clause and the clarification of its meaning” in another section. Indeed, the dissenters believed that judges should overrule state policy based on their personal opinion of “reasonableness.” Political activists and activist judges alike aren’t interested in understanding what the law is. They want to declare what the law should be.

Justice Sonia Sotomayor complained that the majority ignored “the history of voter suppression.” Obviously, no serious person wants to repeat that experience. But as Justice Alito responded, she “has not pointed to any evidence in the record that Ohio instituted or has carried out its program with discriminatory intent.” He argued that she has a policy disagreement with Washington, not a legal disagreement with Ohio.

Although Justice Clarence Thomas joined the majority to uphold the state’s action, he authored a concurring opinion which addressed important constitutional issues. He noted that “constitutional text and history” gave states exclusive authority to determine voter qualifications. Thus, the arguments advanced for overturning Ohio’s law “would seriously interfere with the States’ constitutional authority to set and enforce voter qualifications.” Congress is authorized to set rules governing when, where, and how people vote, not who can vote.

This argument was made in greater detail by the amicus brief filed by the American Civil Rights Union. ACRU explained that if Congress had barred states from removing inactive voters from the rolls, then federal law would intrude “on the important federalist balance in the Constitution.” The latter limits Washington’s role, allowing only regulation concerning “Times, Places, and Manner” of federal contests. The purpose is simple: to preclude what we cannot imagine today, states refusing to hold elections for federal legislators.

ACRU’s brief also reminded us why states need to actively maintain accurate election rolls. For instance, Pew Charitable Trusts figured that 24 million registrations nationwide are inaccurate. The Public Interest Legal Foundation discovered that 141 counties in 21 states had more registered voters than eligible residents. In Virginia thousands of ineligible voters were found to have cast ballots before being removed from the rolls. Just as it is important not to stop eligible citizens from voting, it is critical to prevent those who are ineligible from voting, whether as a result of error or fraud.

Democracy will not survive, let alone thrive, without vigilant care. Every legal vote must count and not be diluted by illegal ballots. Ohio officials fulfilled their duty by pruning the state’s election roll. The Supreme Court properly sustained them doing their job.