Voices from the Grave Cry out for Justice in Iran

Ken Blackwell
|
Posted: Dec 30, 2017 8:25 AM
Share   Tweet
The opinions expressed by columnists are their own and do not necessarily represent the views of Townhall.com. 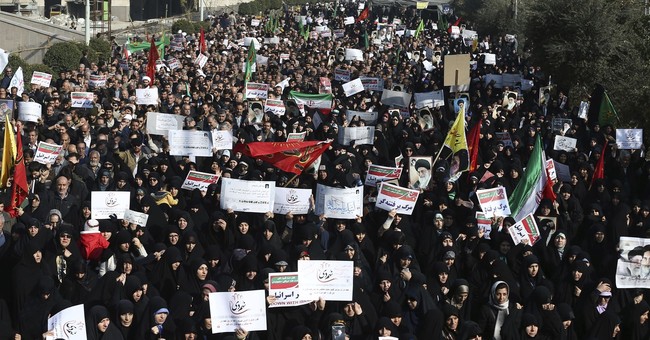 On Thursday, thousands of Iranians protested against the ruling regime in Iran’s second-largest city, Mashhad. Chants of “death to dictator” and “death to Rouhani” were brave and resounding.

These protests showed once again that the ruling clerics clearly cannot respond to the people’s legitimate economic demands. Inflation, unemployment and poverty are running rampant. Corruption has permeated every aspect of economic and government life, leading to vast disenchantment against the velayat-e faqih (absolute clerical rule) among the population.

That disenchantment has been brewing for 38 years, since the “Islamic” state’s founding in 1979. However, the regime has used suppression, imprisonment, torture, and mass murder to silence the population. Tehran is trying its utmost to conceal this war at home between the people and the regime.

There is a passage in scripture that says, “Those who would do evil love the darkness.” We know that violent, evil regimes love the darkness.  It is incumbent upon us as individuals, nation states, and communities of nation states to put pressure on the regime to give access to the community so that we might shine light on the evils that have been committed.

As a consequence of such constant pressure, we give hope to the disenchanted population of Iran waiting to rise up. This pressure will help them punch holes in the darkness, as was the case in Mashhad. During those protests, Iranians showed that they are not a participant of the regime’s wars in the region, including in Syria. They chanted, “Let go of Syria and think about us;” and “Not to Gaza, not to Lebanon, I dedicate my life to Iran.”

Their chants of “death to the dictator” were important because it falls in a political climate punctuated by growing demands for justice for the regime’s massacre of thousands of dissidents in 1988. I have had the privilege of being involved in this international movements, demanding access, transparency, accountability, justice, and closure for the families of the victims of this mass murder in Iran.

In the 1990s, I had the privilege of working with Dr. Clyde Snow, one of the world’s foremost experts in forensic anthropology. Dr. Snow played an instrumental role in bringing justice to Argentina by uncovering the mass graves left behind by the country’s dirty war.

After the fall of the military government in Argentina, forensic scientists were invited to the country in order to investigate the atrocities. One of these scientists was Clyde Snow, who recruited a group of Argentine students to aid in his investigation. Their work included the methodical excavations of graves. They carefully organized and recorded all of the remains and evidence found.

Dr. Snow’s findings brought light to the families, and this was important for people who previously had no knowledge of their relatives’ fate.  His testimony and evidence presented in court also led to the conviction of several members of the junta dictatorship.

Today in Argentina, that group of forensic anthropologists is still in existence and as a result of Dr. Snow’s inquiry, continues to use his methods to investigate human rights abuses.

When it comes to the 1988 massacre, the U.S. government needs to advocate for the access of this sort of team to Iran. A concerted and comprehensive international pressure on a regime already at war with its people can help bring closure to the families of the victims of the summer of blood in 1988.

I have requested from the U.S. delegation at the United Nations and Ambassador Nikki Haley for their constant demand for access for the sort of work that Dr. Snow did to be repeated in Iran.

The regime resists these calls because it has something to hide. But the U.S. must push and advocate for justice for the 1988 massacre.

The U.S. delegation at the U.N. should continue to be a leading voice not only on the threats of international terrorism perpetuated by the regime but also to bring justice to those human rights advocates in Iran. The people of Iran have the experience of a brutal history where young girls were killed simply for handing out leaflets.

The 1988 massacre is a constant reminder of what the people who are presently under the hammer of the regime are experiencing. All indications are that protests will increase in Iran in 2018. The Iranian people are looking to the international community for a significantly elevated moral support.

Ken Blackwell was the former U.S. Ambassador to the United Nations Human Rights Commission. He is an advisor to the Jewish Institute for Nation Security Affairs.

Share this on Facebook
Tweet
What Caused AG Barr to Ask His FBI Detail to Make ‘A Quick U-Turn’ While Driving Through Virginia
Matt Vespa
WATCH: Biden Doubles Down on His Racist Comments About All Blacks Being the Same
Bronson Stocking
The Face Mask Tiger Woods Wore to the PGA Championship Will Definitely Trigger Liberals
Bronson Stocking