Ken Blackwell
|
Posted: Jul 26, 2016 12:01 AM
Share   Tweet
The opinions expressed by columnists are their own and do not necessarily represent the views of Townhall.com. 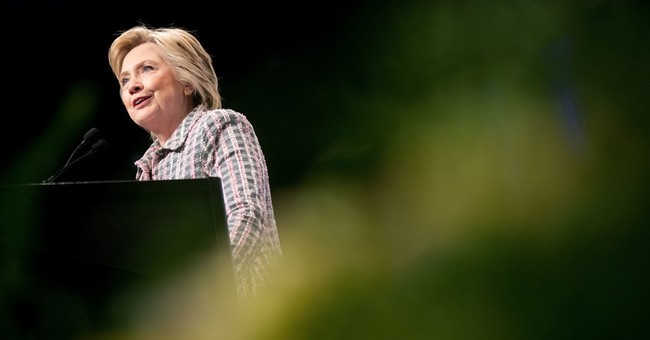 *This column was coauthored by Ken Klukowski of Breitbart News.

Although Hillary Clinton and the beleaguered Democratic National Committee (DNC) are attempting to paint Donald Trump and Mike Pence as out of step with the country on abortion, new polling shows that a majority of Americans actually agree with Trump-Pence on this hot-button issue, while Clinton is pushing an abortion agenda opposed by almost 80 percent of Americans.

A new Marist poll of over 1,000 American adults (sampling all adults yields more liberal results than registered voters, and significantly more liberal than likely voters) finds that while 51 percent of Americans use the term “pro-choice” to describe their abortion views, that term is misleading, because 78 percent of Americans believe in substantial restrictions to abortion.

For example, Clinton and the DNC condemn Pence’s signing an Indiana law discontinuing taxpayer dollars to Planned Parenthood in the Hoosier State. But the poll shows that 62 percent of all Americans—including 44 percent of Democrats—support banning taxpayer dollars from being spent on abortion. (This law was one of the reasons Pence was praised last week in Cleveland by pro-life leaders.)

Earlier this year, Breitbart News reported and thoroughly examined the Supreme Court’s split decision in Whole Woman’s Health v. Hellerstedt, striking down a Texas law requiring abortion clinics to meet the same sanitation and equipment standards as a surgical center, and for abortion doctors to be able to treat in the woman in a nearby hospital in the event of complications.

Regarding religious liberty, 56 percent of adults believe that a person who has pro-life beliefs should never be required to participate in an abortion.

Summarizing the poll’s findings, Marist poll director Barbara Carvalho said, “The majority of Americans in favor of abortion restrictions has been consistently around 8 in 10 for the better part of a decade.” Explaining the use of the “pro-choice” label, she added, “Though self-identification as pro-life or pro-choice can vary substantially from year to year, the support for restrictions is quite stable.”

The poll was commissioned by the Knights of Columbus. It canvassed 1,009 Americans ages 18 and over, was conducted July 5-12, and has a margin of error of 3.1 percent.

Clinton and her running mate—Tim Kaine—attack Pence in particular for having said repeatedly that he wants to see Roe v. Wade overruled. But what exactly does that mean? It would not make abortion illegal, or even restrict it.

Instead, it would send the issue back to the states. In Roe, a divided Supreme Court invented out of whole cloth a constitutional right to abortion, despite the fact that the Constitution never mentions that word. So overruling Roe would take this issue out of the hands of unelected federal judges, and return it to where it had been for almost two centuries—to elected state legislators to make state and local laws that reflect the beliefs of their voters on this issue.

Ultimately, this issue comes back to the Supreme Court vacancy created by the death of the iconic Justice Antonin Scalia. Clinton will create a Supreme Court that will radically expand abortion rights well beyond Roe, to include a right to taxpayer funded abortion.

Clinton’s position was rejected by even a pro-abortion majority of the Supreme Court in 1980. The justices held in Harris v. McRae that a federal law denying Medicaid funding for abortions is constitutional, because the right to have an abortion does not include the right to force other people to pay for it through their tax dollars.

The Democratic nominee has also criticized recent Supreme Court decisions holding that Christian-owned businesses cannot be compelled by the federal government to provide abortion-related services to their employees. Those decisions were Burwell v. Hobby Lobby Stores, and also the Little Sisters of the Poor case, Zubik v. Burwell.

Clinton believes that Catholic nuns should be required to fund birth control and abortions, while Trump and Pence disagree. Trump acknowledges that there is a virtual War on Christians going on in parts of the country today, and Pence talks openly on the campaign trail about his evangelical Christian faith and the need to protect religious liberty.

With Scalia’s death and two of the remaining eight justices in their 80s by Election Day, the likelihood that the next president will appoint at least three justices to the Supreme Court guarantees that abortion will remain a major issue in 2016 election.