The March for Life and Fighting for the Unborn

Ken Blackwell
|
Posted: Jan 21, 2016 10:06 AM
Share   Tweet
The opinions expressed by columnists are their own and do not necessarily represent the views of Townhall.com. 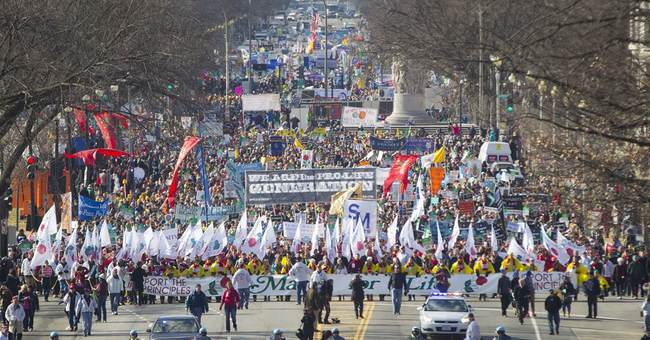 It has been more than four decades since the Supreme Court ruled in Roe v. Wade that unborn were of no account. Precious life created in the image of God was treated as but an inconvenience to be removed “on demand.” A Constitution drafted by those who believed in life and liberty became a license to kill the most helpless and defenseless among us. The ruling greatly accelerated what Pope John Paul II termed the “culture of death.”

Although Roe’s most devastating impact remains the thousands upon thousands of babies never allowed to take their first breath, the high court decision also spurred a generation of liberal judicial activism which has malformed America’s Constitution and system of government. The problem is not energetic judges, but jurists who rewrite rather than enforce the Constitution. Today the Court acts like a nine-member continuing constitutional convention.

An unwanted pregnancy is a significant burden. The reasons for one are many and the political process is not the place to judge the reasons why. But abortion is not the answer. The consequences are rarely benign for women who abort their babies. Regrets are common, physical problems are real, and psychological harm can be great. The body seems to naturally rebel against efforts to destroy what it has created.

Yet a worse fate is reserved for the child, just months away from independent existence. No one has an obligation to conceive. And contraceptives are widely available. Indeed, the federal government now insists that they must be “free,” paid for by the rest of us. So there’s little reason for an unwanted pregnancy.

However, having created life, none of us, not even the mother, has a right to end it. There’s no need to argue theology about souls and biology about the beginning of life. We all know that starting with a fertilized egg yields a crying newborn nine months later. Once on the continuum of life there’s no excuse for ending it, except in truly extraordinary circumstances, such as a threat to the life of the mother. It’s fine to talk about choice, but except in the thankfully rare case of rape the choice was to have sex. The issue then is taking responsibility.

There’s something more. Although sometimes promoted in the name of liberation, abortion long has been directed against racial minorities. Indeed, years ago a surprising number of “good ole’ boy” Southern legislators favored legal abortion because they imagined it would be used most by those they saw as undesirables, especially African-Americans.

Liberals today inadvertently follow in the footsteps of the apostles of Jim Crow. For instance, Hillary Clinton insisted that “we need to protect access to safe and legal abortion, not just in principle, but in practice.” She inveighed against the so-called Hyde Amendment, which bars federal funding for abortion, including through Medicaid. This makes “it harder for low income women to exercise their full rights” to kill their babies, complained Clinton.

Of course, even overturning Roe would not end the abortion debate. That would merely allow states to restrict abortion. A forthright discussion then would ensue over the importance of protecting life, rather than shadow boxing over, say, the safety standards of abortion clinics.

Many states, such as California and New York, are unlikely to restrict abortion. Even there, however, it would be useful to have a serious debate over the issue. Those dedicated to taking the life of the unborn should not be able to hide behind the word “choice.” They should be forced to face the uncomfortable fact that they are making possible the taking of life, especially that of the poor and minorities, who liberals always pretend to be protecting.

The March for Life is a sad occasion, since it marks a low point in American constitutional history. But it also is a moment of hope and triumph, since it shows that people across the country will continue to fight for what’s right, irrespective of the odds.