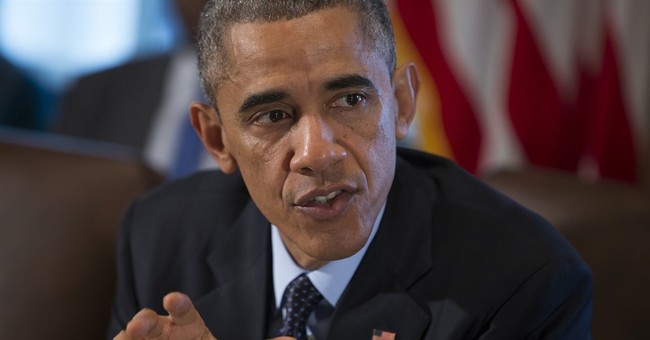 “Remember,” said Ronald Reagan, “we have opponents; we don’t have enemies.”

That’s why President Reagan was so successful in gaining the respect and affection of the American people. Even people who did not like his policies liked him.

President Obama’s troubles in office stem in no small part from is willingness to treat American opponents as enemies. (He treats America’s true enemies as friends, but that’s another matter.)

The readout from Election Day is that Mr. Obama’s Democrats suffered “a massacre.”

That word from Britain’s prestigious Economist is being used even as Christians and Muslims in Syria and Iraq are suffering genuine massacres at the hands of ISIS.

Still, we can soberly describe the Mid-term Elections as a rout, as a massive rejection of President Obama’s policies, if not the president himself. He had told voters that his policies—“every one of them”—would be on the ballot this November. He also told voters that the endangered Democratic incumbents “vote with me.” As a result of Tuesday’s massive rejection, those folks will vote with him no longer.

The popular analysis of all this is not that President Obama is “irrelevant.” Alaska’s Mark Begich tried to save his seat by that absurd description of the Chief Executive. It didn’t work. But there is a growing consensus—especially among conservatives-- that Mr. Obama is “incompetent.”

But what if President Obama is, instead, intentional? He has said it again and again. He told interviewers he would rather be “a consequential one termer” than an inconsequential two-term president. He was echoing his previous remarks during the 2008 campaign when he paid a left-handed compliment to Ronald Reagan. He said then that the 40th president had “changed the trajectory of the country” in ways that Richard Nixon and Bill Clinton had not.

We should take Barack Obama at his word. He said he wanted to “fundamentally transform this nation.” He pledged in his 2009 Inaugural Address “to remake America.”

Let’s remember the bitter joke of Communist playwright Berthold Brecht. When it appeared clear the workers of East Germany were rejecting their Marxist proletarian paradise, Brecht said the party bosses would simply have to “elect a new people.”

This is what, in all seriousness, Barack Obama is doing. He is planning to go ahead with an Executive Order to make millions of new Americans of the illegal aliens currently residing here. He will probably stiff-arm Congress and act in defiance of the Constitution and the laws. He will probably nominate a new Attorney General—and press a lame-duck Senate to ram through the confirmation vote.

Socialism is inherently undemocratic. Its adherents believe they are “on the right side of history” and thus they feel entitled, empowered even, to bend and break the rules in order to achieve an ever-greater central control over Americans’ lives.

Now that the celebratory champagne has lost its fizz, we need to soberly assess where we stand with this administration. President Obama can veto any repeal of Obamacare. He still maintains control over college student loans. Common Core (fairly dubbed “Obamacore”) is still advancing despite fierce grassroots opposition. He is still converting a severely weakened military into a laboratory for radical social experimentation. He is packing the federal judiciary with radicals. He will rely on these black-robed rogue judges to force the changes he wants but cannot achieve through legislation. He is staffing the federal bureaucracy with his devotees—and creating new “Czars” not subject to Senate confirmation. He will use Executive Orders to limit or even frustrate the intent of Congress on major issues.

In foreign policy, he is presiding over the recessional of American power and influence in the world. In order to achieve socialism at home, America must only“lead from behind” abroad. He has said we are only “exceptional” in the same sense that Britain, Greece and every other nation regards itself as exceptional. With this exception: He has publicly apologized to the world for America’s perceived transgressions.

It is good that the voters came out in their millions to try to pull the country back from the brink. But President Barack Obama is a most serious adversary. He knows what he wants and he knows how to get it.

There’s another reason to reject the “incompetence” label. President Obama is telling Black Americans that he is the victim of racism, that opposition to his policies is the result of opposition to his historic status. The more conservatives cry “incompetent,” the more we feed into that liberal narrative. And the stronger support he gets in the Black community, the better able he will be to pursue policies we sincerely believe are injurious to the Black community itself as well as to the majority of all Americans.

White BLM Counter-Protester Gets Thoroughly Educated by a Black Woman Who Isn’t Having It
Redstate
<span class='red'>Breaking: It’s Harris</span>
Hotair