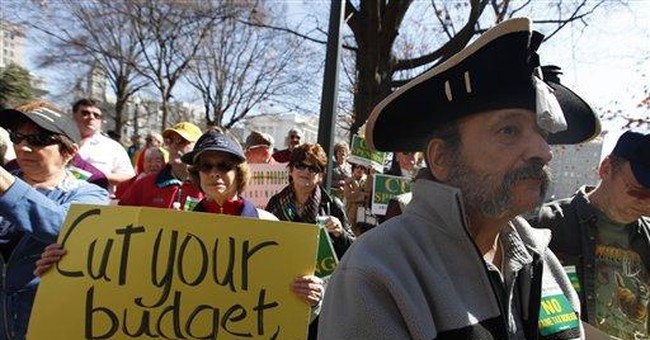 Ken Klukoswki contributed to this report.

There appears to be a concerted effort among the political Left and many mainstream media people to demonize and marginalize the expanding citizen-based movement known as the tea party movement. This effort flows from both a fear of what these tea parties represent and a contempt for everyday Americans. But those ordinary citizens are poised to be the ones laughing when it’s all over, when democracy takes its course.

There seems to be a consensus now among the liberal elite when it comes to the tea parties. Senior administration officials deride them, as do liberal congressional Democrats. These elitists characterize the tea partiers as extremists, some drawing analogies between these ordinary citizens and right-wing militias, fanatics, and religious zealots. Some members of Congress are even saying that these tea party people are racist, which is pretty much the worst label that can be slapped on you in modern politics.

And many leftist talking heads in the media parrot this message, with their own biting editorial, adding that some in the tea party crowd are dangerous. Some talking heads, including some Hollywood actors and others who don’t seem to have any credentials as policy analysts but are nonetheless given air time, are really playing up the racism angle, and even suggest that some tea party attendees may be domestic terrorists.

Agents of big government and their boosters in the mainstream media seem determined to throw cold water on this growing grassroots movement that is a reaction to the Obama administration’s power grab of the growth and expansion of this country’s central government.

There’s a great deal of diversity among tea party people. Some just want lower taxes, and some also want less regulation. Still others are pro-life voters or Christian conservatives that also want fiscal responsibility. Many others push for conservative judges, while still others hold up signs calling for a restoration of American sovereignty, or protecting America’s borders, or defeating cap and trade or card check.

But they all have two things in common: They all want smaller government, and oppose the trampling of the Constitution embodied in these efforts to radically expand the size and scope of government. And as part of that desire, they want this utterly-ludicrous spending binge to end before it bankrupts all of us.

There’s nothing extremist about that agenda, because common sense is never extreme.

Are there some people attending tea party rallies who are intemperate in their remarks? Sure. Whenever you get tens of thousands of regular folks together, you’ll always get a few who makes comments that they should reconsider. Even then, nothing we’ve seen is worse than the truly outrageous statements that we’ve heard from the Left in recent years about President Bush or Republicans.

Having been engaged in many gatherings of the tea party crowd, it’s offensive that many in the mainstream media are engaging in a systematic effort to marginalize American citizens who are simply trying to take a stand for individual liberty—a stand in opposition to big-government expansion. Also one of us speaking as an African-American (Blackwell), it’s especially insulting to suggest that these people’s opposition to President Obama is driven by racism.

America’s history of grassroots activism goes back to the founding of our republic. Government of the people, by the people, and for the people includes as a necessary element those same average, ordinary people being able to gather and speak out. This freedom to assemble was considered so essential to a free nation that our Founders put it in the First Amendment, right alongside the freedom of speech and freedom of religion.

Ironically, these rights are set side-by-side with the freedom of the press, as well. The leftists in the media would do well to remember that their liberty to be a free press comes from the same constitutional amendment as the tea party crowd’s liberty to gather together.

And our elected leaders would do well to remember that the First Amendment exists to protect average people from the government, not the other way around.

Blackwell and Klukowski are the authors of the forthcoming book, The Blueprint: Obama’s Plan to Subvert the Constitution and Build an Imperial Presidency, on sale April 27.