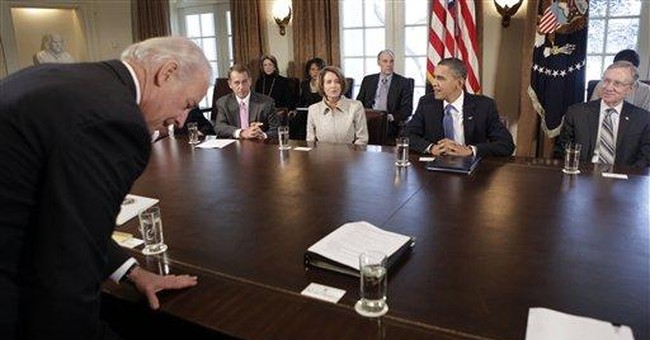 Trending
Editor's note: This piece was co-authored by Ken Klukowski.

The Senate is about to act on the nomination of militant leftist Dawn Johnsen to be the chief of the U.S. government’s elite legal team. But that post is a stepping-stone for top judicial offices, including the Supreme Court itself. That’s likely Barack Obama’s plans for Johnsen, and it’s why she must be stopped now.

Ultra-liberal activist Dawn Johnsen, currently a professor at Indiana University School of Law, is President Obama’s nominee to be assistant attorney general in charge of the Justice Department Office of Legal Counsel (OLC). As the OLC chief, Johnsen would shape the legal positions of the Obama administration on every issue. OLC is the elite legal team for the federal government, giving legal advice on every important issue to the attorney general, other department heads in the government, and to the president himself. That’s why the head of OLC is called “the attorney general’s lawyer.”

The problem is that Johnsen is a radical. As the former legal director for the extremist abortion-rights group NARAL, Johnsen argued in a brief to the U.S. Supreme Court that denying a pregnant woman the right to demand unrestricted abortion is to subject her to slavery, which was outlawed by the Thirteenth Amendment after the Civil War.

She also argues that wiretapping a known terrorist is illegal without first obtaining a warrant, that military detention of terrorists captured on foreign battlefields is illegal, and that being commander-in-chief gives the president no constitutional authority to use wartime measures that would not be allowed against U.S. citizens during peacetime.

And finally, she believes in “economic justice,” which is the euphemistic term of the Radical Left, referring to the concept that government should confiscate and redistribute personal wealth to create a more “just” society. In one word, it’s socialism.

Even worse, Johnsen passionately argues that liberals should, “focus on the courts as the vehicles for desired change.” In other words, her legal advice would not only be advice; she intends to craft legal strategies to cram ultra-left outcomes down America’s throat through judicial activist court decisions.

The normal rule is that the Senate should give tremendous deference to any president when it comes to whom that president wants to assist him in the executive branch. Such appointees serve only at the pleasure of the president, they are there solely to carry out the president’s directions in steering the government, and they go out the door the instant the president does, if not before.

But even tremendous deference is not unlimited deference. The Senate defers, but they do not give a blank slate. Otherwise there would be no Senate confirmation process; the Constitution would instead just empower the president to appoint anyone he wants to all executive-branch departments and offices.

This is one of those extraordinary circumstances where the Senate should reject a nominee. Comparing being pro-life to supporting slavery is a grossly offensive statement, especially to African-Americans, and her other extremist views are so radical that she is a textbook example of someone who must be denied confirmation.

But former Chief Justice William Rehnquist is the best example. He was the head of OLC in the early 1970s, and then was nominated directly to the Supreme Court. The assistant attorney general at OLC is prestigious enough that a person can go straight from that position to our highest court.

That may be Obama’s plan for Johnsen. She’s a dream judge for the Radical Left. Although she likely wouldn’t go straight to the High Court, she looks like someone being groomed for our nation’s second-highest court, the D.C. Circuit, from which she would be on the top of the short-list for a Supreme Court vacancy.

And even if she never makes it to the Supreme Court, she could do terrible damage to national security and other issues as a judge on the D.C. Circuit. Several former OLC chiefs serve on our nation’s appellate circuit courts.

To the extent that she can be exposed now, she may become too much of a liability for a lifetime judicial appointment. And if she can be stopped now, then she’ll likely never wear a black robe.

Senator Orrin Hatch, who as a principled statesman is consistently deferential on executive-branch presidential nominations, is one of the senators leading the charge against Johnsen. Hatch, the former chairman of the Senate Judiciary Committee, knows all too well how OLC is a springboard to our top federal courts, and this is doubtless driving part of his opposition to Johnsen.

Finally, it’s poetic justice to note that this is also Johnsen reaping what she has sown. Johnsen has called on the Senate to refuse confirmation to any judicial nominee who believes in the slightest restriction to abortion, or even to any person who belongs to the legal debating group called The Federalist Society, a mainstream conservative/libertarian legal studies organization. Having taken such a rabid and militant stand against others being confirmed, she can hardly cry foul that the Senate is now applying an even less-severe standard in opposing her.

Dawn Johnsen is a radical who has no business heading OLC. The Senate should stop her from being confirmed to this vitally-important office.

Ken Klukowski is a fellow and senior legal analyst with the American Civil Rights Union.