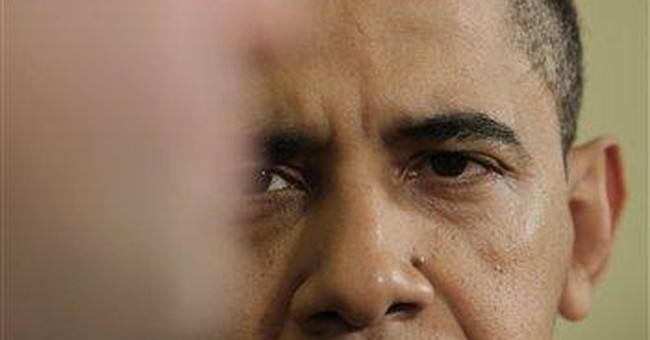 There's a vicious rumor being reported in Washington. It says President Obama was holding off his announcement of new troop movements into Afghanistan not until after Hamid Karzai's election runoff that had been scheduled for November 8, but until after today's closely-watched off-year elections. The basis for that rumor is the idea that Obama would not want to depress his own base, discourage "peace" voters from voting in Virginia, New Jersey, and New York's 23rd congressional district.

I reject that rumor. I do not believe this President, or any President, would so callously disregard the lives of the soldiers, sailors, and airmen whom he has sent into harm's way. My point is something else entirely. Such rumors would not have a chance to circulate, to get "legs" if you will, if President Obama were not so publicly agonizing over his decision to send in more troops.

Many of my fellow conservatives are rhetorically flailing President Obama for not immediately and uncritically endorsing Gen. Stanley McChrystal's call for 40,000 or even 60,000 more troops. I don't share that criticism. Yes, it's true Gen. McChrystal was President Obama's own choice to command. But Gen. McClellan was Lincoln's own choice. And Gen. MacArthur was Truman's own choice. The President should never act as a mere rubber stamp for his senior military advisers, no matter how able and devoted they are.

My complaint with President Obama is his long and all-too-obvious indecision. We have just passed our bloodiest month in Afghanistan. The President went out to Dover Air Force Base to meet the returning caskets of some of our brave fallen warriors. This is entirely right and proper. But he owes those honored dead more than his respect and his sympathy. He owes them firm, decisive leadership.

Impatient columnists have argued that Obama should have ordered a "surge" in Afghanistan back in August, when Gen. McChrystal first recommended it. Perhaps. Or, he might have used some of his European "face time" with the leaders of our NATO allies to gain stronger commitments from them to shoulder a larger share of the burden of defending freedom from the terrorists. After all, many of the British and European allies are in as great danger as we are from jihadists.

The NATO alliance. one of Harry Truman's inspired achievements, is based on collective security, on the idea that an attack on one of its member states is an attack on all. Collective security requires the commitment of all allies to support the counter measures required. NATO should not be allowed to degenerate under this President to the point where the old saw comes true--NATO: No action, talk only. We've been attacked by murderous Muslims, but so have London and Madrid.

Rasmussen made the important point that we can stand up an Afghan fighter for 1/50 of the cost of equipping a U.S. or coalition soldier. May be. But will the Afghan fight?

Rasmussen told FOX News: "The situation is not satisfactory. In particular the security situation is not satisfactory. But actually I visited the southern Helmand province recently. I also visited the very same province one year ago, and I saw clear progress as far as security is concerned. Not least thanks to [the] increased number of American troops. So the number of troops matters."

Do they all have to be U.S. troops? Maybe not. But whoever fights in Afghanistan needs to have the attention and the full backing of our President. Couldn't President Obama have spared some of the time he put in to Chicago's Olympic bid even to stage a walk-on in Afghanistan?

After all, this is the war Senator Obama himself called "a war of necessity." This is the war he charged that George W. Bush had failed to win while pursuing a "war of choice" against Saddam Hussein.

This delay, this months-long dithering is dangerous. The Soviets watched very carefully when Ronald Reagan fired the air traffic controllers for striking illegally. They were impressed by his swift and sure decisiveness. With Reagan, the KGB reported to the Kremlin party bosses, "words are deeds." Obama's Hamlet act is growing stale.

President Kennedy knew how important the presidency is. He eloquently said: "I do not shrink from this responsibility. I welcome it."

Can it be that Obama's very public shrinking from the responsibility of decision is what is causing his own shrinking in the American public's support? We don't need a President who, in the words of Newsweek editor Evan Thomas "hovers above us all, sort of a god." What we need is a President who understands what Harry Truman meant when he posted a sign on his Oval Office desk: "The buck stops here."