Expelling Kids in D.C., Enrolling Them in Gaza 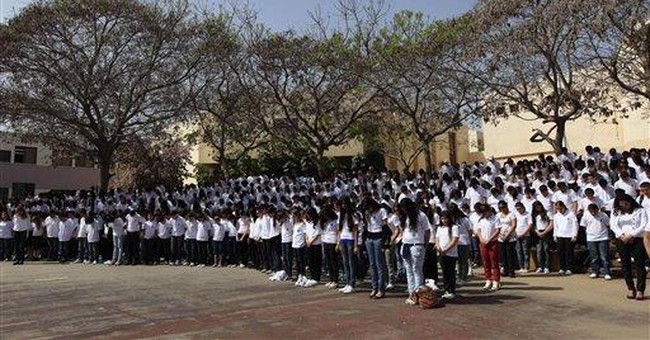 It’s not often these days that I get a chance to commend The Washington Post editorial page. But I cannot help cheering for their excellent support for D.C. Opportunity Scholarships. I fully endorse their criticism of the Obama administration and liberals in Congress. These Opportunity Scholarships are vouchers worth up to $7,500 that have allowed parents of poor kids to send their children to schools of their choice. The vouchers are wildly popular with parents. Four times as many parents applied to receive them as could be funded under the old, rather limited appropriation. President Obama’s own education department has issued studies showing that these scholarship students are up to one half year ahead of their public school peers.

Now, even this very limited program is slated for destruction. President Obama’s chosen Secretary of Education, Arne Duncan, supports the vouchers. So do Mayor Adrian Fenty and Schools Chancellor Michelle Rhee. All are Democrats. These public officials, regrettably, have been rather muted in their criticism of the Obama-congressional decision to give the program the axe. Former Mayor Anthony Williams and former D.C. City Councilman Kevin Chavous—to their credit—continue to speak up for children.

Our friends at the Heritage Foundation analyzed the vote. They found that if only those Senate voucher opponents who send their own children to private schools had voted for the scholarships, they would have passed. The Post editors rightly point out that twice as many Members of Congress (20 percent) as the general population attended private schools growing up.

The Post would like to know which senators voted to cut off parental choice for poor children in Washington—while sending their own children to expensive private schools. So would I. This is a worthy project for investigative journalists. We do know that President and Mrs. Obama are sending their own beloved daughters to Sidwell Friends School—and that two scholarship kids who go to that school are in danger of being dropped.

As a young child, my family lived in the housing projects of Cincinnati, I was blessed by the educational activities of area churches in my neighborhood. The education I received there helped me immeasurably in developing the character and solid foundation on which my career—indeed, my very life—has been based. Later, I was privileged to serve as Chairman of the Catholic Inner School Fund. That’s why I’m a passionate supporter of parental choice in education.

What The Washington Post does not say, but what FOX News points out is that this cruel decision by the Obama administration to cut off poor children in Washington, D.C. comes at the very time this administration is giving $900 million to Gaza. There, in what some call the Palestinian territories, parents fired guns in the air to celebrate when America was attacked on 9/11. There, parents gave children candy to celebrate the 3,000 American deaths that occurred on that terrible day. There, parents attend school programs where little children dance and sing—while dressed as suicide bombers! This is not your mother’s PTA!

Secretary Hillary Clinton has tried to reassure us that our $900 million will go to “rebuild Gaza” and for “humanitarian purposes.” We have seen how Hamas—the terrorist group that controls Gaza—uses “hospitals” to store weapons and “ambulances” to re-supply rocket launch teams.

It’s hard to see how Members of Congress and this administration can justify cutting off American kids—while helping those who in Gaza who hate America.

I would like to see a listing of the senators who voted down D.C. Opportunity Scholarships while voting to send our money to the Gaza Strip. That list, at least, would provide us all an education.