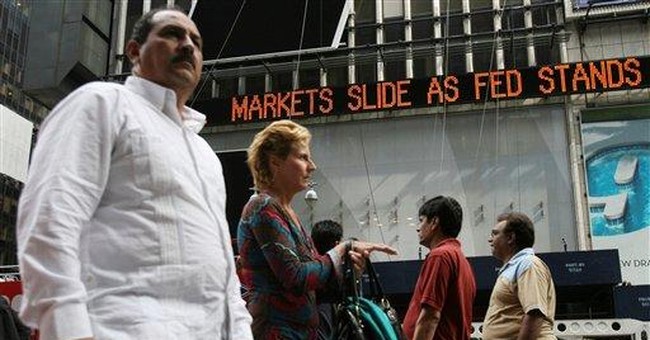 The Dow dropped 504 points as major American corporations nosedived, some of which are being saved with your tax money. It is way past the time to give corporate executives additional incentives to avoid asking for a congressional bailout. Instead they must run their companies responsibly.

It started when Bear Stearns was bailed out by federal authorities a few weeks ago. What is unprecedented about this is the Federal Reserve, which formerly operated as a lender of last resort to banks, for the first time channeled cash to a financial investment firm, radically expanding its sphere of regulation.

In the wake of this, market-watchers speculated which firm would be bailed out next. On Monday the feds let Lehman Brothers, one of the nation’soldest investment houses, collapse. Another giant, Merrill Lynch, was acquired by Bank of America as Merrill’s value plummeted.

Then AIG, with initial assets of one trillion dollars, lost 60% of its value. Fearing the global financial tidal wave AIG’s failure would cause, the feds stepped in. The international insurance giant wasspared Lehman’s fate.

Those two institutions have no one to blame but themselves. Mortgage lenders were issuing mortgages to people with no income and noassets. That is simply insane. Who gives a loan to someone who cannot cover it and has no income with which to make payments? Someone who thinks that Congress will bail them out with your money if things gobad, that is who.

Some on the left criticize this as thefailure of the free market. They will demand increased government control of the economy, but they are wrong. Markets have both potential and risk. Business leaders get paid to exercise their judgment of the markets in order to maximize a company’s profits. Boards of directorsexercise their judgment to elect corporate officers who will best achieve this goal.

But that is not what is happening in somecorporations. A corporation should not pay one dollar more than necessary to keep corporate officers from quitting. Instead some are paying one dollar less than the amount that would send shareholders into an all-out revolt. Such corporations are operating to enrich their top employees at the expense of shareholders. That is backward - corporations exist to enrich shareholders.

This week's financial meltdown offers examples of this. The top officer at Lehman Brothers was Dick Fuld. His personal compensation over the past severalyears was nearly half a billion dollars before taxes. He was raking in these astounding paychecks while the company entrusted to him was atserious risk because of reckless investment decisions.

Perhaps someone could do such an amazing job that they are worth such pay, but the fact that his company is now bankrupt creates doubt that hiscompensation was merited by his performance.

With freedom comes responsibility. Those who would have self-government must, by definition, govern themselves. Self-government only works when peopleact responsibly and fulfill their obligations. When people abuse these freedoms to enrich themselves at the expense of others, then the public will demand the government to step in. That is how government grows,and how freedom is diminished.

The prospect of government intervention should be terrifying to corporate leaders. For too longmany of them viewed it as a safety net.

First, as many have suggested, if the feds become involved the corporate executives responsible for the failed company should only receive a governmentsalary. But more is needed.

So if federal regulators becomeinvolved, all supplemental, deferred, and other non-salary compensation should be immediately canceled. Beyond that, federal regulators should also have the option of terminating officers, forcing the corporateboard to find new leadership.

After all, if someone is running a company so poorly that it goes under, why should one get paid enormous sums for one's incompetence? If a company goes under, those responsible should not be rewarded. And after the recent federal bailouts, some corporate officers are likely considering seeking thesame bailout.

As my grandmother was fond of saying, if you reward bad behavior all you are going to get is more bad behavior.

Reckless and irresponsible individuals like those at the companies mentioned above give decent corporate managers a bad name. When financialmeltdowns occur, the public’s outrage drives government to take over part of the private sector. When the government does so, it replacesirresponsible executives with unaccountable bureaucrats.

That takes us out of the frying pan and into the fire. To prevent that outcome, corporate officers must be made accountable.