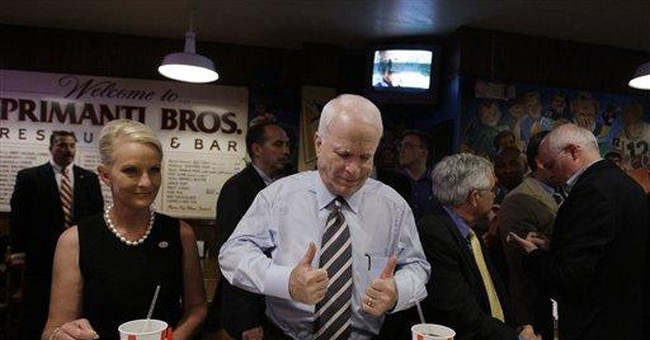 On July 16 Senator McCain will address the NAACP at its national convention in Cincinnati, Ohio. It will give him a historic opportunity to lay out his vision for individual empowerment, and offer concrete solutions for solving the challenges facing many African-Americans today.

For all the talk of post-racial politics, the Obama camp tries to make his campaign all about race when he speaks to African-American audiences.

When campaigning for Rep. Harold Ford of Tennessee for a U.S. Senate seat in 2006, Senator Obama off-handedly told an audience of African-Americans at a rally that they needed to vote for Mr. Ford because Mr. Obama was lonely in the U.S. Senate. There already were 45 Democrats in the U.S. Senate. Mr. Obama claimed to be lonely because he was the only African-American in the Senate. He was asking those voters to cast their votes in large measure on the basis of racial pride.

Mr. Obamas surrogates will attempt to do the same thing at the NAACP convention. They will urge NAACP members and others to vote for an African-American for president largely out of racial pride. But is that sufficient reason alone to cast this important vote?

Mr. McCains challenge is to redefine that choice. He must make the case that every Americans vote, regardless of their skin color, should be based on who is the better candidate. He must challenge them to rise above racial politics. He must urge the attendees to cast their votes from a forward-looking perspective of what is best for all Americans.

There are several policies he can advocate that would make that challenge.

The first is school choice. Many public schools have failed our children. Unfortunately most of those schools are inner-city ones filled with African-American children, where standards are low, discipline is lax, and the dropout rate is high. School choice enables parents to choose a school that will best educate their child. The key to economic prosperity and a brighter future is through giving children a first-rate education, not mindlessly throwing money at an ineffective public school system that fails to deliver. The success of Washington, D.C.s school voucher program proves this.

The second is energy independence. High fuel prices hit lower-income minority communities hard because they feel the price increases more than many. Mr. McCain must press his full-spectrum energy agenda, including everything from domestic exploration and refining to nuclear power to wind and solar to cars that do not use gasoline. He must make the case that this will drastically reduce fuel prices, and create millions of new jobs.

The third is health care. Mr. McCain must make the case for tort reform, empowering doctors and overhauling the health care industry to focus on families and individuals, and how this will provide better and less expensive medical care than government run health care.

Fourth is retirement security. Mr. McCain should make the case that expanding health care savings accounts and reforming Social Security will enable every African-American to own their own retirement as private property. By adding stocks, bonds, and other investments a comfortable retirement plan can be established, and the remaining assets can be passed to their children to build family wealth across generations.

And finally is national security. Mr. McCain must make the case that the chief task of the president is to protect this nation, and all Americans must vote for the person most capable of protecting their children and giving them a safer world to inherit.

These all work to empower African-American families. By strengthening families to responsibly raise their children and look to their own future, Mr. McCain can make the case that he should be the next president.

Although Mr. McCain cannot win the African-American vote in this election, he can get a respectable percentage. He first will receive points for showing up in Cincinnati, and if he makes the case that his agenda is what will best address African-Americans concerns and safeguard the nation he can close the deal with some.

The presidency is far too important to allow insufficient considerations to determine our vote. We must vote for the person who is best qualified to lead our country. We must vote for the leader who has the strength and the wisdom to keep our nation safe and the vision to successfully deal with the challenges we face.

The NAACP convention provides Mr. McCain the opportunity to demonstrate he is the candidate of post-racial politics in America.