Katie Yoder
|
Posted: Feb 17, 2021 12:01 AM
Share   Tweet
The opinions expressed by columnists are their own and do not necessarily represent the views of Townhall.com. 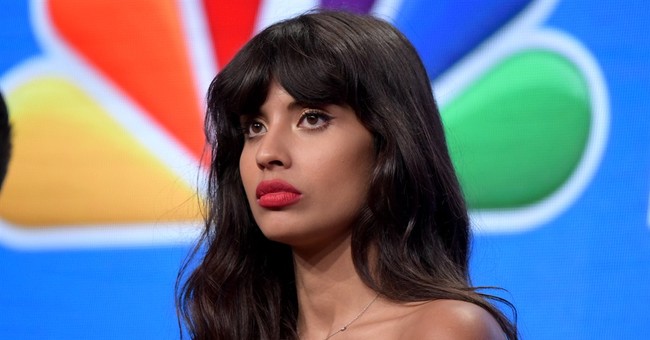 According to one actress, ending her unborn baby’s life only improved her own.

In a recent video gone largely unnoticed by the media, Jameela Jamil doubled down on her abortion position. The Good Place actress came out publicly in support of abortion back in 2019, when she called her past abortion the “best decision” she had “ever made.” In her latest comments made on February 5, she said the same thing. Abortion made her life a “million times better,” she said, while an unwanted baby can “f***ing ruin everything.”

In interviews and on social media, Jamil has become outspoken on abortion.

“The earth can physically currently hold us,” she admitted, “but can it take the imbalance of billions of extra humans that would start coming in quick and fast if we took away abortion?”

Earlier this month, Jamil continued to promote abortion on her YouTube channel. She answered the question, “How did you get to a place where you feel comfortable talking publicly about your abortion?” in a new video.

“I love talking about my abortion,” she began, “because I think it is one of the most important subjects in our generation.”

She’s right – but not for the reason she meant. Abortion is today’s greatest threat to human rights, intentionally ending tens of millions of innocent lives worldwide each year. But instead of condemning abortion, the actress praised it.

“The only side effect I’ve ever had from mine is relief and I think it is the single most important decision I’ve ever made,” she stressed. “And the best one I’ve ever made.”

While many in the media regularly prop up “positive” abortion stories like Jamil’s, women who regret their abortions exist – and want their stories told too.

For Jamil, abortion seemed to be a casual topic. She didn’t need a good reason for an abortion, she said. Wanting one was enough.

“I was not in a dramatic situation, my life wasn’t in danger, I wasn’t a victim of rape or incest in how I got pregnant, I was just not in the right relationship, not ready, not financially stable enough, not emotionally stable enough,” she continued.

Instead, she just “didn’t want a baby.”

“I would have hugely resented a baby at that time,” she said. “I was not in a stable place in my career. I had dreams and things that I’d wanted to and deserved to achieve because I’d worked so hard for them up until then.”

Jamil’s wording points to the lie that the abortion industry so often repeats: That a woman must choose between her children and her career – her baby and a successful life. Instead, a life-affirming society or culture should empower women to do both.

Women – and Jamil – deserve better. That’s why, in addition to personal endeavors by individuals, the pro-life movement so strongly supports pregnancy centers that provide pregnant women and new moms with free housing, medical supplies, clothing, and educational classes, among other things.

Jamil didn’t seem to see choosing life as an option.

“You don’t have to have a super dramatic reason to not want to go through the biggest life change you can ever go through,” she defended. “It’s a huge hurdle in your existence if it’s something that you don’t want.”

But by choosing what she saw as an easy fix – abortion – Jamil misses the opportunity to advocate for better. She misses the chance to say that women should have the ability to choose life and still pursue success in other areas of her life.

According to Jamil, she had no regrets.

“I talk about it because I feel no shame whatsoever about having had my abortion,” she said. And, she added, her opinion was the only one that mattered.

“It doesn’t matter what anyone says to me,” she concluded. “I’m not sorry. It wasn’t wrong. Best thing I’ve ever done. And my life is a million times better for that decision.”

Jamil isn’t the only one in Hollywood who has praised abortion or who has said that she relied on it for her career. In 2017, actress Martha Plimpton joked that her first abortion was “my best one.” The year before that, actress Lena Dunham issued an apology after saying that “I wish I had” an abortion. More recently, in 2020, actress Michelle Williams declared, “I’ve tried my very best to live a life of my own making,” adding that she would not have been able to do this without “a woman’s right to choose.”

But what is women’s empowerment, if it relies on ending the lives of their own children?

Ocasio-Cortez: We Need to Pack the Court Because There's No Checks and Balances
Matt Vespa
West Coast Governors Vow to Make Their States a 'Safe Haven' for Abortions
Sarah Arnold