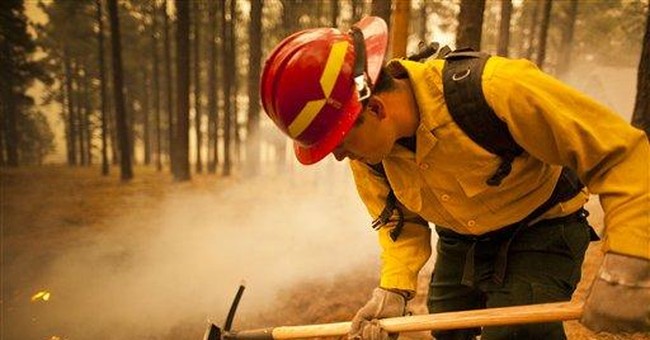 Arizona is burning and the Forest Service, pressured by green environmental groups are to blame for their massive, uncontrollable devastation. The Wallow fire, raging in eastern Arizona near Alpine, Nutrioso and Springerville has burned 408,887 acres, over 600 square miles and is the second largest fire the state has ever seen. The largest in Arizona history was the 2002 Rodeo-Chediski fire, which burned 468,638 acres or 732 square miles of Ponderosa Pine forest. The Wallow fire is only 6 percent contained with high winds on the way and easily could pass the Rodeo-Chediski fire in size.

Gary Kiehne is a 5th generation cattle rancher and business owner in Springerville, Ariz. His ranch, located near Reserve, New Mexico, sits 20 short miles away from the Wallow forest fire.

“The Wallow fire is a result of the U.S. Forest Service mismanagement,” Kiehne says to Townhall.

His father, who will turn 90 in March of 2012, saw a fire like the Wallow coming for years based on observations of the green movement’s influence on how the U.S. National Forest Service (USFS) has managed, or rather grossly mismanaged, the forests for years.

“I predicted years ago that when the weather conditions were right, the Gila Wilderness, a waste of natural resources and the Gila National Forest would go up in flames. Much to my sorrow that day has gone,” Emil Kiehne wrote in a letter to his son. “All of this is a result of overprotection of our natural resources, timber and grass that has grown into a dog hair thicket that cannot be contained. The USFS must go back to allowing multiple use of forest lands to prevent forest fires.”

Under the disguise of non-profit organizations and saviors of the environment and endangered species, groups like the Sierra Club, Friends of the Forest Guardians and the Center for Biological Diversity have been strong advocates against logging, the burning of small natural fires, and grazing on federally held forest land. Excessive Forest Service regulation, Endangered Species Act regulations, clean water regulations and more, prevent the salvaging of dead trees and cleanup of excess dead vegetation. This has resulted in a dangerous and large build up of extremely dry dead trees, excess brush and thick vegetation undergrowth. A ticking time bomb waiting for a single lightening strike to set it off.


“We can’t go in and do anything now because essentially the greens control the USFS,” R.J. Smith, director of the Center for Private Conservation at the Competitive Enterprise Institute tells Townhall. “The environmental regulations and the philosophy prevents them from doing anything to restore the forests to a healthy condition. You literally can’t go in anymore.”


Before the U.S. Forest Service was founded in 1905, with a purpose of managing public lands in national forests and grasslands, smaller, natural fires would clear out excess fuels on a regular basis from the forest floor. Private industry practices such as logging and cattle grazing also kept excess fire fuel to a minimum. However, due to the influence of green environmental groups in the past 30 years, logging and cattle grazing have been essentially outlawed on public lands, resulting in the overcrowding of trees. In some areas of our forests, Ponderosa Pine trees grow at a rate of 300 to 700 trees per acre. The natural amount of trees per acre in Ponderosa Pine forests is between 20 and 50 trees per acre and with an overcrowding of trees, comes more competition for water, prolonging western droughts beyond normal time periods, resulting in more dead trees and more excess fire fuel.

“Today there are no sheep, very little cattle and only two sawmills that work part time, but there are hundreds of government employees doing little or nothing waiting for a vacation or retirement,” Emil Kiehne said in a letter.

On top of that, according to Smith, the majority of the people employed by the Forest Service aren’t foresters at all and instead focus on biology, zoology, among other specialties not related to the health and maintenance of forests.

In October 2003, President George W. Bush signed the Healthy Forest Initiative, which set aside funds for the Forest Service to go in and begin to treat unhealthy National Forests through mechanical thinning, cutting down trees, salvaging of dead and dying trees and through prescribed burns. However, these efforts have been put on hold because the Forest Service is constantly being dragged into court, using taxpayer dollars by environmentalist groups through the Equal Access to Justice Act, to prevent any management of the forests through the Healthy Forest Initiative, citing violations of the Endangered Species Act or other regulations, for trying to manage the forests properly, which would prevent massive forest fires like the Wallow. The Forest Service has moved away from multiple use, meaning private industry, on public lands to policies focused strictly on recreational use dictated by green environmentalist special interest groups.


“Every time these fires break out, because each passing year you get more and more accumulation of fuels in the forests and so when the fires inevitably come, they’re catastrophic. And the greens say, ‘Well you know we can’t get into the forests, can’t to do this, can’t do that because there is all this habitat we can’t disturb and there’s endangered Spotted Owls in there’ and so on. But what happens when fires of this level come through, they essentially destroy everything. They burn down the whole forest and if they don’t kill the endangered species and wildlife or threatened species that are in there, they do destroy their habitat,” says Smith. “It’s having a devastating effect on those species.”

We always hear about environmental groups protesting and screaming about protecting the animals and plants in the forest, yet when there is a massive forest fire, those same green activists aren’t the ones on the front lines trying to put out the fire.


And big fires mean big government solutions and bigger bills being sent to the taxpayer. The knee-jerk reaction to monster fires is to give firefighters more resources and money to fight them, rather than taking a proactive approach to preventing forest fires through the clearing of excess fuels. In addition, the USFS will ask and get more money, taxpayer dollars, to remove remaining livestock from forest lands and to implement even more regulation to “protect” the remaining trees that didn’t get burned.

“Instead of wasting the money on future appropriations of out tax dollars to fight future fires, these funds should be appropriated in the form of grants for low interest loans to ranchers and logging companies for the purpose of constructing saw mills and purchasing livestock and rebuilding the infrastructure including fences, water and roads so that the private sector can harvest the timber and grass off of our Forests.  The lack of harvesting over the last 40 years is the real cause of this fire and it could have easily been avoided had proper management of the forests been allowed by the USFS,” Gary Kiehne wrote in a letter to Congressional Legislators.


These massive fires have major impacts on local community economies in addition to the environment.

“The short term impact to these communities first off, when a fire like this happens like the Rodeo-Chediski fire for example, we had a temporary boom because firefighters and are staying in our hotels and restaurants but then, as soon as they got the fire out, the Forest Service put a ban on anybody coming up here,” Gary Kiehne says. “Our communities are effectively going to die on the vine because of this fire.”

The area where the Wallow fire is burning could be turned into a successful recreational for hunters, fishers and ranchers if natural resources weren’t controlled by the green movement and the USFS.

Ironically, the slogan of the Forest Services’ Smokey the Bear is “only you can prevent forest fires,” yet the green movement in partnership with the USFS are doing exactly the opposite. Natural resources are going to waste, economies are being stalled, homes are burning and the environment is being destroyed thanks to the incompetence, as usual, of the greenies and the USFS. The very thing environmentalists claim they want to protect is being completely destroyed and devastated thanks to their own big government, anti-private industry, nonsensical policies. Environmentalists have fought for control of land in America and now that they have it, they have trashed it, leaving to burn in an inferno nearly impossible to contain which will leave the once beautiful land charred, black and the eco-system changed for a very very long time.

“All public lands should become private lands because what belongs to everyone belongs to no one.” -Emil Kiehne.


The USFS did not return my phone calls for comment.