Katie Kieffer
|
Posted: Mar 20, 2017 12:01 AM
Share   Tweet
The opinions expressed by columnists are their own and do not necessarily represent the views of Townhall.com. 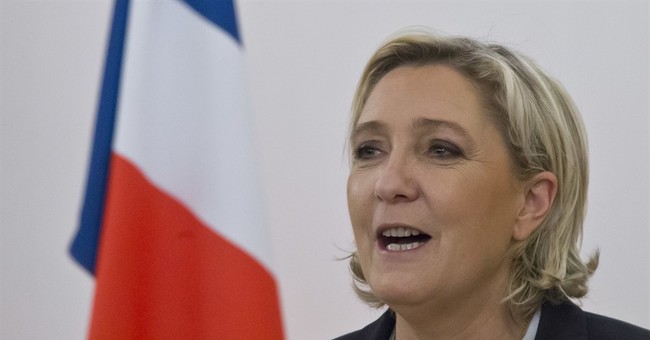 “Quiet voices” that became an “earthquake” is how President Trump explains his populist win in America—and today similar voices in France threaten the world’s most potent globalist structure: the United Nations.

France is the world’s fifth most popular travel destination and sixth largest economy. Not too shabby for a country roughly the size of Texas. Despite these successes, the French people are growing increasingly unhappy with their political system.

In April and May, French voters will elect a new president. Marine Le Pen is the National Front party candidate gaining popularity for her fresh and daring policies.

“If anything, I’m to the left of Obama,” Le Pen quips. If she’s liberal, it’s because she favors liberating France from the constrictions of outdated bureaucracies: “I do not have the slightest bit of confidence in the European Union (E.U.) to protect the borders of the European Union.”

Of course, the E.U. is a micro version of the world’s largest globalist construct: the United Nations (U.N.). So, Le Pen’s popularity in criticizing the E.U. also represents a growing preference for nationalism over globalism.

“Send A Shock Through Europe”

If Le Pen wins, her victory will (in the words of TIME) send a “shock through the rest of Europe.” And if she loses at the ballot box, she will still empower European voters—and spectators around the globe—to demand more transparency from government; to stop settling in silence.

Over time, the U.N. has gained the nickname The Dictator’s Club for its membership inclusion of regimes and dictatorships and for ongoing scandals including child rape by official U.N. peacekeepers. Recently, the U.N. began pushing U.N. Agenda 2030 or “Declaration of Interdependence” to combine the countries of the world into one group controlled by a handful of potentates.

Thomson Reuters Foundation editor-in-chief Belinda Goldsmith puts the cost of implementing Agenda 2030 at $172.5 trillion. (Turns out international coercion ain’t cheap.) Agenda 2030 calls for replacing nationalism with globalism to the extent that: “All countries and all stakeholders, acting in collaborative partnership, will implement this plan,” adopt “shared” wealth; and require “all learners” to embrace common definitions of “cultural diversity,” “gender equality” and “global citizenship.”

Let’s think about how this would work...

Facebook recognizes 71 genders including “Neutrois,” “T* woman” and “Two-spirit,” yet less than one percent of American adults identify with the even the commonly understood term of “transgender.” South Korea has a history of open cultural bribery; most Western countries do not. Australia embraces merit-based citizenship; Sweden embraces open borders.

Even with $172.5 trillion, how do you force the world’s population to agree on gender equality, cultural diversity and global citizenship by 2030—without bloodshed?

Yes, we are a global community—especially in terms of technology. It does not follow, however, that every country should embrace identical priorities and principles. Ultimately, every country is distinctive due to its economic output, culture, and foreign affairs.

In 1997, then-Rep. Ron Paul introduced the American Sovereignty Restoration Act to extract the United States from the U.N. Like many visionary ideas, Paul’s proposal took years to gain popular momentum.

20 years later—in 2017—the President of the United States as well as presidential candidates in countries as far away as France are preaching nationalism to thousands of cheering voters. And U.S. lawmakers are revisiting the American Sovereignty Restoration Act (H.R. 193).

President Trump is proposing a temporary travel moratorium (not “ban”) on six countries that the United States does not currently properly vet—and judges in Hawaii and Maryland last week claimed he’s attacking the religious liberty of Muslims.

France has suffered the loss of 231 people due to Islamic terrorist attacks in the past two years alone and Le Pen is resonating with French voters when she calls for restrictions on headscarves in public and border controls.

We can’t easily amend the religious liberty clause in our Constitution—which treats Islam as equally valuable to society as other religions. We CAN stop using the term “religion” as an excuse to implement globalism. Ultimately, Le Pen and Trump are promoting policies that reform the national security and economies of their respective countries. Religion is not the target.

Ron Paul’s “revolution” posters highlighted the word “love”—a nice reminder that violence and coercion exacerbates most problems. The best way to achieve a productive, prosperous and peaceful world is to let each country be free to implement its own policies.

It’s time to crush The Dictator’s Club. May the quiet voices in France soon send the world the message that nationalism trumps globalism.