Katie Kieffer
|
Posted: Feb 20, 2017 12:01 AM
Share   Tweet
The opinions expressed by columnists are their own and do not necessarily represent the views of Townhall.com. 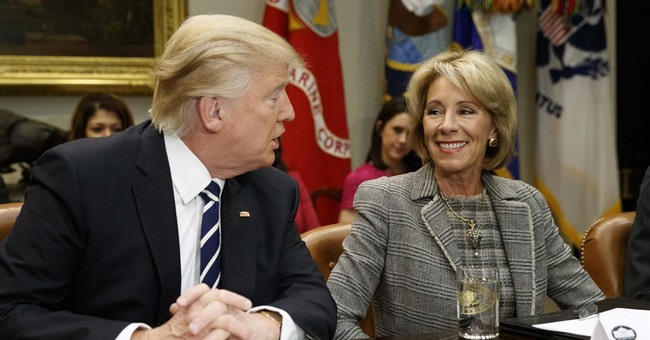 “Lame! Lame! Lame!” Betsy could have hollered back at activists who were upset that she intended to reform a school badly in need of reform. But she didn’t.

Betsy took the high road and noted that the teachers she met at Jefferson were hobbled by bureaucracy to such an extent they were not “empowered to facilitate great teaching” and in “receive mode” or “waiting to be told what they have to do, and that’s not going to bring success to an individual child.”

Jefferson is not an “excellent,” “great” or even “very good” school. In fact, less than one in two Jefferson students are meeting—or even moving toward—“grade-level expectations,” reports the Washington Post.

Poor student performance—subsidized by the taxpayers—didn’t stop Jefferson administrators from lashing out at Betsy with a torrent of unprofessional tweets such as “We’re about to take her to school.”

No doubt there are many fine teachers at Jefferson and within America’s overall public school system. But it’s high time we pull the plug on the pool of corruption—teachers’ union bloat—responsible for deteriorating America’s education system.

DeVos views unions as a corrupt wing of a political party rather than an advocate for teachers or students, saying: “Most of the Democrats have been supported by the teachers’ unions and, not surprisingly, have taken the side of the teachers’ unions.” We must support Betsy in executing reform.

Unions Loathe Teachers, and the Feeling is Mutual

“A sad day for children,” pouted American Federation of Teachers (AFT) president Randi Weingarten when DeVos was confirmed as Education Secretary. Actually, it was a great day for children because DeVos is dedicated to giving teachers the freedom essential to nurturing the minds of children.

Millennial union members likely agree with DeVos when she says she’s more interested in teacher “empowerment” than growing the government. As a generation, research shows that Millennials put a very high value on obtaining a meaningful career—so it’s no surprise that unions are falling out of favor with young teachers.

No one goes into teaching to get rich. To do so would be insane. At the end of the day, most teachers desire fulfillment from their jobs. And you can’t be fulfilled if your hands are tied.

In North Carolina, last summer, teachers were handed a 57-page manual and barred from using the pronouns “boy” or “girl” in the classroom because it might offend Sensitive Samantha the transgender student. This sort of union-endorsed teacher censorship is becoming the norm in American public schools—and many educators are fed up.

Nearly 90 percent of Americans attend public school—where they receive such abysmal educations that the United States doesn’t rank among the top 10 brightest countries.

The latest available data from Program for International Student Assessment (PISA) tests—taken by 15-year-old students in 72 countries and measuring aptitude in reading, science and mathematics—shows American schoolchildren have fallen behind. Not to demean Estonia, Macao or Slovenia but there’s no excuse for students from these countries to be beating students from the world’s “super power” in reading, math and science respectively.

One of the best outcomes of weakening teachers’ unions is that we could begin paying for objective performance, weeding out bad apples, and motivating the best teachers to challenge our children in the classroom. Unions claim to help teachers negotiate fair wages—but the data shows there’s no wage problem for teachers.

“In terms of average pay for the profession [of teaching], the best we can say is that we are probably getting it about right,” University of Georgia economics professor Jeffrey Dorfman writes in Forbes. Utilizing data from the Bureau of Labor Statistics’ National Occupational Employment Wage Estimates, Dorfman shows that the average grade school and high school teacher is paid $56,420/year and $58,170/year respectively—around $10,000 more than the national average across all industries.

Teaching at a private school—where funds are volatile and tied to donor generosity—can be less lucrative. Educators at these schools forfeit pay and often commute long distances to teach in an environment where they will have the freedom to write a muscular curriculum for engaged students. Teachers at private schools consistently do more with less (pay; technology; facilities; and support staff)—proving that scarcity, not bloat, is the mother of ingenuity.

Pass Betsy’s message on. Let’s drain the teachers’ union swamp and save our students.