Katie Kieffer
|
Posted: Apr 18, 2016 12:01 AM
Share   Tweet
The opinions expressed by columnists are their own and do not necessarily represent the views of Townhall.com. 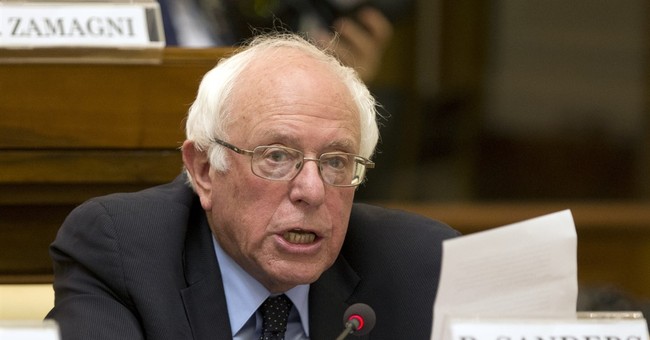 Bernie Sanders was hit hard last week when the CEO of Verizon called him out on his hypocritical support of employment practices that will make it harder for Bernie’s voter base—Millennials—to earn a living wage.

“Feeling the Bern of reality yet, Bernie?” Verizon CEO Lowell McAdam asked after the socialist senator accused Verizon of planning to “outsource decent paying jobs” due to “corporate greed”—and then hugged union supporters on the Verizon picket line in Brooklyn, New York.

Verizon workers went on strike in Washington, D.C. and nine eastern states last week. It’s notable that New York’s presidential primary is on April 19, and Bernie chose to pose for hugs with strikers in the Big Apple.

But this was definitely not a photo op. Bernie cares about the little guy.

Union membership recently fell to a 100-year-low and young people ages 16-to-34 make up just 14 percent of union workers as monthly dues rise to over $50 a month in many cases. There’s also initiation fees that range from $50-to-$100. This is real money that a Millennial working for Verizon—while still paying back student loans—could put toward their monthly phone bill, rent, groceries, gas, or entertainment costs.

On top of high union fees, the big unions fighting Verizon—International Brotherhood of Electrical Workers and Communications Workers of America—are demanding that Verizon proffer provisions that will actually hurt Millennials.

For example, studies show that most Millennials prefer to work flexible schedules. Verizon proposes to cut costs by enabling more employees to work remotely or from home. But Sanders has joined the union bosses in accusing Verizon of a conspiracy to send jobs offshore.

This couldn’t be further from the truth. Last year, Ernst & Young did a study showing that if companies do not offer their Millennial employees flexible schedules, they will “lose” the best young talent.

Many of today’s tech-savvy young people simply don’t need to drive into a brick and mortar office to get the job done. Fiscally-strapped, they also prefer more time and funds for family and friends over spending precious cash on a long commute; day care; or fancy office attire.

Union honchos also are rattling their sabers for cushy pensions. Additionally, they seek to make it hard for Verizon to fire employees at will. But these “benefits,” which Millennial union member dues go toward defending, will not benefit Millennials. Rather, they cushion Verizon employees who have been with the communications firm for ages and who want to ride off into the sunset with glory—deserved or not.

For over ten months, Verizon has been trying to get unions to compromise on an additional item that obviously deserves compromise: health care benefits. Verizon is nice enough to provide its employees with some health insurance coverage. But Verizon argues that the costs of healthcare are soaring.

ObamaCare or the Affordable Care Act raised the monthly premiums of young women by 30 percent and young men by 73 percent between 2013 and 2014. Costs continue to rise as major health insurers warn about premiums rising yet again.

A “greedy corporation” that pulls in “billions in profits” while practicing tax evasion are accusations that the Sanders campaign hurls at Verizon.

While it’s true that Verizon did pull in $39 billion in profits over the past three years, Verizon also paid nearly $16 billion in taxes over the last two years. Sanders conveniently fails to mention how much Verizon pays in taxes.

Understandably, concepts like budgeting and making payroll are difficult for Sanders to grasp since he never had a notable job—other than being a politician. Nor has he successfully run a company where scores of other human beings were dependent upon him for their daily sustenance. Lowell McAdam has. And so before Bernie throws stones at thriving corporations like Verizon, he should get a job at one—or try to start one.

Before Bernie defends unions that are working against—not for—the average young American who is pledging to vote for him in November, he should get in touch with reality. May this be the lesson Bernie learns from being Bern Slapped by Verizon’s CEO.