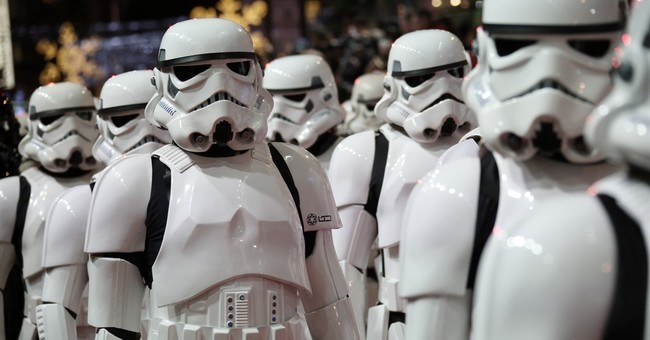 Star Wars offers five priceless political lessons that the newest movie, The Force Awakens, reminds us to exercise. Grab your lightsaber and fear not: I’ll steer clear of spoilers as I explain how we can take back our American Dreams.

In Star Wars, as in politics, there is a “Force”—or power—that can be wielded for good or for evil. Jedis trained to use the Force for noble purposes, whereas the Sith exploited the Force for evil. Here’s how we can train ourselves—and our politicians—to use political power for good.

Jedi Master Yoda trained Luke Skywalker to understand the Force. In contrast, a little known fact about House Speaker Paul Ryan is that he began his political career by interning for John Boehner. Cavemaster Boehner trained Ryan to wield political power by giving Democrats everything they ask for. In Star Wars vernacular, Ryan may as well have trained under The Emperor.

Last week, Republicans in Congress followed Ryan’s lead and voted for a budget with $1.15 trillion in spending, thereby funding everything President Obama wants. Obama was so enthused that he picked up the phone and called Ryan to thank him for “helping government work.”

Planned Parenthood; sanctuary cities; the release of criminal illegal immigrants; and an insufficiently-vetted Syrian refugee program are examples of the initiatives Ryan funded and which Obama calls helpful. Aborting innocent babies and endangering more young women to die at the hands of criminal immigrants in sanctuary cities like Kate Steinle could only be considered “helpful” in an evil Empire. But in the United States of America, we uphold the rights to “life, liberty and the pursuit of happiness.”

Republicans are terrified of shutting down the government over matters of principle. Desperate to be liked by swing voters, Republicans reach across the aisle without asking Democrats to reach back in return. In truth, every time Republicans cave, they lose respect and lose elections.

Ryan grabbed a megaphone and declared: “I’m sorry for being a Republican!” when he led his fellow GOP legislators to pass a budget that funds everything Republicans purport to stand against: big spending; weak national security and the devaluation of human life.

Presales for The Force Awakens were eight times higher than that of Hunger Games. Why? For at least three generations of Americans, Star Wars represents the hope that the power of goodness, wielded by a few ordinary but courageous individuals, will overcome evil. Compare Star Wars’ popularity with that of Congress’ popularity. The latest Harvard research shows the majority or 57% of Millennials disapprove of the Democrats in Congress… and most Millennials lean left!

77% of Millennials disapprove of Republicans in Congress, and we can expect that number to increase because my research shows that transparency and consistency are very important to Millennials. Ryan and his GOP groupies are neither consistent nor transparent.

Lesson: Train yourself under a true political master like George Washington, JFK, or Ronald Reagan rather than modern nubes like John Boehner.

2.) The Millennium Falcon Was Built By Entrepreneurs

“If you’ve got a business—you didn’t build that. Somebody else made that happen,” President Obama is notorious for stating. Obama is clearly not a Star Wars fan. If he were, he’d embrace innovation and rugged individualism like the mastermind of Star Wars: George Lucas.

Lucas worked with a shoestring budget and with what would today be considered Stone Age technology when shooting the original Star Wars. Yet his entrepreneurial creativity turned him into a billionaire. For example, Lucas built the ships and transportation systems for A New Hope by salvaging “interesting-looking spare parts from model kits and junkyards,” reports TIME. And despite its primitive beginnings, Lucas’ computer-graphics department was so forward-thinking that the man behind the iPhone, Steve Jobs, purchased it and turned it into Pixar.

The Force Awakens, directed by J.J. Abrams, continues this entrepreneurial approach to set design, converting salvaged parts into galactic luxury mobiles and avoiding the use of modern shortcuts like computer-generated imagery (CGI) whenever possible. The lesson for Republicans: think outside the box, and the galaxy will reward you at the ballot box.

Star Wars is relatable and inspiring in large part because, as Carrie Fisher (Princess Leia) tells TIME, the heroes in Star Wars are “not superheroes.” The protagonists have flaws, as do real people like you and me. It is harder for a flawed person to stand firm on principle than an omniscient superhero—but it’s still very possible. And that’s our inspirational lesson.

Like Obama, Ryan is also a weak Star Wars fan. “Obama got more of what he wanted from Republicans than he ever got from Reid and Pelosi, just in terms of dollars and policies,” Rush Limbaugh said on his December 18 talk radio show.

In politics, the hero fights for his constituents. If Ryan wanted to stand up for the young people of America—over a fourth of whom live at home with their parents well into their 30s out of financial necessity—he would fight to secure our borders rather than defund the border. Jobs for college-educated American Millennials are being deported to Mexico and both parties are culpable. Both parties are so ravenous for new votes that they are prepared to abandon their current bases.

Star Wars shows that average people can overcome their weaknesses to become heroes. You don’t have to be a politician to make a positive political change. Be like a Jedi and build upon the power within your grasp.

New research from the non-partisan Congressional Management Foundation shows that it takes less than 30 tweets or Facebook posts to grab the attention of legislators. Get a few friends to join you in speaking out on social media, and soon your voice will be reverberating in Washington.

The first Star Wars movie, released in 1977, was A New Hope. Fast forward to today. Millennial voters for whom Barack Obama promised “Hope and Change” can now go to HillaryClinton.com to see a graphic designed by her campaign featuring a Star Wars spaceship in the shape of the letter “H” flying overhead to symbolize that Hillary is their new hope. It’s up to you and me to help Millennials learn the truth.

Over half of working Americans are making less than $29,000 a year; the average college debt load is $33,000; and our president is applauding a budget that threatens to extend this new hopelessness into perpetuity. Be like Yoda and train your friends—especially those younger than you—to channel the good side of political power and become heroes.