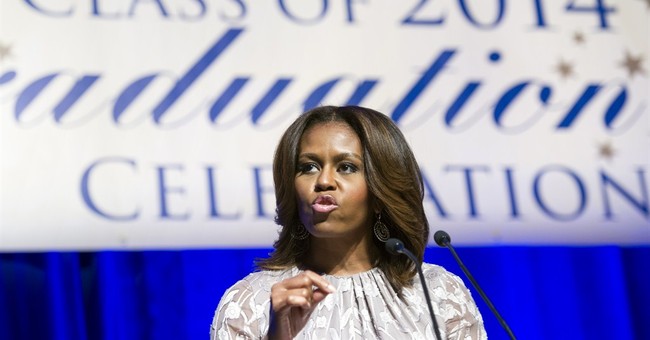 Former Marine and anonymous street artist “Sabo” uses paint and provocative posters to compel Americans to think outside the box of political correctness.

Sabo is not a “kid-friendly” artist. His art incorporates the middle finger, a topless Wendy Davis “Barbie” doll, and Nancy Pelosi twerking in latex lingerie. But Sabo uses incendiary language and images solely to get Americans to think about hard issues rather than sweeping them away with political correctness.

Sabo’s use of provocative words and images (as seen on his poster of a shirtless, tattooed, and smoking Sen. Ted Cruz) is in the vein of famous artists of the past—from Michelangelo to Picasso—who employed visceral emotion and shock-appeal to shake up their culture. One of the most important roles that an artist plays in society—peacefully and silently— is to compel his or her contemporaries to reflect.

Unlike some street artists (think the UK’s Banksy)—who justify defacing public and private property to showcase their artistic viewpoints—Sabo displays his philosophical artwork via removable posters.

Sabo relies on donations and benefactors to create his work. He hangs his posters up at night by himself or with the help of a driver. He has perfected various techniques for hanging the posters very high—such as on power lines—to ensure they stay up. Many of his posters are defaced or torn down within a matter of hours.

No one is “safe” from Sabo’s artistic analysis. Sabo goes after popular Hollywood comedians for their (silent or spoken) support of President Obama’s inhumane drone policy. And he goes after those who physically assault gays—as well as the gay lobby—for very different reasons.

Sabo is unhappy by the number of Americans who still struggle to find jobs four years into what First Lady Michelle Obama has called a “huge recovery.” Sabo maintains that the promise of “hope” has materialized into “cope.” And he’s frustrated by the current administration’s disrespect for private property through the use of no-knock SWAT attacks.

As a former Marine, Sabo also uses his artwork to speak out in defense of veterans. Sabo’s VA Scandal poster depicts the “new purple heart” as a numbered paper stub similar to what you might get at Target or Walmart when you’re waiting in line to make a return. This particular poster hits a bit too close to home. News broke over July 4th that a veteran died in Albuquerque, NM when—due to standard VA hospital policy—he was forced to wait 30 minutes for an ambulance to arrive although staffers could have transported him to the emergency room located just 500 yards away.

Sabo says on his website that one of his overarching goals is to speak to the “young” and “urban” in their own language. Sabo deserves credit for attempting to reform his culture and catalyze discussion rather than simply preaching to the choir. After all, nothing will ever improve in society if we tiptoe around tough issues and pretend that political correctness will stop veterans from dying; foster equality or safeguard our natural rights.

Sabo encourages individuals like you and me to get involved by speaking out, engaging in open-minded discussions and putting forth concrete solutions. I’ve tried to lead by example by using my pen to proffer hope and solutions in my new book, “Let Me Be Clear.” When we each speak out using our unique talents, we will heal our economy and revitalize our culture for the benefit of all.