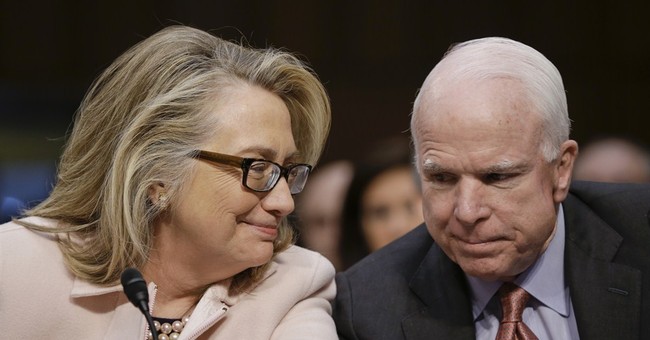 Chelsea Clinton is pregnant. Which means the odds of Hillary Clinton running for president have dropped down to 99%. Why bother with baby showers when you can be chilling with a hip grandfather like John McCain?

Bill Clinton told ABC News last September that his wife is more interested in being a “grandmother” than President of the United States. Apparently, Slick Willie was wrong. Instead of fretting over colors for the baby’s room, Hillary is flitting around the country to promote her brand and getting chummy with McNasty (McCain’s actual high school nickname).

You would think that Hillary would keep the man who lost the 2008 presidential election at arm’s length. However, it seems that she and he are kindred spirits and their friendship has been blossoming since 2004 when, according to the New York Times, they apparently threw back shots of vodka in a friendly drinking contest at Hillary’s behest. (Hillie knows how to partaaay!)

In 2008, Bill Clinton told the press: “She and John McCain are very close.” How close we will never know. After all, Clinton has a very unique way of defining the meaning of commonly used words in the English language. Such as “is.”

Last week, McCain announced that he invited Hillary to join him as a special guest speaker at his Arizona retreat—Sedona Forum—to discuss the ethics of leadership. Yes, you read that correctly. McCain asked the woman whose hands bear the bloodstains of American diplomats who died in Benghazi to share her tips (or tricks?) on how to (look?) like a value-oriented leader.

McCain released a public statement praising Hillary as his “friend” and gushing that he was “…hard-pressed to find a leader with Secretary Clinton's informed perspective on the many challenges facing America across the globe.” Awww. How touching.

We already know that McCain loves attention. He also seems a bit sour about his 2012 loss given his refusal to cede the limelight to Republican presidential hopefuls like Sen. Ted Cruz or Sen. Rand Paul. When Paul and Cruz gained national attention and bipartisan praise for their stance against lethal drone force, McCain pouted: “it’s always the wacko birds on the right and left that get the media megaphone.”

Meanwhile, Hillary is aggressively working to secure the 2016 youth vote. Last week, I spoke at Southern Methodist University in Dallas, Texas. After my talk, I picked up a copy of the SMU’s student newspaper, The Daily Campus. The headline story was: “Campus women get political,” featuring a large photo of Hillary and an effusive article announcing an upcoming on-campus speech by Hillary’s “Director of the Women’s Office at Ready for Hillary.” (‘Ready for Hillary’ is the former secretary of state’s super PAC.)

So, Hillary is already greasing the wheels of her 2016 presidential machine—sending her minions to college campuses to enchant the Millennial swing voters into falling in love with her, just as they fell in love with Obama and helped him win two consecutive elections.

Here’s the thing: if Hillary wants to win the youth vote, why is she associating herself with a monumental loser like McCain? If I were Hillary, I would stay as far away from McCain as possible because Millennials generally think of him as an ornery battle-axe who does not support individual freedom. Any association with McCain will hurt Clinton when it comes to the all-important youth vote in 2016.

Rush Limbaugh once said: “I hope Obama fails” (to destroy America with his socialist policies). Well, I hope Hillary Clinton fails. Which is why I hope she keeps hanging out with McCain. Because, from a politically strategic perspective, their friendship is our best shot at reviving the American Dream.