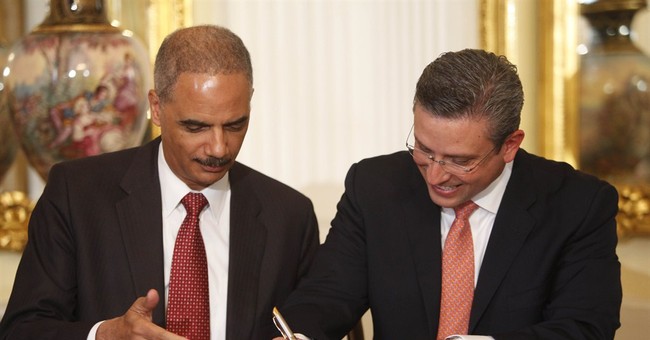 Toilet paper holders. Cup holders. Cigar Holders. Various holders do an excellent job of "holding." Eric Holder is a U.S. attorney general who is ironically failing to live up to his name and uphold the law.

Holder has been Obama’s attorney general for well over four years, and he has never made a public statement about "stand your ground" laws. Suddenly, last week, as Zimmerman trial verdict protesters called for the abolishment of Florida’s stand-your-ground law, he decided to end his silence. Holder probably figured: “The media’s got my back here. If I fudge about 'stand your ground' laws, they won’t hold me accountable.”

So, on Tuesday of last week, Holder gave a speech at the annual conference for the National Association for the Advancement of Colored People (NAACP) and stated that "stand your ground" laws:

“…senselessly expand the concept of self-defense and sow dangerous conflict in our neighborhoods” and “By allowing, and perhaps encouraging, violent situations to escalate in public, such laws undermine public safety.”

On Wednesday, Minnesota Governor Mark Dayton chimed in with his two cents worth of nonsense:

“…these kinds of laws … have catastrophic effects.” He added: “My personal opinion -- I don’t have all the information the jury had -- Mr. Zimmerman went way beyond what was necessary in the situation.”

Dayton vetoed a "stand your ground" law in February that would have made Minnesota’s self-defense law similar to Florida’s law. State laws vary, but 25 states have some version of "stand your ground" permitting citizens to remain in the place where they are lawfully located when confronted by an unlawful intimidation; instead of retreating, they may use lethal force to defend themselves.

Dayton is a career politician and trust fund kid who is better qualified for yachting with elite partiers like John Kerry than governing the state of Minnesota. But Holder passed the bar exam and took an oath to defend the U.S. Constitution at one point in his life. Unless Holder suffers from premature dementia, he knows better than to disparage 92 years of Supreme Court precedent as well as the 2nd and 4th Amendments.

Here are the FACTS that Holder and Dayton failed to mention:

1) The day before Holder made his comments, a female jury member in the George Zimmerman trial (identified as B37) went public for the first time on CNN’s Anderson Cooper 360 program. She stated that all six of the jury members who found Hispanic Zimmerman not guilty of second degree murder of black Trayvon Martin believed that race was absolutely not a factor in Martin’s death.

She added that she had “no doubt” that in the moments before Zimmerman pulled out his gun he feared Martin was about to kill him. After all, a neighborhood eyewitness had testified to seeing Martin on top of Zimmerman in a MMA style “ground and pound” mount, hurling blows at Zimmerman.

2) Zimmerman waited to use lethal violence as a last resort, when Martin was smashing his head into the cement, and he thought his head was going to “explode” after Martin had caught sight of the gun holstered at Zimmerman’s hip and yelled: “You’re going to die tonight!” Many legal experts, including law professors and prosecutors, have concurred with what jury member B37 suggested to CNN: The Zimmerman case was a case of basic self-defense, not "stand your ground."

3) "Stand your ground" laws do not increase violence, as Holder and Dayton suggested. Quite the opposite, actually. States that implemented some form of stand-your-ground law reduced overall violent crime by 11 percent and murder by nine percent, Professor John Lott has shown in his book More Guns Less Crime(3rd Ed.).

If anything incites violence, it is the irrational and vitriolic comments made by leaders like Holder and Dayton, not "stand your ground" laws.

The Zimmerman incident occurred in Florida. But in California last week, protesters threw rocks at police, punched an officer in the chest, assaulted a news photographer and reporter to the point of hospitalization, vandalized a Wal-Mart store, chased down a restaurant server with a hammer, jumped on cars and ran recklessly through the streets of Los Angeles and Oakland.

If these California protests are not examples of “unnecessary” violence that “escalated in public,” what are they? California’s violence was not provoked by "stand your ground" laws in Florida; it was provoked by leaders like Holder who are whipping up anger and animosity between Americans who would otherwise be friends and neighbors.

Stand your ground against Eric Holder’s rhetoric, because he is failing to uphold the law. If there were a contest to see who did their job better -- Eric Holder or a toilet paper holder -- the winner would be the latter.