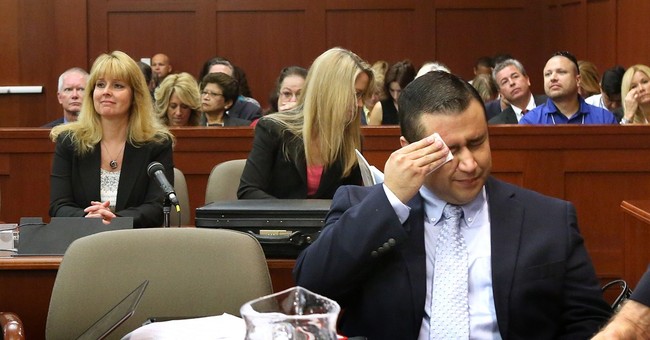 If you plan to mount a dummy on TV, it’s wise to not bring yourself down to the level of the dummy. But a wrestler did exactly that when he tried to defend Trayvon Martin by demonstrating a MMA (mixed martial arts) mount on HLN After Dark.

On July 10, HLN After Dark Host Vinnie Politan invited a black guest named David Otunga, a WWE Smackdown wrestler, to discuss the George Zimmerman trial. Otunga made a fool out of himself trying to disprove Zimmerman’s claim that he shot 17-year-old Martin out of self-defense.

Politan told viewers that he and Otunga wanted to demonstrate their “interpretation” of the way 28-year-old Hispanic Zimmerman claimed 17-year-old black Martin mounted him and began punching him and smashing his head onto the concrete in Zimmerman’s neighborhood on the evening of February 26, 2012.

First, Politan had Otunga demonstrate a position where Martin would have been mounted high—near Zimmerman’s armpits. This position would not have made sense at the time of the shooting because neither Zimmerman nor Martin could have reached for the gun holstered at Zimmerman’s hipfrom that position.

Next, Ontunga demonstrated a position more likely during the time of the shooting, given that Zimmerman told law enforcement he tried to squirm out from under Martin to move his head off the concrete and onto the nearby grass. Sounding like a fool, Otunga tried to show that Martin was in a position of weakness even though he was clearly on top of Zimmerman in a “ground and pound” position of strength:

OTUNGA: Otunga straddled a dummy MMA style and then conceded that from this mount, both Martin and Zimmerman could have reached for the gun. This backed up Zimmerman’s claim that it was only afterMartin caught sight of Zimmerman’s weapon and yelled: “You’re going to die tonight!” (indicating that he planned to use Zimmerman’s gun against him) that Zimmerman reached down for his gun and shot Martin in self-defense.

POLITAN: “OK, and from that position, can you punch?”

OTUNGA: Stiffly threw his arms straight out in the air and punched without moving his torso forward naturally. “Not really good. I’m barely—this is my full extension—barely touching his chin there.”

OTUNGA: “[I] wouldn’t have any strength trying to punch him there. I’d want to be higher up.”

POLITAN: “OK. But in this position, the gun is exposed?”

OTUNGA: “The gun is exposed.”

CNN’s Piers Morgan did a far better job of covering the Zimmerman trial on July 10, making Otunga look like an even bigger goon. (Just because you lean left doesn’t mean you need to lean stupid, which is the direction Otunga chose.)

While Otunga was making an ignoramus of himself on HLN, Morgan was making some very good points on CNN as he discussed the Zimmerman trial with two black guests, talk radio host David Webb and New York Times columnist Charles Blow. When Blow suggested that Zimmerman’s story was inconsistent, Morgan countered:

“…If you believe Zimmerman’s version of events, he’s pretty well concussed from the beating he says he got; he’s not thinking straight, he’s probably fired the gun… and there’s the fog of war that comes with all these things; we all know that; we’ve heard from all the witnesses, all saying different things; so it doesn’t entirely surprise me he’s not completely accurate and if you do take everything he says at face value, the question then becomes, is he entitled to use his weapon in that circumstance?”

Morgan added: “The screams are important in this case…the prosecution suddenly seemed to concede that it was Trayvon on top and I just don’t think someone on top is the one crying out for “help;” it just doesn’t make sense.”

Zimmerman’s claims were also supported by an eyewitness account as well as testimony from a forensic pathology expert:

On June 28, an eyewitness to the altercation who lived in Zimmerman’s neighborhood, John Good, testified that he believed he saw Martin straddling Zimmerman in a “ground and pound” or MMA position: Martin was on top, hurling blows down on Zimmerman. Good added that he thought he heard Zimmerman cry out for help.

On July 9, another witness for the defense, Dr. Vincent Di Maio, testified on the bullet’s trajectory: “This is consistent with Mr. Zimmerman’s account. That Martin was over him, leaning forward, at the time that he was shot.” He also said that the injuries on Zimmerman’s face and head were consistent with punches and the assault Zimmerman had described to the police. (Di Maio is a highly renowned and published expert on gunshot wounds and forensic pathology.)

So, what was Otunga thinking on July 10 when he tried to refute this evidence as well as basic fighting knowledge and common sense? At minimum, he was looking like a pretty boy who didn’t know how to fight. But since he’s a WWE Smackdown wrestler who does know how to fight, he just came across as a prejudiced oaf out to further taint the public’s perception of an innocent Hispanic.