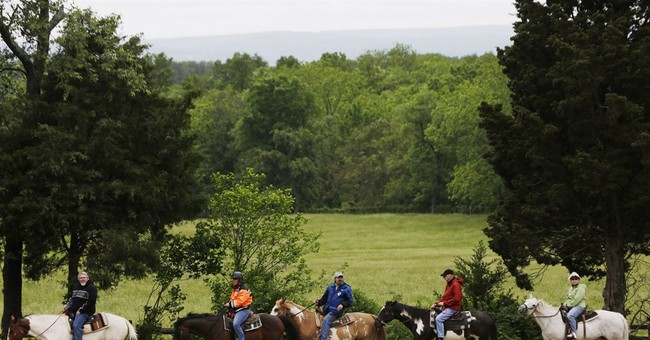 Don’t give up on Hollywood. I just had the exciting opportunity to pre-screen Gettysburg director Ron Maxwell’s third Civil War movie premiering Friday, June 28. If you see just one movie this summer, make it Copperhead.

Copperhead is worth seeing because it re-tells American history with an intimate, engaging and non-textbook approach. Away from the mighty battlefields and memorable generals we finally get to experience behind-the-scenes struggles of the Civil War through a few friends, lovers, neighbors and family members trying to speak their minds while practicing what they preach.

Copperhead is based on a novel by Harold Frederic, who lived through the Civil War as a boy. The lead character, Abner Beech, opens the movie by saying: “They called us people in the North that didn’t want the war Copperheads.” When Abner’s hired boy puzzles over the hatred and violence exerted by one-time friends and neighbors, Abner explains: “War is a fever son… puts you out of your right mind; you do things you wouldn’t do when you’re sick…”

President Obama is on the verge of bypassing Congress and hauling the United States into a war in Syria much like his war in Libya, which he called “kinetic military action” in order to sneak past the Constitution. When it comes to war, Obama is hardly transparent with the American people.

Obama feigns that he is only now contemplating arming sketchy Syrian rebels. But the truth is that he and former Secretary of State Hillary Clinton have been secretly arming Syrian rebels with links to terrorism for a very long time; by all major accounts, Obama’s gun-running program played a key role in the deaths of four Americans in Benghazi, Libya on September, 11, 2012.

War, especially civil war, comes at a price and it is far easier to get into war than out of war. Copperhead takes us into the homes of a few families who started out as neighbors with different beliefs. Instead of free speech and open debate, violence became the mode of making one’s points clear. In a particularly emotional scene, two grown men and neighbors-turned-enemies cling to each other in open despair, tears filling their eyes, as they realize they may have lost their most precious possessions in their rage.

As our own young men and women come home without their limbs after bravely fighting Obama’s perpetual wars in the Middle East, Copperhead reminds us that young boys also lost their eyes and limbs fighting in the Civil War and that African Americans were: “bought and sold and whipped just ‘cause the color of their skin.” The movie was humbling to watch; it forces one to contemplate what it means, and how hard it is, to truly “love your neighbor as yourself.” As one teenage boy tells his abolitionist father pushing him to fight: “I didn’t know the ‘Lord’s work’ was killing. … There’s too many folks carryin’ swords; not enough pulling plows.”

Maxwell describes his vision behind Copperhead and how it is different from his previous Civil War films: “I wanted to explore something more intimate. My previous pictures focused on officers and leaders, but, in reality, the war was fought by teenage boys, most from small towns whose families ended up devastated by the war even if no battles were fought nearby. … Not everybody who hated slavery or loved the U.S. Constitution was willing to send their children off to die or be maimed in a bloody battle against fellow Americans. That fascinating reality is the force driving Copperhead.”

Copperhead also drives home the importance of free speech as a way to resolve conflict before jumping into outright war. “If there’s a political point to the film, it’s a defense of dissent,” says screenwriter Bill Kauffman.

Thomas J. DiLorenzo, Professor of Economics at Loyola College in Maryland recently wrote a book called Lincoln Unmasked where he explains history in a way that echoes the message in Copperhead. DiLorenzo explores how, after the Civil War, Americans forgot that the founders intended our union to remain strong and voluntary: “The Jeffersonian, states' rights tradition, for example, has been whitewashed from the history books thanks to the efforts of several generations of gatekeepers and court historians. …[states’ rights] was an important Northern as well as a Southern political doctrine prior to 1865.”

There are valuable lessons in life and history folded into this fascinating new film coming out of Hollywood. You can request the movie in a theatre near you by visiting this site.