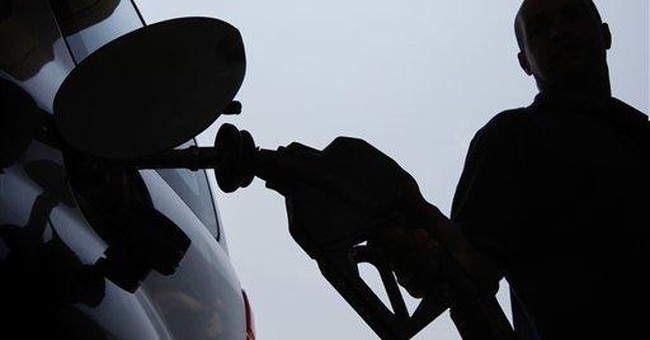 A plumpish girl making pizzas behind a counter methodically spreads red sauce on a circle of dough as she vents loudly to the cashier: “Do you drink soda pop? No? Well, I do. They say that pop makes you gain weight. I always gain weight from stress and I’m so stressed out. I don’t have enough money. I need a car for college and I can’t afford one. And gas is outrageous. It’s like $5! I mean, I could buy a bike for $5!”

A few minutes later, the girl hands me my oven-ready pizza without looking up. She is visibly distraught. I feel bad for her as I walk away thinking, “Thanks for ruining our economy, President Obama.”

Obama claims he doesn’t manipulate gas prices. He told Fox News this month: "You think the president of the United States going into reelection wants gas prices to go up higher? Is that—is there anybody here who thinks that makes a lot of sense?”

I say: “Yes, Mr. President, that makes a lot of sense. Your regulations and unconstitutional executive orders have caused the price of gas to skyrocket. So, you do control gas prices. Want examples? I’ll give you five.”

1.) The Department of Insider Trading

Mirror, mirror on the wall, who is the worst inside trader of them all? President Obama.

I think a better name for the Department of Energy (DOE) is the “Department of Insider Trading.” Obama uses the DOE to cut unconstitutional, back-door deals with taxpayer dollars. End result? Rising gas prices.

Obama gave insider seats on the DOE to venture capitalists backing clean-tech firms. Then, his “administration embarked on a massive program to stimulate the economy with federal investments in clean-technology firms. … $3.9 billion in federal grants and financing flowed to 21 companies backed by firms with connections to five Obama administration staffers and advisers,” reports the Washington Post. For example, he threw $535 million in the form of a taxpayer-backed loan guarantee at the now defunct solar firm, Solyndra, that shed over 1,000 jobs.

Like the Department of Education, the DOE is an unconstitutional pet project of President Jimmy Carter. Carter wanted to be king and therefore loved creating extra-Congressional, Cabinet-level agencies. He knew he wouldn’t be able to amend the Constitution to properly give himself control over energy, so he bullied Congress to hand its legislative power over to the executive branch; he signed the DOE into law in 1977.

Since 2008, Obama has utilized the unconstitutional DOE to pass out taxpayer funds to his friends in clean-tech firms that go belly-up. This abuse of taxpayer dollars is effectively an energy tax.

Earlier this month, I was a Power Panelist on Current TV and the host asked: “Why do Republicans hate American companies, such as Chevy and its Volt?” I responded by explaining how President Obama ignores and hurts American companies (think tech companies like Apple and any American company that produces “clean-tech”).

Obama says he supports American clean-tech. Correction: Obama keeps clean-tech unaffordable. You need rare-earth elements to create solar panels, wind turbines and electric batteries for cars like the Chevy Volt. But President Obama keeps the EPA in business. And environmental regulations like those coming out of the EPA put the former world leader in rare-earth production, California’s Molycorp mine, out of business years ago. It is the government’s fault that we stopped producing rare-earths at Molycorp, which is just now chugging back to life under stiff environmental standards.

Today, China produces roughly 97 percent of the world’s rare-earth supply and controls prices, charging $130 a pound for elements like dysprosium. It’s hard to blame China for mining its own resources and wielding its market advantage.

For over three years, Obama did nothing to revitalize America’s rare-earth market. He could have eliminated the unconstitutional EPA. Instead, he made the EPA stronger.

Now that gas prices are skyrocketing because Obama won’t drill for oil and his alternative solution, clean-tech, costs too much, Obama needs a scapegoat. On March 13, Obama filed a legal case on behalf of the United States “against the Chinese government over its reported hoarding of rare earth metals used to manufacture an array of sophisticated products,” reports The New York Times.

Obama says: “We want our companies right here in America. But to do that, American manufacturers need to have access to rare earth materials.” Please stop blaming China, Mr. President. China has no obligation to provide us with rare-earths at a certain price. You are to blame for the rare-earth shortage in America. You expect Americans to give up cheap gas and the safety of SUVs for an expensive and risky clean technology like the Volt, which blew up in flames after government crash tests.

94 percent of Americans love Canada, reports Gallup. Unlike most Americans and President Ronald Reagan, who had a thriving relationship with Canada’s Prime Minister, Obama is ostensibly one of the four percent of Americans who dislike our friendly northern neighbor. And, as one of my Twitter followers quipped, this makes Obama a “four-percenter.”

4.) Obama keeps his “boot on the throat” of big oil

Obama keeps telling us that drilling is up. Drilling is only up if the definition of “up” is “down.” If you want dates, I wrote a column with a detailed timeline showing how Obama has kept American oil production down.

Furthermore, Elizabeth MacDonald of Fox Business News reported on March 16 that up to 20 percent of the price you pay per gallon of gasoline goes toward state and federal taxes. So, Obama has the power to slash the price of gas by pressuring Congress to eliminate federal gas taxes.

Obama loves to blame oil speculators for high gas prices. He should blame himself.

Earlier in his term, Obama created a special task force to "investigate" possible market manipulation of oil prices. But, blaming Wall Street and capitalists for rising gas prices is a political move. The New York Times points out: "…most energy experts see no support for that theory. They point out that traditional market forces, like growing demand from emerging countries, and limited growth in oil supplies, can easily account for the increase in prices."

Furthermore, there is significant uncertainty in the market and uncertainty drives speculators to bump up the cost of oil. Global unrest in the oil-rich Middle East and anemic production in stable countries like the U.S. force traders to build a '"fear premium" of $15 to $20 per barrel…into the price of oil to account for further disruptions…,' reports the Associated Press.

Businessweek explains: “Credit Suisse estimates that each 1¢ uptick in a gallon of gas redirects $1 billion of consumer spending away from other goods over the course of a year. Retail sales in 2012 will probably total $4.8 trillion; so a 50¢ jump would siphon away more than 1 percent of those dollars—$50 billion…” that could be spent otherwise in the economy.

Get ready to watch Obama kiss $50 billion away from the U.S. economy. The New York Times reports that: “gas prices could rise another 50 cents a gallon or more, analysts say, if the diplomatic and economic standoff over Iran’s nuclear ambitions escalates into military conflict or there is some other major supply disruption.”

Obama is fanning tensions in the Middle East. More Americans than ever before are dying at the hands of trusted Afghans, not the Taliban. And Afghan President Hamid Karzai, our purported ally in the War in Afghanistan, wants us to leave by 2013. Yet, Obama seems to think he’s the President of Afghanistan and he is hell-bent on keeping our brave men and women in danger until 2014.

Iran controls nearly one-fifth of the world’s oil supply through the Strait of Hormuz. Despite the fact that American intelligence agencies have found zero evidence that Iran is working on building a nuclear weapon, Obama led the West in placing harsh economic sanctions on Iran.

On February 20, oil prices broke $105 a barrel, a nine-month high, because Iran cut exports to France and Britain. Iran perceives American economic sanctions as an act of war and economic sanctions have hurt global prices because they have increased market uncertainty.

Today, the world draws about 35 percent of its oil from North Africa and the Middle East. So, bringing our troops home from the Middle East, approaching Iran more diplomatically and dramatically accelerating U.S. production could help reduce the world’s dependency on oil from high-tension zones, thereby reducing market uncertainty and lowering gas prices.

Obama is neither a businessman nor a constitutionalist. He doesn’t understand that socialism makes clean-tech like wind, solar and electric unaffordable. He won’t drill for American oil. He thinks it is fine to use taxpayer money to reward his friends. He stirs Middle Eastern unrest and contributes to market uncertainty. Ultimately, he is responsible for high gas prices. No wonder the late Apple co-founder Steve Jobs warned Obama: “You’re heading toward a one-term presidency.”