Big Labor Seeks Bailouts At the Expense of Americans 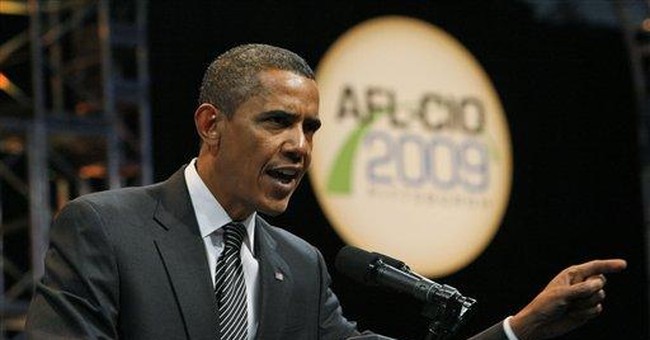 There seems to be no limit to how far union bosses will go in demanding political payback for supporting President Obama’s election campaign. In the airline industry, they are demanding that the new administration rewrite the election process, imposing new labor-friendly rules that have been rejected by four previous administrations, both Republican and Democratic.

Airline union elections are governed by the Railway Labor Act (RLA). It is quite different than the National Labor Relations Act (NLRA), which covers unions in other industries. Contracts under the RLA are national in scope and require a majority of a workgroup to vote in a union. This reflects a long-held belief that a union can only be effective if it has the support of the majority of the employees and the fact that airlines and railroads are critical to moving U.S. commerce. A few other important facts about the RLA – there is no formal decertification process, which means it’s nearly impossible for a union to be voted out even if workers change their mind about being unionized. Workers covered by the RLA are also exempt from state right to work laws.

On September 2, 2009, the Association of Flight Attendants (AFA), International Association of Machinists (IAM) and other unions asked the National Mediation Board (NMB), which oversees RLA elections, to change the traditional majority rules voting process to a minority rule voting process – allowing the will of a small group of employees to dictate the fate of the entire workgroup. What does this mean? Instead of requiring a majority of employees to vote for union representation, a majority of only those voting in the election would be required. This would in essence assume that anyone not casting a ballot is, in fact, in favor of union representation.

Of course, they didn’t ask for other changes, like creating a decertification process or allowing workers to opt out of their union dues. They want to make it easier to unionize, and leave workers with the same near-impossibility of ever voting the union out. Doesn’t sound fair, does it?

Even previous Democratic administrations didn’t think such a rule change would be fair. The current majority rules voting process has been in place for 75 years, and has been applied and reaffirmed unanimously by the NMB, through every administration since Franklin Delano Roosevelt and it has been maintained even though four previous requests have been made to change the process. It’s certainly not an anti-union process – unions have won 65 percent of the more than 1,850 elections since 1934. But somehow those winning odds aren’t good enough – the unions want to stack the deck in their favor.

The last request was made by the AFA and rejected by the NMB just 20 months ago. So, what’s changed in 20 months? A new labor supporter appointee to the NMB – Linda Puchala – conveniently also the former President of the AFA – was confirmed on May 22, 2009. Shortly after Puchala’s appointment, the AFA and the IAM filed with the NMB for representation elections at Delta. Dying to get their hands on potential union dues from 50,000 Delta/Northwest Employees, the unions requested a change to the minority-rules process just weeks later.

Delta and Northwest merged a year ago this week, but under the current rules, the AFA does not believe they can win an election on union representation, so thousands of employees continue to wait to express their views on union representation. The NMB has taken no action in the almost three months since the AFA first filed its application to represent workers of the new Delta. So why is the new NMB ignoring the situation? It’s not clear, since they’ve authorized elections at other airlines according to the current rules.

Union bosses continue to play the “payback” card, looking for every possible opportunity to force workers into labor unions – even against their will. Whether it’s the elimination of the secret ballot and binding arbitration provision found in the Employee ‘Forced’ Choice Act, business-hostile appointees such as Craig Becker to the National Labor Relations Board, “quickie” union elections to prohibit workers from knowing all the facts before casting a vote, or minority rule in airline elections, it all means one thing: a massive bailout for Big Labor at the expense of our freedom. And the American people have a right to know about it.