Perspective on the Pope

Kathryn Lopez
|
Posted: Oct 25, 2020 12:01 AM
Share   Tweet
The opinions expressed by columnists are their own and do not necessarily represent the views of Townhall.com. 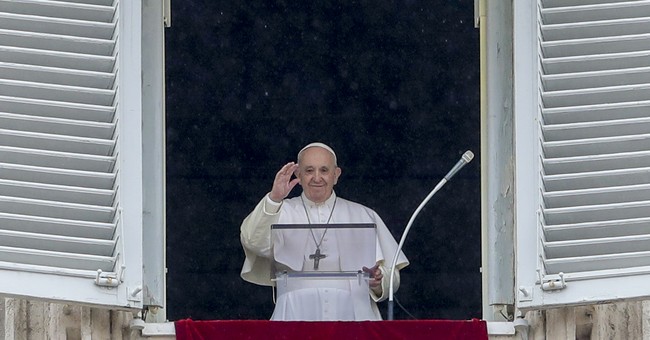 A new Pope Francis documentary, "Francesco," has certainly commanded some attention. Longtime pope followers like me know to take the hubbub with a grain of salt. The press attention to Francis' papacy has been so often guided by ideology. The progressive left, so to speak has held onto hope that he is their way to a church they are more comfortable with, one conformed to the values of the times rather than age-old tenets. That's not to absolve people on the right, of course, some of whom miss the best of Francis because of the politicized lens through which everything is seen these days.

The documentary was released the same week as the annual feast day of St. John Paul II, canonized a saint by Pope Francis. In his first encyclical, JPII said that "Man cannot live without love. He remains a being that is incomprehensible for himself, his life is senseless, if love is not revealed to him, if he does not encounter love, if he does not experience it and make it his own, if he does not participate intimately in it. This, as has already been said, is why Christ the Redeemer 'fully reveals man to himself.'

These days, I confess to taking some consolation in people who declare themselves politically homeless. They are often voicing a desire to see politics shaped into something that reflects the best of ourselves when it sometimes seems to reflect the worst. During the last presidential debate, I watched as NARAL Pro-Choice America, the organization that was formerly known as the National Abortion Rights Action League, tweeted against Donald Trump for separating illegal immigrant children from families. Yes, that is not good. Nor is what NARAL is about: Violently, permanently pitting a mother against her unborn child. I know we are not supposed to put it that way in polite society, but that is what it is. And that is why I increasingly know people who are voting for neither major candidate this presidential election.

When I was a child, if you asked me what my favorite holiday was, it was Election Day. Never could I have imagined that politics could have come to our current miserable situation. And yet, my friend and colleague Richard Brookhiser, who writes some of the best history books, is forever reminding us that politics has been replete with dark moments. We just didn't have to watch them play out on social media.

If you were upset or celebrating or something in between after reading the headlines about Pope Francis, maybe take a look at some of his writings. Maybe take a look at "Christ in the Storm: An Extraordinary Blessing for a Suffering World." We are a people in search of something greater than this moment, and something greater does exist. That's the most important aspect of Pope Francis -- he's a believer, and he wants you to be one too. Conversion is a process, and he will start where there might be an opening. And this is where our hope lies in turning things around in our suffering world.

Pope Francis tends not to get headlines when he says that "Humanae Vitae" -- the infamous encyclical from Paul VI that warned about what the contraceptive pill would do to men, women and sex -- was prophetic. He's not the pope of the left or the right; his revolution is based on nothing but love. There's a great treasury for humanity in the catechism of the Catholic Church. Pope Francis is inviting us all to take part.