Wind Down Instead of Winding Up

Kathryn Lopez
|
Posted: Nov 23, 2019 12:01 AM
Share   Tweet
The opinions expressed by columnists are their own and do not necessarily represent the views of Townhall.com. 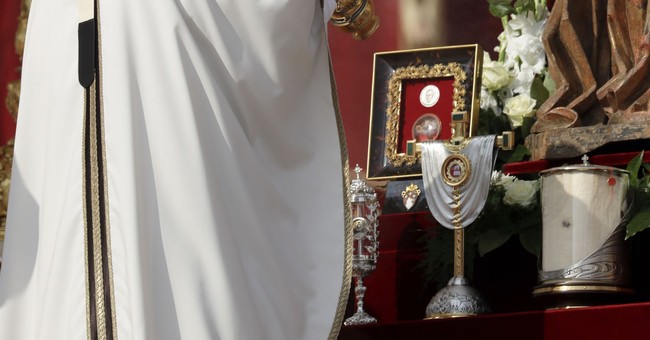 "Discouragement is a form of pride; sadness is often caused by our egotism." That sort of leaped off the page as I was recently doing a little reading of the work of the late Archbishop Fulton J. Sheen, to mark the news that before the year is through, he will have made a big step toward being an official saint of the Catholic Church. The sentence was the linguistic equivalent of a five-alarm fire, to be perfectly honest, not just for our current culture but for my life.

As you might be aware, there was a protracted court battle involving Archbishop Sheen's remains between his hometown diocese of Peoria, Illinois, and my hometown of New York, where he served in the role for which he is most well-known. Sheen was a communicator -- on prime-time television, at that medium's beginning -- of the faith to the world. And I was downright sad about the move of his remains earlier this year to the Midwest. Saint Patrick's Cathedral, where he served and where his remains had been, happens to have the closest tabernacle to my office at National Review's headquarters in midtown Manhattan. And rarely would I be in that church without praying above his remains -- for his canonization, and for his help. Reading Sheen's words about pride made me realize my own pride -- my native pride had certainly been stung by the move to Peoria.

Why do we constantly cling to things of this world instead of thinking about the next? While I do think more people might be impacted by having Sheen's earthly remains just steps from Rockefeller Center, what do I know? God has some kind of plan here. And God doesn't want us to be sad or discouraged. He wants us to be living the fullest freedom in His wisdom.

Writing about happiness, Sheen goes on to say: "If you will whatever God wills, you will always have exactly what you want. When you want anything else, you are not happy before you get it, and when you do get it, you do not want it. That is why you are 'up' today and 'down' tomorrow."

This is relevant especially during this time of year, and it's why the timing of the Sheen beatification probably couldn't be better. The holiday season tends to be hectic. But it should be reflective. It should be a time of self-examination and the giving not of material gifts but of more of our hearts. Sheen can help.

Here's Sheen's advice for making adjustments to how you think and live: "You will never be happy if your happiness depends on getting solely what you want. Change the focus. Get a new center. Will what God wills, and your joy no man shall take from you." Be not afraid, in other words.

And how's this for a mantra for change? "It is not so much what happens in life that matters; it is rather how we react to it." In his chapter on hope in a book reissued in the last year under the title "Remade for Happiness," Sheen writes: "You can always tell the character of a person by the size of the things that make him mad. Because modern man lives in a world that has reference to nothing but itself, it follows that when depression, war, and death enter into his two-dimensional world, he tumbles into the most hopeless despair." Talk about another apt comment for our lives in this time -- it routinely takes but a tweet to get us worked up and angry.

Finally, I think this is key for us today, and it needs to be heard and digested, made a part of our lives: "There is another way out than suicide, frustration, and anonymity, and that is the way of hope, not natural hope, but supernatural hope that settles your soul in God, and directs your will toward Him. And for that to happen, you need to pause, you need to reflect, you need some silence in your life. Fight for a little silence. Fight for time for meditation and prayer. Give God some exclusive time and you may be pleasantly surprised how it changes your life. How it, indeed, settles your soul."

Fulton Sheen should be most well-known for his devotion to a carving out a daily hour for divine contemplation. A little time every day with God, even simply communicating with him at a quiet spot at home or work or anywhere in the world. That could be the greatest gift you give yourself and everyone in your life as we wind down the year.