Easter Abroad And At Home 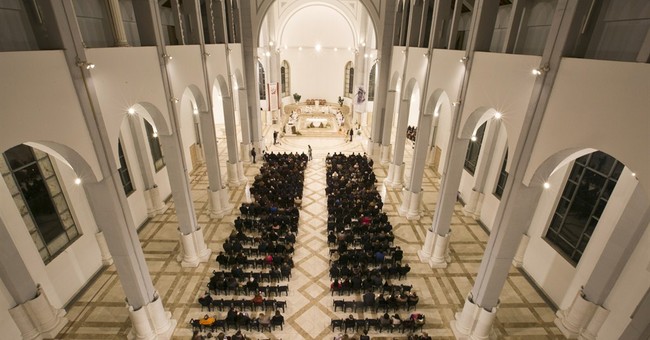 "ISIS is an army of the devil," Father Dankbar Issa, a Chaldean monk, tells the charity group Aid to the Church in Need. "There is no other explanation for what they are doing to people," he said just after Palm Sunday Mass.

He and his fellow monks fled their monastery of St. George last summer.

While Father Issa worries deeply about the prospects of the children and their families who have been forced from their homes by the Islamic terrorist group, he does not bemoan their lot and is not bitter. "We Christians were baptized into the suffering of our Lord. So persecution is something we have to expect," he told the crowd. "We know that Easter, which means life, will be victorious. It gives us hope in spite of all the difficulties."

Archbishop Bashar Warda of the city of Erbil in Iraq's Kurdistan region reports to Aid in the Church in Need that he sees Christian families leaving Iraq every day, even as "the humanitarian situation has since stabilized," allowing relief efforts to focus on proper schools and accommodations for those who fled their homes on account of ISIS.

Alejandro Bermudez, a Peruvian-born journalist who runs the Spanish language ACI Prensa and Catholic News Agency, went over to Iraq to be with the persecuted for Easter. There he found Christians helping others whose lives have been irrevocably changed by the terror of ISIS. About 450,000 Yazidi -- a small religious minority that ISIS considers devil worshipers -- are described as "the poorest of the poor" by a Shelan Jibrael, a Christian Iraqi who works with a Japanese NGO. They have "nothing and nobody," she says.

They do have Jibrael, who is committed to caring for the meek and the persecuted. And they need her. Bermudez told the story of a girl named Elmyra, a 9-year-old from Kurdistan, who told him: "My daddy is alive, not like the other children that have lost their father; but my brother is sick". Her older brother, who is 11, is suffering from the post-traumatic stress effects of the violence, and also needs an operation to correct a problem with his eyes.

Jibrael intends to enlist the aid of Slovakian doctors who have set up a clinic nearby. Dr. Zuzana Dudova observes the few practical options available to the many displaced Christians: "The men try to find work so they can move into a single-family home, but there are few opportunities, and the lack of security makes going back impossible in the short term."

Meanwhile, on Easter Sunday in the United States, the morning press shows focused on the obvious news story of the day: Christ's resurrection. This meant some airtime given to clerics and religious reflection -- and with real palpable policy implications, as a frenzied debate surrounding religious freedom continues here at home, most notably in Indiana. The connection between Indiana and Iraq seemed lost on many.

While petty religious bickering divides us at home, the real meaning and value of Christianity is abundantly clear abroad, if only we were paying attention.

The Christians in Iraq and those who make pilgrimages there remind us of Jesus' love, suffering and sacrifice, and our duty to imitate all three. That is not to make us feel good, but an invitation to truly know God, and live as the Gospels say; it is a challenging way and not one for comfortable categories that keep us ideologically secure.

Christians fleeing their homes and flocking to help the displaced show us the radical call of the love that was demonstrated on the Cross, the whole point of Holy Week. They show us Christian hope. They live Easter every day.