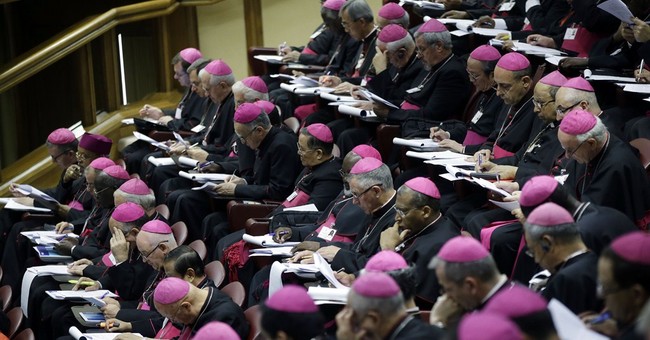 Trending
"The transmission of human life is a most serious role in which married people collaborate freely and responsibly with God the Creator. It has always been a source of great joy to them, even though it sometimes entails many difficulties and hardships."

The words of Paul VI are like the background music for the Extraordinary Synod on the Family that is wrapping up in Rome.

The opening words of the 1968 encyclical "Humanae Vitae" continue: "The fulfillment of this duty has always posed problems to the conscience of married people, but the recent course of human society and the concomitant changes have provoked new questions. The Church cannot ignore these questions, for they concern matters intimately connected with the life and happiness of human beings."

New questions, indeed! They abound today. Questions about the very definition of marriage; about pervasive and destructive pornography; about the ethics of assisted reproduction. And about the effects all of these are having on how we view ourselves in relation to those closest to us.

Prophetically, "Humanae Vitae" warned that it is "cause for alarm ... that a man who grows accustomed to the use of contraceptive methods may forget the reverence due to a woman, and, disregarding her physical and emotional equilibrium, reduce her to being a mere instrument for the satisfaction of his own desires, no longer considering her as his partner whom he should surround with care and affection."

Remarkably, the same church that sounded that alarm is now maligned as waging a "war on women." But of course, not everyone in the church stood with Paul VI. Dissent added to the fog of recent decades, where expectations changed as lives were ordered around the existence of the pill and abortion.

Today, birth and marriage rates are in decline. Wounds abound. For the sake of not only Catholic families, but also the health of the whole world, Pope Francis convened this synod to consider the fallout and how best to help. How to encounter people where they are and accompany them to something better -- that is, set them on the self-sacrificial, radical, redeeming path of Christ. The meeting in Rome was only the beginning of an ongoing process that will include the pope's expected visit to Philadelphia and other cities next fall, and another meeting in Rome next year.

Of course, that may not be what you heard about the Rome gathering. When a working draft of a document was released by the Vatican press office, Al Sharpton explained that, "A new Vatican document released by Pope Francis is calling for the Church to have a more compassionate attitude toward gays."

Conspicuously missing from most of the news coverage was that the document -- incomplete though it was, having since gone through revisions and corrections -- directly cited and reaffirmed "Humanae Vitae." And the fact that the synod was culminating in Pope Francis beatifying its author -- a step on the road to sainthood.

Self-professed Catholics have gotten caught up in the confusing, exhilarating and disruptive winds of the sexual revolution in recent decades. At this synod, rather than an upending of church teachings, there was a resetting.

Before reporting all kinds of wild things that weren't happening, most media and commentary noticed a changed tone in the document. The synod was not changing doctrine, but it was seeking to find pastoral solutions to challenges facing good people who want to live good lives. What was on display was a draft deliberately marinated in an accessible language of mercy and encounter, words Pope Francis often uses.

We live at a time where talk of truth beyond what any one person wills is quickly condemned as intolerant and intolerable. But that very environment aches for the active engagement of loving and confident witnesses to the merciful love of Christianity.

Among those witnesses are Ron and Mavis Pirola, an Australian couple who participated in the synod. In an interview, they said that church teachings are often only known as a "no" or a "yes." What people need to hear, they said, is the "beautiful truth -- the 'whys' behind the 'whats.'"

The task of communicating the "whys" and the "whats," and reaching people with the healing remedies for an aching culture, is what the Church has set out to do. And that's much more exciting than the ideological expectations so many have recently gotten caught up in.

There's an attainable joy found in the truth, beauty and goodness of the marriage between a man and a woman who are open to children. It can be renewing for friends and family, for communities and institutions, for a country and a culture. Making that case in the most practical -- and not just polemic, legal and political -- ways could just be what the world needs right now.