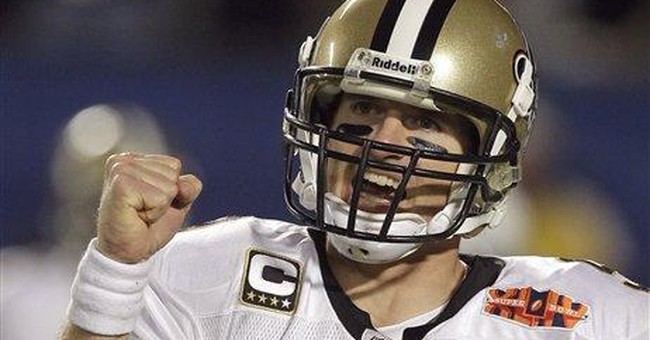 "Don't you live for that moment right there?"

That's how Super Bowl XLIV ended, with former NFL quarterback Boomer Esiason commenting on the scene of the night: the MVP, Saints quarterback Drew Brees, holding his young son in his arms, and with his wife looking on, sharing a momentous personal, cultural and historic moment with his family.

It's an image America needed. "Given that about one-in-four American boys are living apart from their dads at any one point in time, it is great to see a Super Bowl champion with his wife and son, and to see that this win is all the bigger for him for being shared with his son," Brad Wilcox, director of the National Marriage Project and associate professor of sociology at the University of Virginia, tells me.

Elizabeth Marquardt, author of "Between Two Worlds: The Inner Lives of Children of Divorce," and director of the Center for Marriage and Families at the Institute for American Values, isn't a football follower, but she liked what she saw on the field. Marquardt noticed "how physically familiar" Brees and his son seemed with each other. "It bespoke an intimacy of real time spent together." She adds: "Even in a football stadium of screaming fans the toddler boy didn't look anxious. He knew he was safe. He was with dad."

The image is all the more beautiful if you realize that Brees, who joined the New Orleans Saints in 2006, has said that he and his wife believe that they were called to New Orleans, and have raised money for and been a part of the post-Katrina reconstruction. Clearly, Brees takes the name of the team he leads seriously.

Shortly after the Saints' victory, New Orleans native and pro-life attorney at the Bioethics Defense Fund Dorinda Bordlee set up "The Baby Brees Respect Life Fan Club" on Facebook in gratitude for the image. "The heart-melting photo of Drew Brees lifting his baby boy into the air conveyed that the gift of human life and love is even more valuable than lifting the Lombardi Super Bowl trophy. And that's saying quite a bit," noted Bordlee, a long-suffering Saints fan. She's most moved by the men who have subsequently posted on her page. She points to one who wrote: "This picture is just great! It sends a beautiful message to all men that family is the most important thing we all have." Another posted, directing his note to Brees: "Thanks for being the kind of athlete/role model my 9 & 11 year old boys need! They love the game, but also realize God and respect for life is so much bigger . . . you just proved it!"

"There is something so beautiful about seeing a father, at the height of his professional career, with the whole world cheering him, blocking all that out to share that moment with his son," Raymond Arroyo, a news anchor for the Catholic television network EWTN, himself a New Orleans native and father of sons, tells me. "One can imagine what that boy will think years from now when he sees himself with those ear protectors, in his father's arms at the end of the Super Bowl."

And in surveying reactions to the winning image, I note: Men tend to focus more often than not on the son. Jerome Ritcher observes: "From the perspective of the son there are fewer things than to be held and loved by your father, so if I was to use that picture of Brees with his son I would relate it from the perspective of the son. Every man was once a son and they all want to be approved by their father and Brees is giving this to his son by showing he is most important in his life." Besides being a son, husband, father, and football man, Richter, a Catholic high-school teacher in Bismarck, N.D., runs Knights of Virtue, a group for teenage boys focused on living virtuously, mastering passions, and being a hero in the world where they live.

Back in 1996, the late sociologist Elizabeth Fox-Genovese wrote in National Review that "fatherhood -- good fatherhood -- grounds the well-being of children; its absence painfully cripples them and all of us. Whatever we may like to believe, neither mothers alone nor the village can substitute, and the personal failings of individual men inescapably result in 'a major public crisis.'"

Fatherhood still may be in a state of crisis, but we're fighting for it, one devoted dad at a time. And Drew Brees is the latest poster boy. Like all of us, he's only human, but there's great virtue in both bucking him up and celebrating the beautiful Super Bowl moment that he shared with his wife, son and all of us. No paid ad time. No controversy. Only love.