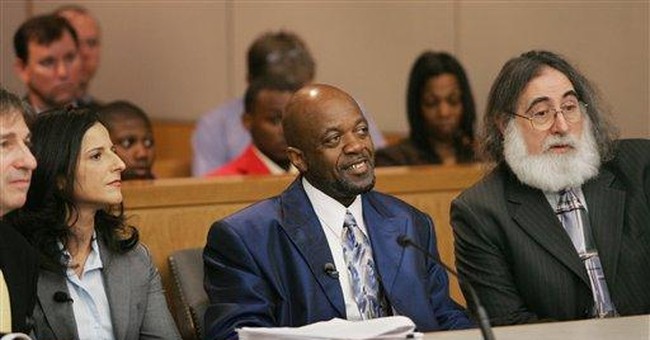 116. That's about how many prisoners in America's jails are raped every day, according to a new report.

Alarmingly, "More prisoners reported abuse by staff than abuse by other prisoners," says Pat Nolan, vice chairman of Prison Fellowship, an organization that ministers to convicts. Nolan calls it a "total abuse of authority" that's also an indicator of a "breakdown of the system" -- a system that purports to be based on the principle of justice.

This issue won't inspire marches on Washington, and it's not new. But a coordinated effort to change the corrections culture is something novel, and very overdue. A study issued by a bipartisan panel established by the Prison Rape Elimination Act of 2003 aims to do just that, investigating "the prevention, detection, response and monitoring of sexual abuse in correction and detention facilities in the United States."

And why did this need to be done? The results speak for themselves. "Too often in what should be secure environments, men, women and children are raped or abused by other incarcerated individuals and corrections staff," the report found.

Nolan, who served on the commission and has spent time inside prisons providing religious guidance to convicts, calls what happens in the facilities "astounding." He cautions that the report "significantly understates" the problem, because it relied so much on self-policing and recording.

The good news, for the sake of human dignity and the health of society, is that in Nolan's wide experience, Americans are compassionate. The topic is unsavory, which is why it likely won't start a large public groundswell. But, Nolan observes, most people assume that no one gets away with rape, a blatantly illegal act, in the hyper-controlled environment of prison. Once they realize that prison life regularly involves facing the corruption, abuse or wholesale failure of authority, people quickly express outrage. Further, Nolan says, people understand what this has to do with stabilization, rehabilitation and common sense. Having had his dignity debased behind bars, a released inmate is rejoining civil society with all kinds of uncivil thoughts, bitter and angry at the horrors inflicted on him not just by his rapists, but also by the justice system that overlooked the criminal acts happening under its nose.

So what is to be done?

The passage of the prison rape law six years ago provided a catalyst for a change in corrections leadership. The panel formed by that act, having looked at what works and doesn't work, what's going right and devastatingly wrong, came up with standards for detection, prevention, reduction and punishment of rape in our prisons and other corrections and detention facilities. And though there is a federal law on the books, and the study was national in scope, Nolan believes that the prison culture must change on the local level, from the ground up. Ask your local newspaper to look into the conditions in nearby prisons. Urge your state officials to implement the National Prison Rape Elimination Commission standards. Make sure people at your place of worship or in your social circles know this is happening.

Churches have played no small role in the disinfecting process already. These dark crimes came out of the shadows when churches got involved, Nolan emphasizes. "Churches made it a moral issue," Nolan remembers. "In a civilized society we cannot allow this to go on."

No criminal, no matter how heinous his crime, deserves dehumanizing humiliation. Nolan, the commission, and Prison Fellowship are, of course, about law and order. But justice must be just, and there has to be more; society must offer support for its present and former convicts. Prisoners need "hope and a helping hand," Nolan asserts. And the most rewarding aspect of his work, he says, is that despite disappointments, "so many respond" to such "love." "They are eager to change their lives. They are desperate to break out of the cycle that's put them in this shameful place they are in, physically and psychologically." The introduction of love and accountability into prisoners' lives can be a breakthrough, he says.

Violence requires a vigilant response. Whether it's perpetrated against someone who's never jaywalked, a burglar or a homicidal criminal, no one deserves to be raped. And justice requires better guardians than those who would overlook violence against fellow citizens, however unsavory. With "change" as the buzzword du jour, a change geared toward dignity and redemption deserves a fair shake; it's also a worthy investment. As the commission reports, "More than 7.3 million Americans are confined in U.S. correctional facilities or supervised in the community, at a cost of more than $68 billion annually."

Loving your enemies and your neighbor as yourself is pretty audacious, too. Doing anything else would be cruel, if not unusual.