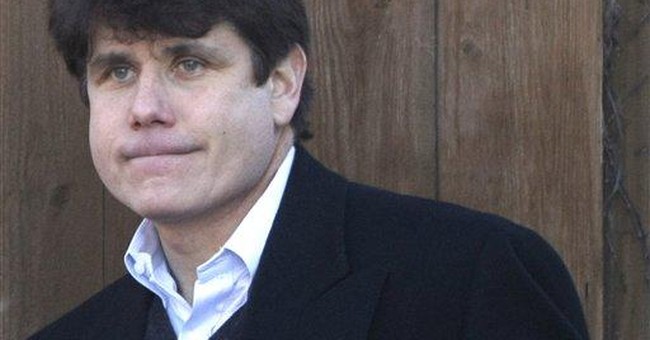 In the hours after the news broke that Illinois Gov. Rod Blagojevich had been carted off for allegedly working to sell Barack Obama's Senate seat, I voiced my relief: At last, an old-fashioned political scandal. I wrote: "This Illinois Senate-seat news is outrageous and shameful. That said, it warms my heart. Finally, a political scandal you can talk to your children about. No room at the Mayflower. No MySpace page. No gay-American announcement. Just good and evil and money and power corrupting."

Sure, the words that emerged in the complaint filed against the beleaguered governor were bleeping nowhere near PG, but at least the headline this time wasn't all about sex. The abandoned Obama Senate seat "is a f-ing valuable thing, you just don't give it away for nothing," Blagojevich asserted. "I'm going to keep this Senate option for me a real possibility, you know, and therefore I can drive a hard bargain. You hear what I'm saying. And if I don't get what I want and I'm not satisfied with it, then I'll just take the Senate seat myself."

In his profane and selfish ranting, Blagojevich provides the perfect example of a keeper of the public trust whose sense of responsibility has utterly absquatulated. Power corrupts, especially in Illinois, it would seem, where, even Chicago residents will admit, jail is beginning to look like a rite of passage for the state's governors (this, boys and girls, is what we mean by "Chicago politics").

A hat tip to the Web site www.lifesitenews.com, without which I would not have known about this gem: "In 2005 the governor issued an executive order forcing all pharmacists in the state to fill prescriptions for the abortifacient morning after pill. He boasted in a 2006 interview, 'Rather than try to get the legislature to pass something -- because we attempted to and they didn't do it -- on my own, through executive order action, I forced these guys to fill prescriptions for birth control for women who come in with prescriptions from their doctors.'"

In another interview, he would boast, "Think about what we've been able to do since I've been governor. The reproductive freedoms of women are more protected in Illinois than any state in America. That's in (stark) contrast to the advances and assaults coming from the Bush administration of Washington. We passed a law under my leadership to make insurance companies fill female contraceptives. Illinois had never done that before and we passed that law."

How's that for leadership to be proud of? This is a case of government compulsion on an issue that should not be taken lightly by public officials: freedom of conscience concerning matters that many Americans -- including some pharmacists -- consider life and death.

Merriam-Webster defines conscience as "the sense ... of the moral goodness or blameworthiness of one's own conduct, intentions or character together with a feeling of obligation to do right or be good." Not only did Blagojevich cast aside any such sense in his operations as governor and his maneuvering for increased power, he also sought to deprive others of their right to live according to their own established ethical codes.

The pharmacist issue foreshadows a debate that, if President-elect Obama is true to his word, will soon rise on a national level. Obama has promised that the Freedom of Choice Act will be one of his first legislative priorities after assuming the presidency. The FOCA would lift all restrictions on abortion in America. This means that states where governors did allow their legislatures to keep pharmacists and hospitals free from mandated abortion-assistance will be overruled by a federal conscience interruptus.

There are obvious takeaways from the Blagojevich scandal that pols were quick to pick up on. For one: distance yourself from these crimes. The Democratic Party has been smart about that -- Obama and all of the Senate Democrats didn't take too much time before they called on Blagojevich to resign from office. But there are more lessons to learn, ones not so obvious. Whether you're running for office, holding a public trust or simply voting -- politics are all about conscience. Being guided by it, protecting it and understanding it. Rod Blagojevich not only cast conscience aside, he ridiculed it, he trampled on it, and, worst of all, he thought he could live without it. He sang his anti-consciousness from the rooftops.

It's not just the crime, it's a matter of conscience.