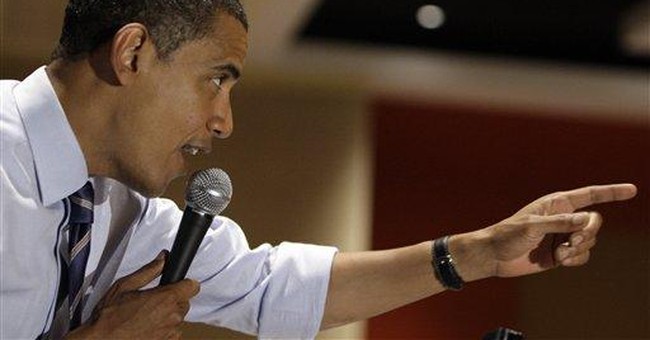 Speaking to a group of young Catholics in New York almost one month before Election Day, I had a harsh awakening as jarring as a shot of Wild Turkey 101. Weeks before going to the polling booth, Americans do not know Barack Obama.

In a packed bar, I was discussing the contentious question of whether a Catholic can support Obama for president. I highlighted the priority that defending innocent human lives takes in these considerations, according to the Church. I then went through Obama's radical record on abortion. The jolt came after I finished speaking, when one by one, people told me they had no idea Obama was so radical.

They were shocked. And so was I.

We've been understandably focused on the economy lately, so much so that it's as if there are no other issues. But there are. And in the time we have left, voters must consider them.

Though for Catholics, in the end, it's up to the individual, through prayer, to decide upon political matters, my conclusion is that it would be a very tough thing for a follower of the pope to back the senator -- impossible, actually. Obama has stood on the floor of the Illinois statehouse and argued that a baby born alive due to a botched abortion should not have the same rights as a child carried to term. That, in and of itself -- his opposition to Illinois' Born Alive Infants Protection Act, which sought to mandate safeguards for such unwanted children -- is a heavy obstacle to overcome for those Obama fans concerned about the future and dignity of human life. He defended infanticide. That alone would be enough to keep me from voting for him. But, as it happens, it's not the only ethical affront the Obama campaign has committed, and far from the only offense to human rights that the Democratic presidential candidate supports.

Care for some others?

Barack Obama has told the Planned Parenthood Action Fund that the first thing he will sign as president will be the Freedom of Choice Act, which will sweep away limits on abortion -- state and federal -- including restrictions on government funding of abortion and laws protecting anti-abortion health care providers.

Barack Obama opposes the Hyde Amendment, which restricts use of taxpayer dollars for supporting abortion.

Barack Obama believes that the right to have an abortion is a matter of equal rights for women.

Barack Obama does not support the Pregnant Women Support Act, a project of Democrats for Life, meant to reduce abortions by strengthening the social safety net. This is important because it exposes as a lie a major talking point employed by those who argue that pro-lifers can support Obama. It shows much of the left's patronizing rhetoric to be nothing but rank deceit. House Speaker Nancy Pelosi -- a Catholic who developed her own theology to justify her abortion support -- and Senate Majority Leader Harry Reid have not allowed this important act to even come to a vote.

I don't think I'm unreasonable in thinking that sweeping away all abortion limits and funding abortion with federal tax dollars (while defunding centers that provide alternatives to abortion) will increase rather than decrease abortions in the United States.

"The election of Barack Obama would endanger the lives of thousands of unborn children," University of Alabama professor Michael New tells me. "If he follows through on his pledge to sign the Freedom of Choice Act, it would likely nullify many state-level pro-life laws that the pro-life movement has worked hard to enact."

Calculations from the results of a 2004 Heritage Foundation study, authored by New, indicate that the repeal of all state-level public funding restrictions, parental-involvement laws and informed-consent laws would result in 125,000 more abortions every year. The repeal of federal pro-life laws might well push the numbers up even higher.

You can fall in love with the romantic idea of a black man becoming president of the United States, but in a country where black women have abortions at five times the rate of white women, he is a profile in cowardice. In a land where we have devoted ourselves to the pursuit of life, this is unacceptable. Vote as if lives depend on you.