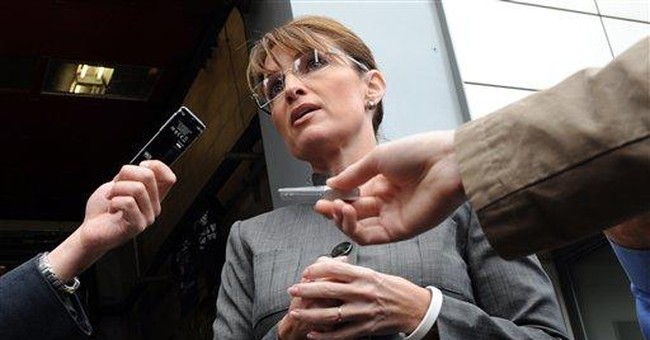 WASHINGTON -- If at one time women were considered heretical for swimming upstream against feminist orthodoxy, they now face condemnation for swimming downstream -- away from Sarah Palin.

To express reservations about her qualifications to be vice president -- and possibly president -- is to risk being labeled anti-woman.

Or, as I am guilty of charging her early critics, supporting only a certain kind of woman.

Some of the passionately feminist critics of Palin who attacked her personally deserved some of the backlash they received. But circumstances have changed since Palin was introduced as just a hockey mom with lipstick -- what a difference a financial crisis makes -- and a more complicated picture has emerged.

As we've seen and heard more from John McCain's running mate, it is increasingly clear that Palin is a problem. Quick study or not, she doesn't know enough about economics and foreign policy to make Americans comfortable with a President Palin should conditions warrant her promotion.

Yes, she recently met and turned several heads of state as the United Nations General Assembly convened in New York. She was gracious, charming and disarming. Men swooned. Pakistan's president wanted to hug her. (Perhaps Osama bin Laden is dying to meet her?)

And, yes, she has common sense, something we value. And she's had executive experience as a mayor and a governor, though of relatively small constituencies (about 6,000 and 680,000, respectively).

Finally, Palin's narrative is fun, inspiring and all-American in that frontier way we seem to admire. When Palin first emerged as John McCain's running mate, I confess I was delighted. She was the antithesis and nemesis of the hirsute, Birkenstock-wearing sisterhood -- a refreshing feminist of a different order who personified the modern successful working mother.

Palin didn't make a mess cracking the glass ceiling. She simply glided through it.

It was fun while it lasted.

Palin's recent interviews with Charles Gibson, Sean Hannity and now Katie Couric have all revealed an attractive, earnest, confident candidate. Who Is Clearly Out Of Her League.

No one hates saying that more than I do. Like so many women, I've been pulling for Palin, wishing her the best, hoping she will perform brilliantly. I've also noticed that I watch her interviews with the held breath of an anxious parent, my finger poised over the mute button in case it gets too painful. Unfortunately, it often does. My cringe reflex is exhausted.

Palin filibusters. She repeats words, filling space with deadwood. Cut the verbiage and there's not much content there. Here's but one example of many from her interview with Hannity:

"Well, there is a danger in allowing some obsessive partisanship to get into the issue that we're talking about today. And that's something that John McCain, too, his track record, proving that he can work both sides of the aisle, he can surpass the partisanship that must be surpassed to deal with an issue like this."

When Couric pointed to polls showing that the financial crisis had boosted Obama's numbers, Palin blustered wordily: "I'm not looking at poll numbers. What I think Americans at the end of the day are going to be able to go back and look at track records and see who's more apt to be talking about solutions and wishing for and hoping for solutions for some opportunity to change, and who's actually done it?"

If BS were currency, Palin could bail out Wall Street herself.

If Palin were a man, we'd all be guffawing, just as we do every time Joe Biden tickles the back of his throat with his toes. But because she's a woman -- and the first ever on a Republican presidential ticket -- we are reluctant to say what is painfully true.

McCain can't repudiate his choice for running mate. He not only risks the wrath of the GOP's unforgiving base, but he invites others to second-guess his executive decision-making ability. Barack Obama faces the same problem with Biden.

Only Palin can save McCain, her party and the country she loves. She can bow out for personal reasons, perhaps because she wants to spend more time with her newborn. No one would criticize a mother who puts her family first.

Do it for your country.