McCain: The Best or the Wurst of Times? 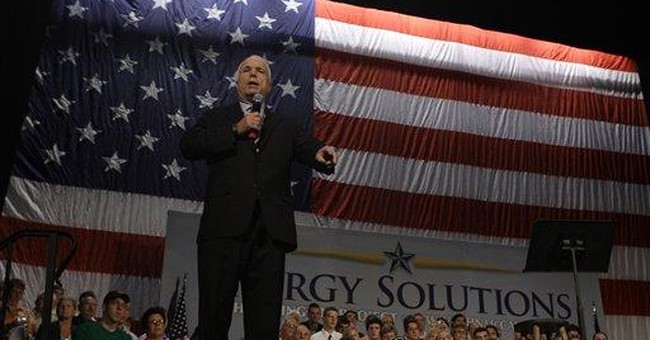 In McCain's universe, the planets rotate around the sun in a predictable pattern. In Obama's universe, he is the sun -- and we are but minor planets revolving around his brilliant countenance.

Rarely have the different orbits of these two men been more vivid than last week. While Obama was enacting the rapture before 200,000 worshipers in Berlin, McCain was grinding out economic policy with fellow earthlings at Schmidt's Restaurant and Sausage Haus in Columbus, Ohio. Its motto: "The Best of the Wurst!"

One is a Sun God -- a young deus ex machina who entered the national stage just four years ago; the other is an old soldier rendered witness to the shifting tides.

Yet, despite Obama's amazing miracle tour last week through the Middle East and Europe -- and despite McCain's recent missteps -- the veteran is still not losing to the novice. Why not?

Given Obama's star power and incredible political machinery, he should be doing even better than he is. Though he gained a few points in the polls following his Berlin speech -- and thanks in part to Iraqi Prime Minister Nouri al-Maliki's seeming endorsement of Obama's withdrawal plan -- a new Gallup/USA Today poll shows McCain leading by four points among likely voters.

The easiest explanation is McCain's familiarity against a relative newcomer. But another possible explanation may be more instinctual. Obama is too good to be true.

Like an "American Idol" winner, Obama seemed to spring from the wings a fully formed celebrity. He knows all the right moves but, like the young superstar, there's something missing. It's that intangible but palpable something that comes from paying dues.

"American Idol" winners are full of raw talent, but they're different than veteran performers who put in years showing up for auditions, suffering rejection and absorbing the humility that comes with it. When they finally land the lead role, they're prepared for it, but know better than to feel smug. They've earned it.

Being older and working longer don't necessarily make one better or more capable, obviously. Some people are blessed with greater talent, more intelligence, better looks. But Americans are skeptical of those who skip the line. Obama is like the guy who ignores the "merge ahead" sign, speeds along the outside lane past other drivers waiting their turn, and expects to be let in at the front.

Or so it feels sometimes.

When critics speak of Obama's youth and inexperience, that may be partly what they mean. Youth is lovely and inexperience isn't a character flaw. But Obama keeps sprinting ahead of himself. The presidential-looking seal on his podium was presumptuous. His overseas tour had the feel of a premature victory lap.

It was all a little too wonderful, a little too scripted, too managed and smacking of stagecraft. Everywhere he went, Obama was received as though he were the president, not the presumptive Democratic nominee.

Clearly, Obama's crowd-pleasing isn't viewed as a "problem," except to the McCain campaign. To team Obama, these are dreams come true, prayers answered, strategies ratified.

Yet to skeptical Americans -- those not quite ready to declare Obama commander in chief -- there's a deep-brain recoil in the presence of too much too soon. Adoring masses may inspire excitement, but they don't necessarily inspire confidence.

Where exactly does this pied piper lead?

That's the question with no clear answer. Obama's campaign plane features "CHANGE" in large black lettering, but change to what? A better world as one people? A world where the rise of oceans slows and the planet heals? A moment when we give hope to the world, jobs to the jobless, health to the sick, sight to the blind, mobility to the lame and life everlasting?

Amen to that, but how? And at what cost?

Obama may be easy on the eye and sonorous to the ear, but those qualities ultimately could hurt him among the less easily seduced. Come November, the more reassuring image in voters' minds may not be the charismatic figure preaching global unity to a mesmerized Berlin throng, but an old warrior hashing out less cosmic concerns among regular Americans in a German cafe in Columbus.