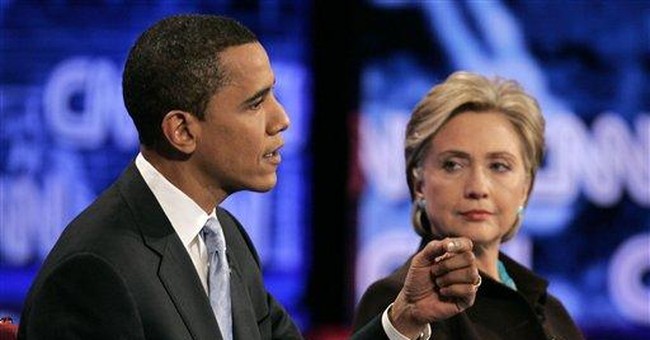 If Barack Obama were a state, he'd be California, said Maria Shriver as she endorsed Obama last weekend.

But what if Barack Obama were white? What if Hillary Clinton were a man? What if John McCain were a woman? What if Mitt Romney were a black female Baptist?

The "what if" question is useful across the board as voters wrestle with identity politics. I don't mean to be flippant, but rather to suggest that we are more biased than we admit and that just possibly our bias interferes with judgment.

We keep hearing that Obama's candidacy isn't about race and Clinton's isn't about gender. But clearly this presidential campaign season is about both. It is also about age and religion, in the cases of McCain and Romney, respectively.

Sometimes it isn't possible to separate content from these prisms of perception, as this exercise demonstrates. But removing the lens of personal identity can be instructive by forcing us to focus more intently on substance.

Despite key endorsements from the African-American community, the Obama phenomenon primarily has been about white America, as black author Shelby Steele recently noted.

"There is this (white) need, this driving hunger, to somehow get this race thing resolved, to redeem the country, to get beyond it. ... That's (the) phenomenon," he said in an interview with the Hoover Institution's Peter Robinson.

Voting for Obama because he's a black man may be defensible for all those reasons. He is also capable of inspiring hope and unity, no small things, and seems to take a thoughtful approach to issues. But would a white Obama -- and the most liberal member of the Senate, according to National Journal -- be acceptable as the leader of the free world?

It may be that Americans want to see a woman in the Oval Office enough to overlook what is an unremarkable Senate record. They may well figure that she's smart enough and note that Clinton consistently has surpassed her male challengers in debate.

Liberals may find her standing as the 16th-most-liberal senator acceptable and bet that she will keep her word to withdraw troops from Iraq no matter what generals on the ground say.

But they shouldn't fool themselves into thinking that Hillary Clinton would be their first choice for president were she not a woman and the wife of Bill Clinton.

A female John McCain also probably wouldn't be running for office, because most 71-year-old women have better things to do. And, let's face it, at no time in these United States would a 71-year-old woman be elected to the presidency. We simply have a different standard for women than for men when it comes to age.

Those who tilt toward McCain do so precisely because of his manly record as a prisoner of war. His voting record, which can be viewed as reaching across the aisle, is seen by many conservatives as something else. National Journal, which also calculated Clinton's ranking, couldn't rate McCain because he didn't vote enough in 2007. His 2006 conservative score, however, was 56.7 (meaning that he was more conservative than 56.7 percent of other Republican senators).

Finally, Romney as a black woman Baptist would be the ideal candidate. She'd kill both birds -- race and gender -- for all time, and her religion would be a nonissue.

More to the point of what a presidential race should be about, she would be admired for her intelligence, her executive record as a governor and as the woman who bailed out the Olympics. We'd adore that in a woman.

A female Mitt Romney would also be attractive, well put together, disciplined, neatly dressed and carefully coiffed. We like that in women better than men, apparently. Mostly we would like that she had made such a success of her life while staying married to the same man, her high school sweetheart, and raising five exemplary children. We give white men little credit for those same accomplishments.

Some may be able to justify all these biases as recompense for past inequalities, but we shouldn't be confused about why we vote a certain way.

Far from transcending race and gender, we have made them our political masters.