Katherine Blakeman
|
Posted: Oct 25, 2017 12:00 PM
Share   Tweet
The opinions expressed by columnists are their own and do not necessarily represent the views of Townhall.com. 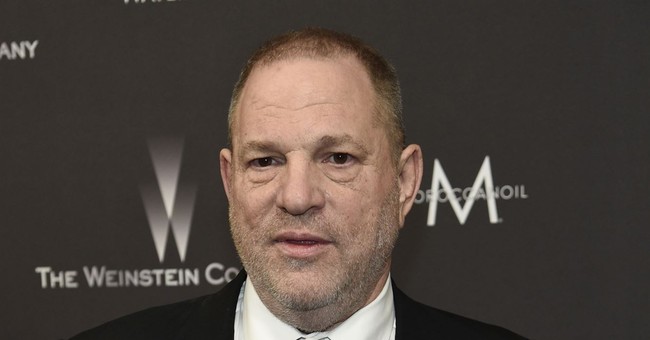 If reports are true that Hollywood producer Harvey Weinstein sexually assaulted many women over his lifetime in the movie business, what is it that drove him to do so? The larger question is, why are sexual assault and sexual harassment so prevalent in our society, so much so that the Weinstein scandal incited a #MeToo social media campaign generating over 12 million posts from women all across our society?

It is an important question, the answer to which could change culture and save lives. I would argue that men who sexually harass or assault women are products of our pornified culture, one that teaches boys, and girls, that a woman’s value lies predominantly in her sexuality. Some men valiantly resist our pornified culture’s influence; others run to it.

Thankfully, I never met Harvey Weinstein in person. But we are fooling ourselves if we think that Harvey Weinstein, Bill Cosby, Roger Ailes, and their ilk are the only men in America whose behavior has not been influenced, and their sexual templates warped, by a culture that glamorizes sexual predation, rape myths, and the Playboy lifestyle.

And we are blind if we fail to see how drenched our country is in pornography and hyper-sexualized images, mostly of women.

Young children are now exposed to hardcore (mainstream) pornography at an alarming rate, with 27% of older millennials (age 25-30) reporting that they first viewed pornography before puberty. A nationally representative survey found that 64% of young people, ages 13-24, actively seek out pornography weekly or more often.

A meta-analysis of 46 studies reported that the effects of exposure to pornographic material are “clear and consistent,” and that pornography use puts people at increased risk for committing sexual offenses and accepting rape myths. A 2015 meta-analysis of 22 studies from seven countries found that internationally the consumption of pornography was significantly associated with increases in verbal and physical aggression, among males and females alike. And fraternity men who consumed mainstream pornography expressed a greater intent to rape if they knew they would not be caught than those who did not consume pornography.

But Weinstein, his scandal, and corrupt Hollywood culture should not be the main topic of our national conversation. They should merely springboard the search for solutions to our nation’s cultural maladies and the repercussions for women of many men’s attitudes of sexual entitlement.

We are inundated with hyper-sexualized images of women on magazine covers during every trip we take to the grocery store. Simple, often unrelated, Google or YouTube searches instantly produce sexually graphic images. Even children are not immune from exposure to sexually graphic content at home or on school-issued computers and devices.

That’s why my place of employment, the National Center on Sexual Exploitation, has called on Google’s YouTube, Amazon, Twitter, and other mainstream companies to stop facilitating and mainstreaming sexual exploitation. Did you know Amazon sells books featuring collections of eroticized child nudity and pimping and sex trafficking how-to manuals? It would be naive to think this has no impact on individuals or on our broader culture.

My fear is that the opportunity to take the discussion deeper, to investigate why so many men sexually objectify women, to question what drives their attitudes of sexual entitlement, is going to slip by, like sand through our fingers at the beach.

We fail to see the connection between our pornified culture and sexual assault at the expense of present and future victims of sexual abuses. It is not enough to take out our frustrations on Hollywood and Harvey Weinstein, or to express our solidarity through social media campaigns. We must wake up to the fact that our pornified culture makes predators out so many people who might otherwise have led constructive, healthy lives.

Please, let’s not let that happen.