'Danger Dyslexia': Toy Guns are Dangerous, Open Borders Are Not

Karen Kataline
|
Posted: Jan 07, 2019 9:24 AM
Share   Tweet
The opinions expressed by columnists are their own and do not necessarily represent the views of Townhall.com. 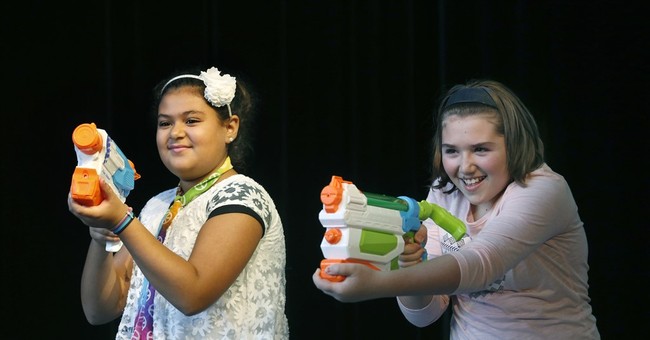 For the third year in a row, Hempstead, New York sponsored a "Toy Gun Buyback” that encouraged kids to give up their toy guns in exchange for toys which Leftists deem to be “safer.” In the spirit of equality some children were given a toy gun so they could trade it in for a “safe” toy.

Hempstead Village Trustee LaMont Johnson said, “The purpose is to offer a safe alternative to toy guns. We don't want the kids playing with guns. Guns are dangerous.” Mayor Don Ryan of Hempstead Village agreed, “Saying no to guns is important, even toy guns.”

Meanwhile, the same liberals who love this kind of political indoctrination theater, enthusiastically support the idea that there is a “safe” way to shoot up IV drugs.

Coming to a city near you and just approved in Denver by the Democrat city council, is a proposal for a safe injection site, which would be the first of its kind in the nation. If approved by the Democrat-controlled Legislature, the program would allow addicts to defy federal law and inject heroin, methamphetamine or other illicit drugs in a “supervised environment.” In case of an overdose, they would be brought back from the brink of death. If they don't overdose that day, it's counted as a success. In any case, they'll never be called junkies, as that would “stigmatize” them.

This deadly, dangerous, screwball idea is patterned after an existing site in Vancouver aptly called “Incite.” Google and the Left (often one and the same) are so strongly in support of this idea that it is difficult to find articles that oppose it.

Buried under numerous pages of articles extolling the virtues of these sites, are articles like one by Jason Rantz, who visited the Vancouver site to see for himself. He urges anyone who thinks this is a good idea to do the same.

Rantz was appalled not only that addicts are being enabled to continue their deadly habit, but at how Incite has affected the surrounding neighborhood. He observed the area at 9:45 in the morning and described it as a “one-stop shop to feed your heroin addiction.” He witnessed an open drug deal and dozens of homeless people, some lying nearly lifeless, others dazed and meandering. He saw litter everywhere and observed some tourists being harassed by the homeless.

Another idea the Left thinks is perfectly safe is the subversion of our current immigration laws to allow an endless stream of unvetted illegal aliens into our country. That includes MS-13 gang members whom Nancy Pelosi and Chuck Schumer have defended because they ought not be referred to as “animals.”

Massive amounts of drugs are also coming through our porous southern border. They will be in even greater demand when we get all those “safe drug injection sites.”

While the relentless Left has been lecturing us about the danger of toy guns, they have assiduously avoided focus on the death of innocent Americans, native-born and naturalized alike, such as Kate Steinle or the recent murder of police Corporal Ronil Singh of the Newman Police Department. Singh was a legal immigrant from India who worked hard to learn English and become a cop. He was murdered by an illegal alien gang member with a real gun.

To today’s American Left, what is dangerous isn’t, and what isn’t dangerous, is. They can usually be counted upon to defend criminals and ignore mortal dangers to law-abiding citizens. Their positions from issue to issue are devastatingly contradictory, though never coincidental.

When anti-gun liberals entice grade-schoolers to give up their squirt guns and foam master blasters, they assume those kids will be less likely to own a gun when they grow up. They also hope these future voters will be more likely to support policies to increase restrictions on private firearms ownership until it is banned altogether.

The Left has it exactly backwards when they lecture us on the definition of danger. In fact, it’s so pathological that we ought to call it “Danger Dyslexia”: A disorder that causes people to enact policies that threaten the lives of law-abiding citizens while simultaneously working to impose other policies that leave those citizens defenseless.

Some on the Left intentionally create Danger Dyslexia in others by muddying the waters about what used to require little more than common sense. Not coincidentally, it's easier to confuse people when they are already high or stoned.

The next time the Left instructs us about the danger of toy guns or about safety in general, we ought to first recognize that they’re just toying with us.