Karen Kataline
|
Posted: Jul 31, 2018 9:35 AM
Share   Tweet
The opinions expressed by columnists are their own and do not necessarily represent the views of Townhall.com. 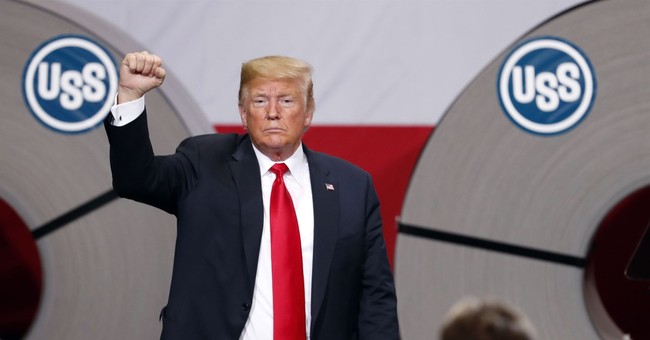 One might expect that the sheer volume of vitriol, hatred and “resistance” coming from the media, Hollywood elites, establishment Republicans, and various other “never-Trumpers,” would be in response to the most unfit and dangerous President we’ve ever had. Some from the aforementioned groups are probably nodding their heads in agreement already.

You would think we had a President who has exhibited open hostility to our country; who has actively worked to diminish our standing in the world, or who has tried to fundamentally change our country into a globalist, socialist state which would no longer resemble anything our Founders ever intended.

Maybe that hysteria would be warranted if we had a President who sent boatloads of cash to a foreign power that publicly vowed to destroy us with nuclear weapons; or whose administration gave 20% of our uranium to Russia (yes, Russia) for a quick political payoff.

Such hatred might be justified if we had a President who allowed the leaking of highly-classified information to other countries who are openly hostile to us, like China; or who didn’t bother to lift a finger to save our US Ambassador and three others who were savagely murdered in Libya; or who abused the power of his office to spy on and punish his political opponents. Those might be justifiable reasons for their “righteous” anger and indignation.

Some would argue that we had just such a leader in the previous administration who, despite rhetoric to the contrary, delivered exactly those results and more. Yet, there was barely a whimper from this cadre of resistors. They protected him, covered up his bungles and betrayals and more often ignored them completely.

Now, with President Donald Trump, calls for impeachment are commonplace. We have yet to see any limit to their outrage.

Along with that has come a curious, and to some, welcome honesty about the ideology that is supported by the current Democrat Party. They are avowed socialists and have finally begun to admit it. Gone are the covert buzzwords and camouflaged slogans like: “income inequality” and “You didn’t build that!"

Part of their irrational hostility to Trump is precisely because he is pro-American and an unapologetic capitalist. That stance demands secure borders, requires peace through strength, and must nurture capitalism and industry. The supposedly non-ideological Trump has furthered that agenda with clear conviction. When we have returned to our ideological roots of less government and more freedom, prosperity has been the predictable result.

Our side has been asleep at the wheel for decades in educating the next generation about the horrific history of socialism. In fact, we know that in many classrooms, socialism has been openly promoted. Such ignorance and indoctrination has never been more on display than it is right now.

The division of Germany after World War II is one of the best practical comparisons between these disparate ideologies. The almost 30-year contest between socialism and capitalism brought results that were dramatic and indisputable. The Communist-controlled socialism of East Germany brought poverty, despair and a wall to keep people in against their will. Capitalism brought the exact opposite.

Today, Trump has handed us another opportunity to compare these ideologies in modern-day and practical terms. Once again, the results are incontrovertible.

Our growing prosperity is putting our stable of Never-Trumpers in a tough spot. Even the most disengaged and uninformed citizens would laugh at the notion that the last administration deserves the credit for this. Openly hoping for war and poverty rather than peace and prosperity under Trump isn’t a particularly winning message, especially in an election year—though some have actually done so like Bill Maher. About the only strategy left is to ignore, downplay, or simply refuse to report all the good news and hope Americans will hardly notice. Color me skeptical, but I don’t think that’s going to work either.

Donald Trump is dragging us kicking and screaming into peace and prosperity. Never has such success been so unwelcome by so many. For the sake of generations to come, and as he continues to succeed,  it will be just as important for roughly half of us to educate the other half about how and why it worked.