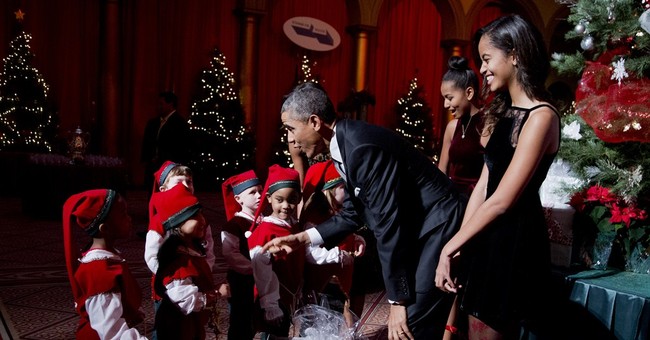 Hide your Santa’s, hide your reindeer, and take down your wreaths …because big government is regulating everything! That’s right, the government is now turning all its nanny state hate towards the holiday season – and in a move that would make even the Grinch blush, President Obama’s bureaucracy is proposing new regulations on the use of traditional Christmas lights and other holiday decorations.

This month the Consumer Product Safety Commission (CPSC) un-wrapped new proposed federal regulations that if enacted, would categorize certain Christmas lights and other “seasonal decorative lighting products” as posing a “substantial product hazard” to the public at large. The CPSC defines such a substantial product hazard as one that “creates a substantial risk of injury to the public,” including “lighted decorative outfits, such as stars…light sculptures, blow-molded (plastic) figures, and animated figures.” Clearly the feds are in tune to the imminent and deadly threat that inflatable Santa’s and Snowmen pose to the public at large.

The rule, in a holiday sneer, goes so far as to define a “seasonal (holiday) product” as a “product painted in colors to suggest a holiday theme or snow covering, a figure in holiday costume, or any decoration associated with a holiday or particular season of the year.”

The CPSC’s proposal outlines a slew of beloved decorations that will no longer be use compliant, including Christmas lights such as incandescent or LED lights, light sculptures, and light accessories that typically are used to frame the holiday cheer experienced in millions of homes each year – I guess someone will have to break the news to Clark Griswold and the gang.

Yet the CPSC doesn’t stop there, the regulatory restrictions on holiday regalia extend to lawn decorations as well such as pre-lit Christmas trees, light up stars, and the aforementioned blow up Santas and Snowmen. The CPSC’s proposal also lists pre-lit “wreaths and menorahs” as being non-compliant with the proposed standards – possibly trying to get ahead of the exploding wreath and menorah epidemic we’ve been so lucky to have avoided these last few years.

This is not to say that the health and welfare of American consumers is not important. In fact, the CPSC’s own proposal concedes the number of deaths related to Christmas lights is about one person annually.

And while one death is tragic, it seems the CPSC would be behooved instead to issue safety guidelines (by comparison, grills that sent almost 17,000 people to the emergency room in 2012) instead of cracking down on a product that fills the hearts of millions of children each year with nostalgic holiday wonder.

So why, while most of us are looking forward to a little holiday cheer, would the federal government be obsessed enough with Christmas lights to propose such regulations? Maybe the Fed and the CPSC are in cahoots with the Grinch, or that abominable snowman from the Rudolph Movies, or maybe even that disgruntled elf Hermie – he always seemed anti-holiday. Then again, perhaps they are secretly dying to earn a lump of coal in the wake of the unworkable, job-killing EPA regulations the administration rolled out earlier this year.

Kidding aside, the real answer appears to be that the regulators simply can’t help themselves – with these heavy-handed Christmas decoration rules just the latest characteristic symptom of a regulation happy federal government that has enjoyed unbridled authority the last few years to interfere with the day to day decisions of American families and small businesses.

Here’s hoping the American taxpayers say no to Washington, DC’s anti-holiday humbug. After all, what would the American holiday experience have been reduced to all these years if Snoopy was unable to decorate his dog house, or if Old Man parker in A Christmas Story hadn’t been able to display his “major award” in the window for all the world to see!