Justin Haskins
|
Posted: Nov 06, 2017 12:01 AM
Share   Tweet
The opinions expressed by columnists are their own and do not necessarily represent the views of Townhall.com. 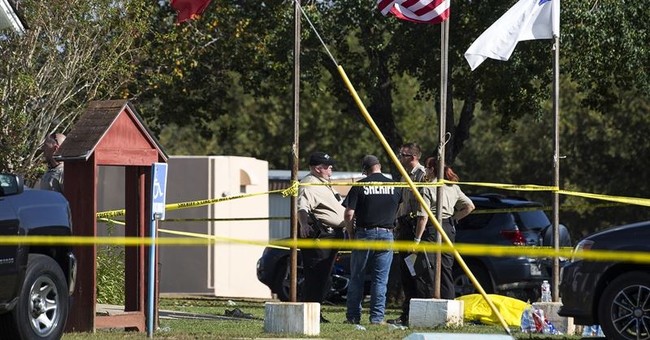 There’s literally nowhere in the United States in which a tragic mass shooting isn’t possible. The horrifying attack on Sunday at First Baptist Church in small-town Sutherland Springs, Texas, proves that. It’s clear something needs to be done to help stop similar attacks from happening in the future, but the path forward continues to be a major source of contention between those who want to expand government’s power in our lives and those who oppose such assaults on freedom.

Lawmakers and pundits on the left have already started to call for increased gun control laws that would strip law-abiding citizens of their Second Amendment rights in the name of protecting innocent Americans. But, as Benjamin Franklin once rightfully observed, “Those who would give up essential Liberty, to purchase a little temporary Safety, deserve neither Liberty nor Safety.”

No matter what progressives say, the data clearly shows having stricter gun laws doesn't prevent violent crime. If it did, then states with lax gun laws should have high violent crime rates compared to states with stricter gun laws but similar demographics. That’s not the case, however. For instance, the Law Center to Prevent Gun Violence, a group that advocates for gun control, gave in a recent gun control report card “F” grades to five of the six states with the lowest homicide rates. The sixth state, New Hampshire, received a “D” grade. If these states’ gun laws are so dangerous, why are there so few homicides in these states?

Strict gun control laws don’t prevent mass shootings, either. Statistician Leah Libresco pointed out in a Washington Post op-ed published earlier in 2017 the data shows Australia and the United Kingdom have not experienced fewer mass shootings, despite having recently restricted gun ownership using laws that would be considered extremely controversial in much of America.

“I researched the strictly tightened gun laws in Britain and Australia and concluded that they didn’t prove much about what America’s policy should be,” Libresco wrote. “Neither nation experienced drops in mass shootings or other gun related-crime that could be attributed to their buybacks and bans.”

Perhaps most importantly, gun control laws, whether effective or not, restrict essential, inalienable rights that belong to every American adult. Even if one could show gun control laws work, this fact alone would be enough to persuade me to oppose such measures. After all, if reducing gun violence is a good excuse for limiting gun rights, then why not enact another prohibition to stop alcohol-related deaths? Why not ban most knives to stop stabbings? (According to the FBI, more than 1,600 people were murdered by knives in 2016 alone!) The potential limits on liberty would be endless.

With that said, if the people of the United States want to tackle the nation’s growing mass-shooting crisis, they can, but it will require making a few fundamental changes to the way we think about safety.

For starters, Americans need to embrace gun ownership, not shy away from it. This doesn’t mean the standards for purchasing guns should be lowered, but it does mean more responsible people should take firearms courses and learn how to protect their neighbors effectively and safely. Gun clubs and other similar organizations should engage in more community outreach events and learn to be more inclusive about membership.

Similarly, communities, organizations, and events that know they might be targeted by murderers (including churches, unfortunately) must start taking security more seriously. When possible, security should be hired. When that’s not feasible, certain individuals, ideally armed Americans, should act as volunteer security officers who can act as a last line of defense.

These two measures could be incredibly successful at preventing mass murders. Some researchers estimate there are more than 2 million defensive gun uses in the United States every year. On the lowest end of the spectrum, the National Crime Victimization Survey claims there are more than 67,000 instances in which guns are used to defend life or property annually, far more than the number of legal gun owners who murder innocent people (just a fraction of the 11,000 total gun murders in 2016).

Third, state lawmakers should pass laws enhancing the punishments, including financial penalties, applied to those who knowingly (and it’s very important “knowingly” is clearly defined) sell firearms to people who are prohibited from purchasing those weapons.

Rather than try to legislate guns out of existence, a task that would be virtually impossible in the United States—a nation with hundreds of millions of guns—responsible Americans should take security into their own hands, and organizations that can afford to pay for professional security should do so.

When it comes to stopping gun violence, a more responsible citizenry is the answer, not more government-imposed mandates.

Justin Haskins (Jhaskins@heartland.org) is executive editor and a research fellow at The Heartland Institute.