Is the Rise of Socialized Medicine Unstoppable?

Justin Haskins
|
Posted: Apr 05, 2016 9:46 AM
Share   Tweet
The opinions expressed by columnists are their own and do not necessarily represent the views of Townhall.com. 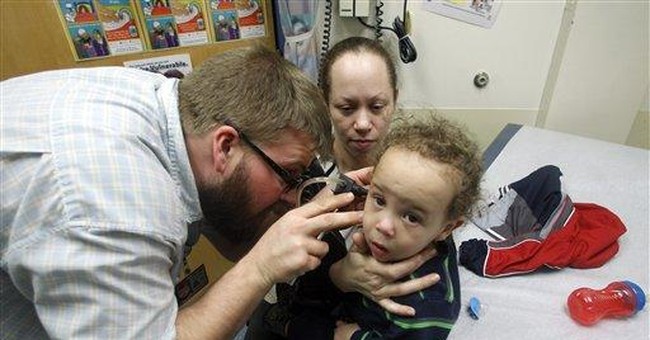 In August 2007, then-Sen. Barack Obama expressed his hope for the growth of socialized medicine in the United States. “[Health care] is a $2 trillion part of our economy, and it is my belief that it’s not just politically, but economically, it is better for us to start getting a system in place—a universal health care system signed into law by the end of my first term as president and build off that system to further to make it more rational … By the way, Canada did not start immediately with a single-payer system. They had a similar transition step.”

Despite claims to the contrary, the Affordable Care Act (ACA) is that “transition step” toward a single-payer socialized medical system in the United States. Based on available data, it appears medical socialism is now closer than ever.

In 1995, 41.6 million American adults and children were enrolled in Medicaid, and there were about 37.6 million people in Medicare. Together, Medicaid and Medicare beneficiaries represented about 29 percent of the total U.S. population.

Today, Medicaid enrollment, including enrollment in the Children’s Health Insurance Program (CHIP), is about 72 million, a 72 percent increase since 1995. The growth in the number of older Americans has led to a large increase in Medicare enrollment, which now stands at 55.5 million.

The total percentage of the U.S. population receiving all or nearly all of their medical coverage from the government through Medicaid, CHIP, and Medicare is now close to 40 percent. At current growth rates, figured conservatively, that figure should surpass the 50 percent mark by 2035. If the number of people not enrolled in Obamacare but who receive ACA subsidies to offset health insurance costs are counted—about 18 million are projected to fall into this category in 2017, according to the Congressional Budget Office—more than half the nation will likely rely on government for health care within the next decade.

The United States is clearly moving rapidly toward European-style socialism, and the costs are already beginning to pile up. Not only are health insurance premiums and wait times for primary care doctors on the rise, the 2016 federal deficit is expected to grow for the first time since 2009, coming in at around $544 billion, an increase of more than 20 percent from 2015.

How can a government steeped in debt continue to pay health care bills for a growing number of Americans? Socialism offers only three options: cut benefits, reduce quality of care, or both. Many doctors are now refusing to take on additional Medicaid patients because of low reimbursement rates, and Obamacare’s $716 billion cut to Medicare payments, scheduled to occur from 2013 to 2022, is greatly reducing access for many seniors, as Alyene Senger, a research associate with The Heritage Foundation, reports in a new Issue Brief.

“Despite the constant political rhetoric that Medicare payment reductions affect only providers and not beneficiaries, funding cuts for Medicare services will directly affect those who depend on those services,” wrote Senger. “If Obamacare’s major reductions are implemented by Congress over the coming decade, seniors’ ability to access Medicare services will surely diminish. In fact, the Medicare Trustees project that the lower Medicare payment rates would cause 15 percent of hospitals, skilled nursing facilities, and home health agencies to become unprofitable by 2019, and this percentage would reach roughly 25 percent in 2030 and 40 percent by 2050.”

Obamacare continues to expand health insurance coverage, but it’s also driving health care providers and insurers out of the marketplace. If everyone is insured, but obtaining quality health care services becomes increasingly more difficult, what’s the point of expanding coverage at all? As more people enroll in Medicare, Medicaid, and CHIP, government agents and elected officials will be empowered and compelled to take even greater control of the health care marketplace—both to limit costs and to force health care providers to offer services at a loss.

The only way to save the U.S. medical system is to completely reverse course on Obamacare and enact in its place a variety of pro-liberty, free-market reforms. The Affordable Care Act should be repealed; federal Medicaid funds should be block-granted to the states so that each may formulate policies specifically designed for its own unique population; health insurance companies should be allowed to compete across state lines; direct primary care should be legalized and embraced; and tax-free health savings accounts should be made available to every American, with a guarantee the funds will remain secure and can be rolled over year-to-year.

It’s not too late to stop the rise of socialism in the U.S. health care system, but time is running out.