For Hispanics, There is Only One Choice This Election: Trump

Julio Rivera
|
Posted: Oct 30, 2020 12:01 AM
Share   Tweet
The opinions expressed by columnists are their own and do not necessarily represent the views of Townhall.com. 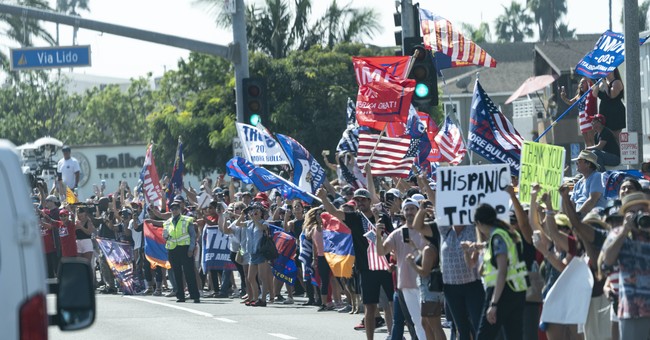 Hispanic voters have long been used and abused by the Democratic Party. Promises have continually been made and broken, and the abuses and exploitation of one of the country’s largest voting blocks has stretched through several generations.

Election after election, we are told the same story about how in voting for the evil, white males in the Republican party, we are working against our supposed “interests.” This cooked up narrative fails to acknowledge the diversity currently seen in the GOP, where since the year 2000, a total of three Hispanics, one African-American, and one Native-American, have served in the legislative branch’s upper chamber.

To a lesser extent, the same arguments are made by Democrats towards their female constituency, but even there the GOP can counter the left’s “patriarchy” narrative with a solid seven female senators currently in office.

The tactics used by the left to further these false narratives have only grown more insidious after the great awakening of 2016, which brought the clearest rebuke towards the American ruling class since the American Revolution and installed a political outsider, Donald J. Trump, as president.

Perhaps the worst example of this was the heartless self-mutilation executed by leftist politicians on the Island of Puerto Rico in the aftermath of 2017’s devastating hurricane season. Amid grumblings that politicians were withholding supplies from the general population in an effort to attempt to distribute them first to citizens who donated their campaigns, it was eventually learned that “thousands of sealed cases of water bottles, pallets of food, diapers, baby formula and cots” were hoarded and hidden in a 43,000 square foot warehouse in the city of Ponce.

This scandal, which led to the justified firing of the Puerto Rico’s chief of emergency management, Carlos Acevedo, by Governor Wanda Vazquez, also saw the Island’s National Guard unit called to temporarily oversee the agency as the investigation into the mishandling of aid was conducted.

Many have argued that the seeds for the immeasurable suffering endured by the people of Puerto Rico were actually planted by the corrupt Puerto Rico Electric Power Authority (PREPA), that raised $10 billion in public bond sales and private sector financing that was supposed to be used to modernize and secure the Island’s crumbling electricity infrastructure.

Instead, the company mismanaged the billions in plain sight of the Puerto Rican political machine, which included indirect kickbacks to politicians via family members, some who were paid as much as $300 an hour more than market rates for work as electric linemen.

As a result of all of these scandals, Puerto Rico Governor Wanda Vasquez, when asked which candidate she felt would help the island in its hardest moment, officially endorsed President Trump in next week’s election.

This endorsement may potentially have an impact with voters in the swing state of Florida, where many Puerto Ricans fled to in the aftermath of Hurricane Maria, and where early voting results already look positive for the President.

The Democrats have also shown their hypocrisy towards the Latino community in the handling of the ongoing illegal immigration crisis at our southern border.

The Democrats, who have long claimed to be the champions of the so-called “dreamers,” the beneficiaries of President Obama’s Deferred Action for Childhood Arrivals executive decree who were left in a state of permanent 2nd class existence when Trump’s opponents in Congress balked at the president’s 2018 comprehensive immigration proposal that sought to grant legalization for up to 1.8 million illegal residents, including the estimated 600 to 800 thousand “dreamers.”

Democrats refused support for the president’s proposed legislation based on the fact that the sweeping reform bill called for $25 billion in funding for a southern border wall, as well as an end to many current immigration policies, including chain migration, which have an adverse effect on the American job market, in addition to causing a swell in entitlement spending. Many of these same hypocritical Democrats have voted this year for billions in wasteful spending that was attached to the various coronavirus relief bills that have added trillions to the national debt.

Hispanics, Latinos, or whatever you want to call us, deserve much better. Many, including large percentages in the New York metropolitan area where I grew up, have spent decades dependent on government programs that barely maintain them at subsistence levels. Unfortunately, politicians like New York City Mayor Bill de Blasio and Governor Andrew Cuomo see no problem with the status quo.

While the 2016 “Great Awakening” mainly resonated in the middle of the country, the time has now come for Brown America to join the pro-citizen movement and empower themselves via Republican and Conservative principles.

Julio Rivera is a business and political strategist, the Editorial Director for Reactionary Times, and a political commentator and columnist. His writing, which is focused on National Security and Politics, has been published by websites including The Hill, Breitbart, Real Clear Politics, Newsmax, American Thinker, Townhall, The Washington Times and BizPacReview.