Mistakes of the Past Are Back 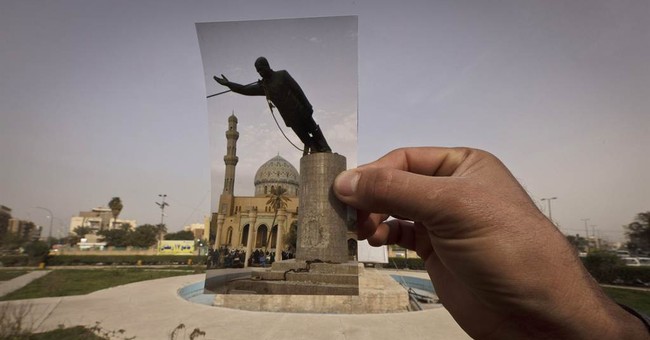 What if the American invasion of Iraq had nothing to do with weapons of mass destruction? What if whatever weapons of mass destruction Saddam Hussein once had were sold to him in the 1980s by American arms dealers with the express permission of the U.S. government? What if he no longer had them when the U.S. invaded? What if the principal reason for invading Iraq was to depose Hussein because he tried to kill President George H.W. Bush, whose son ordered the invasion?

What if another reason for the invasion of Iraq was to enable western-allied governments to control or receive oil from Iraq? What if the Bush administration lied to the American people, Congress, the U.N. and governments of other nations in order to persuade them to support the invasion? What if the Bush administration knew all along that Hussein posed no threat to the stability of the Middle East or the freedom or security of the U.S.? What if Hussein was, in fact, a stabilizing force in the Middle East?

What if the American invasion violated the moral precepts of the Just War, precepts accepted in Judeo-Christian teaching and culture for more than 500 years, and that have underpinned international law for more than 100 years?

What if the invasion killed 4,500 Americans and 650,000 Iraqis, and injured 40,000 Americans, displaced 2 million Iraqis and destroyed more than $100 billion in Iraqi property? What if that invasion, which cost more than one trillion borrowed U.S. dollars, degraded the Iraqi military?

What if the Middle East has been the scene of a 1,000-year-old religious dispute between two branches of Islam: the Sunni and the Shia? What if under Hussein the Sunni persecuted the Shia and also persecuted a third group in that region, the Kurds? What if Hussein used the weapons of mass destruction that American arms dealers sold him to gas thousands of Kurds? What if the Shia now persecute the Sunni?

What if Iraq is not a country of people with common cultures and interests and generally accepted borders, but rather an amalgam of warring groups cobbled together by British and American diplomats? What if only a strongman like Hussein -- however evil and ill suited for government by Western standards -- can keep peace and stability in an artificial country like Iraq?

What if that stew -- which has been known by different names, but is now called ISIS -- included not only fighters from all over the Middle East and Africa, but also from the current Iraqi military and from Hussein's military, which U.S. forces thought they had defeated or dispersed? What if many of those former Iraqi military forces brought their American-made and American-paid-for military equipment and their American military training with them into ISIS?

What if, in the 11 years since the U.S. invaded Iraq and in the 13 years since the U.S. invaded Afghanistan, American troops have been training new Iraqi and Afghan armies? What if during that time of training many of those U.S.-trained troops joined the ISIS resistance? What if the U.S.-trained troops that stayed in the Iraqi military are really a rag-tag band of second-rate soldiers who are unable to defend the Iraqi government against ISIS? What if President Obama's military advisers have told him this?

What if the forces in the U.S. who believe the military is best when it is fighting are again beating the drums for war in Iraq? What if Obama's present plans are to arm and train moderate Syrian rebels and induce them to fight ISIS on the ground while the U.S. provides air cover? What if the U.S. really cannot tell the moderate Syrian fighters from the fanatical Syrian fighters? What if they are one and the same fighters, whose moderation or fanaticism changes with the politics and military needs of the moment?

What if the government here cannot recognize its failures? What if a people who cannot understand the mistakes of the past are doomed to repeat them? What do we do about it?

Andrew P. Napolitano, a former judge of the Superior Court of New Jersey, is the senior judicial analyst at Fox News Channel. Judge Napolitano has written seven books on the U.S. Constitution. The most recent is "Theodore and Woodrow: How Two American Presidents Destroyed Constitutional Freedom." To find out more about Judge Napolitano and to read features by other Creators Syndicate writers and cartoonists, visit www.creators.com.

Embarrassing: Biden's Grand Energy Plan Just Got Blown Up...By the French President
Townhall
'This RULES': Beavis and Butthead find out they have 'white privilege' and it's the funniest damn thing you'll see today (watch)
Twitchy
The White House’s Secret Meetings With BlackRock Are a Major Threat to Freedom
Redstate
'Top Gun' Hits Over $1 Billion and the Left Is Going Crazy: Here’s Why
PJ Media