We Must Call Them Regressives, Not Progressives

Joy Overbeck
|
Posted: Aug 22, 2018 12:01 AM
Share   Tweet
The opinions expressed by columnists are their own and do not necessarily represent the views of Townhall.com. 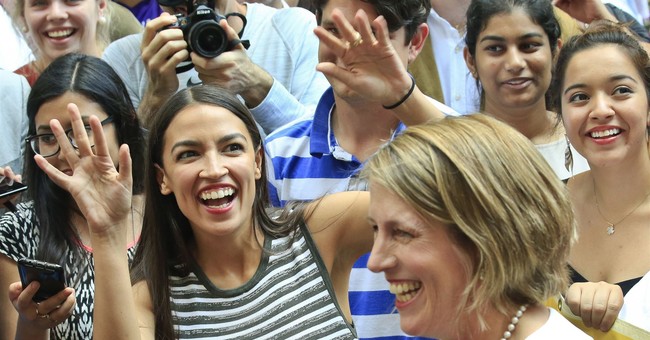 How stunning that many brilliant conservatives are still calling totalitarian leftists “progressives.”  Their dusty, decrepit, freedom-crushing ideas have failed for over 100 years and caused somewhere between 100 million and 120 million deaths – of their own people. This is progress?

It’s time the pundits of the right stop going meekly along with the rebranding of the deadly Marxist ideology that even today has starving Venezuelans fighting in the street for bread and toilet paper.  Today’s lofty-sounding “progressivism,” socialism and “social justice” has a predictable way of morphing into the repressive, liberty-killing tyranny of enforced groupthink we are seeing in America today and ultimately into a society destroyed.

Webster defines “progressive” as “continuous improvement; the development of an individual or group in a direction considered more beneficial than and superior to the previous level.”  And “regressive” is “characterized by backward reasoning.”

The leftists are actually Regressives, not Progressives. Yet as long as we allow them to get away with calling themselves “progressives” we are letting them claim moral and intellectual superiority over us all.

What pray tell is beneficial or superior about black-clad radicals raging against law and order and the police, raining bricks into storefronts to stop a conservative from speaking, or a has-been “comedian” holding up a fake severed head of the president of the United States?  How “superior” is a black member of Congress demanding that “progressive” flash mobs hunt down conservatives – just like her people were once hunted by the southern Democrats? This is the kind of galloping insanity and vicious oppression that prevails in the vilest dictatorships, not in America. Not until recently.

Those who call themselves progressive are busy replicating the tactics of the most destructive regimes that have ever beset an unfortunate nation. How many schoolkids today, or even college students, know that Nazi stands for the National Socialist German Workers Party and that Hitler and his henchmen were committed far-left government-control socialists, not right-wingers? Like the Nazis enforced the superiority of the German “Master Race” over the Jewish people, the modern regressives elevate the superior “rights” of illegal immigrants over the safety of American citizens and insist that the new “right” of “marriage equality” supersedes our constitutionally protected religious rights. Those who deviate from these regressive policy norms, especially Christians, America-Firsters, and Trump fans, must be punished and made an example of.

Weeks after Colorado Masterpiece Cakeshop owner Jack Phillips won a Supreme Court decision that upheld his refusal six years ago to create a cake celebrating same-sex marriage, he has now been targeted again by a lawsuit from a transgender attorney upset because Phillips also won’t make a transgender cake (don’t ask.) Others such as florists and venue providers whose Biblical beliefs don’t allow them to provide services to same-sex marriages are also suffering long court battles. Many are facing bankruptcy and loss of their businesses. Former Mozilla CEO Brendan Eich is another whose career was damaged when he was forced out of his job for supporting traditional marriage. This is how the Nazis first targeted the Jews – destroying their livelihoods by warning customers not to patronize their shops.

The radical regressive socialists, just like the Communists, are determined to end capitalism. They want to replace the system that has elevated more people from poverty to prosperity than any other in the world with the foundational Marxist program: “the dictatorship of the proletariat” – that is, putting the working class in control. Senator and wanna-be president Elizabeth Warren has stepped into the way-back machine to nudge this Marxist/communist goal along, introducing a bill in Congress called the Accountable Capitalism Act. We’ve got multitudes of laws, bureaucratic rules and restraints on capitalism, so many that even ardent price-fixer FDR may have said enough already. But not enough for Warren.

Her bill would create an Office of United States Corporations that would require any company with revenue over $1 billion to obtain a federal charter, binding company directors to “consider the interests of all corporate stakeholders — including employees, customers, shareholders, and the communities in which the company operates.” The bill also requires 40 percent of a chartered company’s directors to be selected by employees and puts restrictions on executive pay. A National Review article by Samuel Hammond notes that “the U.S. is home to 64 percent of the world’s billion dollar privately held companies and a plurality of the world’s billion-dollar start-ups.”  So this law would enmesh most of our corporations.

Warren’s scheme would give the government power to decide whether a corporation could actually exist.  It would forbid entrepreneurs the government power brokers didn’t like from starting companies.Who do you think that would be?  Obama’s IRS showed what happens when the government targets its enemies such as the conservative Tea Parties for reprisal. If the government out of its benevolence would allow a corporation to live and not die, Warren’s bill would rob the shareholders whose investments fund the company of their ability to elect the governing board.

Hammonds’ piece quotes the business ethicist Kenneth Goodpaster who once observed that simply multiplying the number of stakeholders “blurs traditional goals in terms of entrepreneurial risk-taking, pushes decision-making towards paralysis because of the dilemmas posed by divided loyalties and, in the final analysis, represents nothing less than the conversion of the modern private corporation into a public institution.” Which is what the socialists/Marxists/Regressives want.

The Democrats’ new socialist heroine, Alexandria Ocasio-Cortez, as a member of the Democratic Socialists of America (DSA) is singing the same song as Warren and it’s the Internationale.  The offspring of the Socialist Party of America and the Communist Party of America (CPA) that ran Communist Gus Hall for president forever, the SDA, notes Vox, “believes the government should ‘democratize’ private businesses – i.e., force owners to give workers control of them – to the greatest extent possible…the DSA tries to work within the Democratic Party to weaken capitalism.” And guess what, the SDA is a tax-free 501 (c ) 4 – of course!

And here’s another important way the regressives are mimicking Marxists: just like the Chinese Communists in their horrific decade of “cultural revolution” they want to erase the past. As part of the chaos unleashed by Mao to solidify his power, historical monuments and relics were demolished and cultural and religious sites were destroyed. Today radicals pull down statues of Confederate officers, agitate to change the names of towns, buildings and streets if they reflect ideas or people the radicals don’t like.

It’s time we called these those who want to impose on America the dark, tyrannical past that denied individual liberty to millions what they are. They are Regressives.

Joy Overbeck is a Colorado journalist, author and Townhall columnist who has also contributed to The Washington Times, The Daily Caller, American Thinker, BarbWire and elsewhere. More columns: https://www.facebook.com/JoyOverbeckColumnist   Follow her on Twitter @JoyOverbeck1